Making your own Stereoscopic Pictures and Viewer. A stereoscopic picture is one which has depth to it; true 3 dimensions. 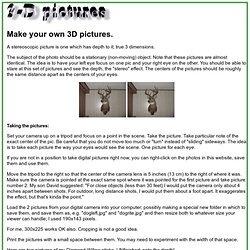 The subject of the photo should be a stationary (non-moving) object. Note that these pictures are almost identical. The idea is to have your left eye focus on one pic and your right eye on the other. StereoViewer. Stereo Viewer Cards SpecialPrintProducts basically makes 2 Forms of Stereo Viewers. 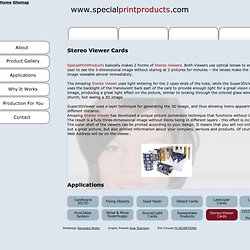 Both Viewers use optical lenses to enable the user to see the 3-dimensional image without staring at 2 pictures for minutes – the lenses make the stereo image viewable almost immediately. The Amazing Stereo Viewer uses light entering for the 2 open ends of the tube, while the Super3DViewer uses the backlight of the translucent back part of the card to provide enough light for a great vision of the 3D Image, producing a great light effect on the picture, similar to looking through the colored glass window of a church, but seeing a 3D image. 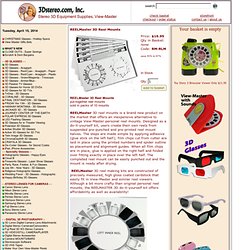 Designed as a do-it-yourself kit, users create their own reels from suspended pre-punched and pre-printed reel mount halves. The steps are made simple by applying adhesive (glue stick on the left half); film chips cut from cutter are laid in place using the printed numbers and spider outline as placement and alignment guides. When all film chips are in place, glue is applied on the right half and folded over fitting exactly in place over the left half. Make Your Own View-Master Reels - by Shab Levy review. Let us Build a Stereoscope. Giorgio Carboni, April 1996 English version revised by Ed Vogel Introduction How take 3D pictures Methods and instrument for stereoscopic observations By the naked eye A simple stereoscope A stereoscope for slides A mirror stereoscope Some stereograms The stereoscope is a simple optical instrument which allows us to see in relief drawings and photographs. 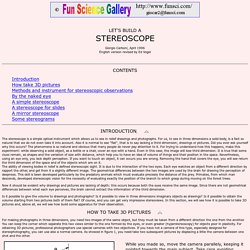 Now it should be evident why drawings and pictures are lacking of depth: this occurs because both the eyes receive the same image. Is it possible to give the volume to drawings and photographs? For making photographs in three dimensions, you need two images of the same object, but they must be taken from a different direction the one from the another. The last figures of this article have been obtained with methods as those we described.

Thereafter we will deal with four techniques for observing stereograms: Keep side by side the two stereograms which should not exceed 6x9 cm. Here some stereoscopic images. The DXG-018 Is a $70 3D Compact for Kids. For many people, shooting 3D is still a novelty, which means spending a lot on a camera capable of capturing the third dimension is kind of a wat. 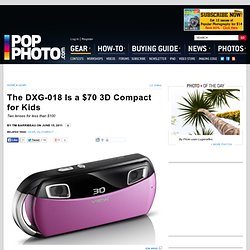 But DXG has come up with a new compact camera that comes at an astonishingly low price, and with a kid-friendly body. The DXG-018 will set you back just $69.99. DXG 3D camera costs 70 bucks, or just three easy payments of $23.99. DXG Creates an Easy and Fun Way to Capture and View 3D Pictures with No 3D TV Required CITY OF INDUSTRY, CA - June 14, 2011 – DXG is bringing the beloved View-Master® back with an exciting technology twist that lets users create and share their own 3D content with the new DXG-018 3D pocket camera and viewer. 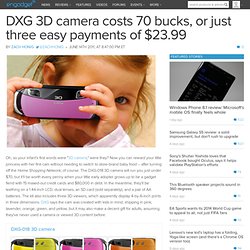 (2) 3D Collectible Promo Viewers-Nightmare on Elm St. 5 W/Error On One~Rare Item. About This Product These were made in June, 1989 by a company called 3D mark for MTI Group a company that dealt with premiums for the video trade at that time. 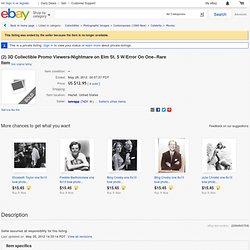 The original name of MTI Group was Movie Tee’s Inc. and I was the president and owner of that company. Movie Tee’s sold the concept of the 3D viewers to the executives at Media Home Entertainment, the video distributor of these films. Media Home entertainment was looking for a unique, low cost premium, to pack inside their new three video promotional pack of Nightmare I, II and III. Make 3D Prints - Viewers & Instructional CD - Fuji W3. View-Master Update. Many months ago, I mentioned a "make your own view-master reels" kit in this post. I finally went ahead and got it, and successfully created my first reel. The kit is comprised of a CD containing a photoshop template, a reel jig, an alignment viewer (just a view-master that's been cracked in half) and a couple of blank reels.

I used the monsterpalooza photos I'd shot the previous week. The photoshop template allows two pairs per frame of 35mm film. Being that a view-master reel contains 7 3D photos (14 pictures) you'd need 4 slides (which actually gives you eight pairs, so you would omit one). View-Master's Last Gasp. Disappointing news from the monkeygoggles blog: Fisher-Price announced recently that they have ceased making reels for View-Master 3D viewers, save for a handful of children's titles. 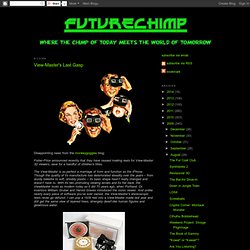 The View-Master is as perfect a marriage of form and function as the iPhone. Though the quality of its manufacture has deteriorated steadily over the years – from sturdy bakelite to soft, shoddy plastic – its basic shape hasn’t really changed and doesn’t have to. With its two protruding viewing lenses and its flat back, the ViewMaster looks as modern today as it did 70 years ago, when Portland, Or. inventors William Gruber and Harold Graves introduced the iconic viewer. His blog: JOURNEY INTO THE THIRD DIMENSION. Mentioning View-Master 3D slides the other day set me thinking about the toy that was so much a part of my '50s/'60s childhood and, in particular, those recreated scenes from Disney animated features that I loved almost as much as the films themselves... 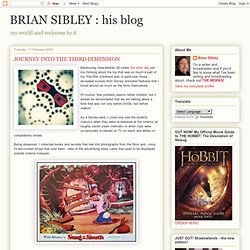 Of course, that probably seems rather childish, but it should be remembered that we are talking about a time that was not only before DVDs, but before videos! As a Disney-nerd, I could only see the studio's classics when they were re-released at the cinema (at roughly seven years intervals) or when clips were occasionally screened on TV (in black and white) on compilations shows. Being obsessed, I collected books and records that had still photographs from the films and - once I'd discovered shops that sold them - sets of the advertising lobby cards that used to be displayed outside cinema marques.

View-Master Custom Template. View-Master Encyclopedia. A KIT FOR MAKING YOUR OWN CUSTOM VIEW. How to show off your images in a retro viewfinder reel Image. File:View-Master-DinNorm.jpg. The Scrappin Cop: CU OK Viewmaster Reel Template. I had a request several months ago from Lisa to create some Viewmaster elements. I did make this template and have been looking for a Viewmaster toy to photograph and extract but the only ones I could find in the stores around here are the modern day Viewmasters and they don’t really look anything like the ones I remember. There are several images on the internet available if you would like to use one for your layouts but unfortunately I don’t think I’ll have a viewer up any time soon.