Hang On Placeholders. I remember when the behavior for placeholder="" text on inputs and textareas made that subtle functionality change in WebKit where the text would remain in place until you started typing rather than disappear on focus of the empty input. 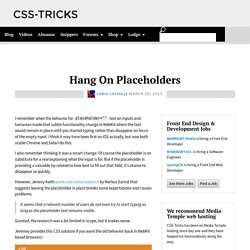 I think it may have been first on iOS actually, but now both stable Chrome and Safari do this. I also remember thinking it was a smart change. Of course the placeholder is no substitute for a real However, Jeremy Keith points out some research by Markus Earnst that suggests leaving the placeholder in place breaks some expectations and causes problems: It seems that a relevant number of users do not even try to start typing as long as the placeholder text remains visible.

Granted, the research was a bit limited in scope, but it makes sense. Jeremey provides this CSS solution if you want the old behavior back in WebKit based browsers: Style The Placeholder Text in Input Fields in Forms with CSS. With CSS you can change the style of placeholder text in form and search fields, the placeholder HTML 5 form attribute is supported in the latest browser versions, how you get text pre-populated in an input field and use the placeholder attribute is explained here. 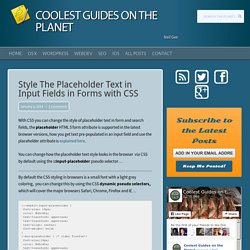 You can change how the placeholder text style looks in the browser via CSS by default using the ::input-placeholder pseudo selector… By default the CSS styling in browsers is a small font with a light grey coloring, you can change this by using the CSS dynamic pseudo selectors, which will cover the major browsers Safari, Chrome, Firefox and IE… So in the example above a few of the CSS rules are restyling the default text font size, color and alignment. Css - Add Bootstrap Glyphicon to Input Box. Introduction to CSS3 Media Queries. Introduction With the increasing popularity of mobile devices, web developers are required to ensure that their website renders well on different devices. 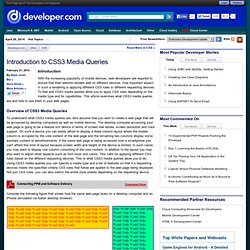 One important aspect in such a rendering is applying different CSS rules to different requesting devices. To that end CSS3 media queries allow you to apply CSS rules depending on the media type and its capabilities. This article examines what CSS3 media queries are and how to use them in your web pages. Overview of CSS3 Media Queries To understand what CSS3 media queries are, let's assume that you wish to create a web page that will be accessed by desktop computers as well as mobile devices. Consider the following figure that shows how the same web page looks on a desktop computer and an iPhone (emulated via Safari desktop browser). Webpage and iPhone Comparison Both of these displays consists of the same <div> element. A media query can make use of media type and media features. Media features include parameters such as: <!

Summary. Generate Pure CSS3 Toggle Button With On/Off FlipSwitch Generator. If you are sick of using buttons to toggle something on or off, perhaps you may find a breath of fresh air in a flip switch instead. 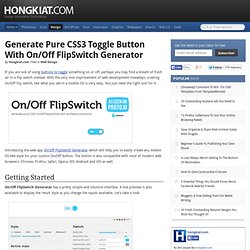 With the very nice improvement of web development nowadays, creating On/Off flip switch, like what you see in a mobile OS is very easy. You just need the right tool for it. Introducing the web app On/Off FlipSwitch Generator which will help you to easily create any mobile OS-like style for your custom On/Off button. The button is also compatible with most of modern web browsers: Chrome, Firefox, Safari, Opera, IE9, Android and iOS as well. 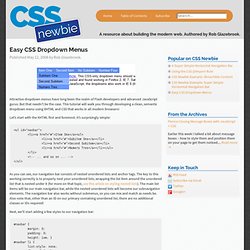 But that needn’t be the case. This tutorial will walk you through developing a clean, semantic dropdown menu using XHTML and CSS that works in all modern browsers! Let’s start with the XHTML first and foremost. It’s surprisingly simple: <ul id="navbar"><li><a href="#">Item One</a><ul><li><a href="#">Subitem One</a></li><li><a href="#">Second Subitem</a></li><li><a href="#">Numero Tres</a></li></ul></li><! As you can see, our navigation bar consists of nested unordered lists and anchor tags. Next, we’ll start adding a few styles to our navigation bar: Here, I’ve removed the margin and padding from the main list, removed all list styling from all the list items, and floated the individual items left.

Next, we can apply some styles to the subnavigation section: Now all we need to do is style the list for its “hover” state: Let’s go through this bit by bit. That’s all it takes! Accessible CSS Forms: Using CSS to Create a Two-Column Layout - replace tables with css layout form tutorial. Summary: Websites have become less accessible and more complex over time according to recent studies. 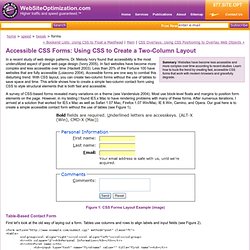 Learn how to buck the trend by creating fast, accessible CSS forms that work with modern browsers and gracefully degrade. In a recent study of web design patterns, Dr. Melody Ivory found that accessibility is the most underutilized aspect of good web page design (Ivory 2005). In fact websites have become more complex and less accessible over time (Hackett 2003). Less than 20% of the Fortune 100 have websites that are fully accessible (Loiacono 2004). Css. 50 Useful Tools and Generators for Easy CSS Development. 25 CSS Snippets for Some of the Most Common and Frustrating Tasks.

In this post we have 25 CSS snippets and hacks that will solve many of the most frequently used and, at times, frustrating CSS development tasks. 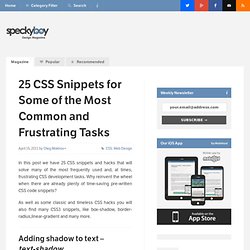 Why reinvent the wheel when there are already plenty of time-saving pre-written CSS code snippets? As well as some classic and timeless CSS hacks you will also find many CSS3 snippets, like box-shadow, border-radius,linear-gradient and many more. Adding shadow to text – text-shadow Helps make your text stand out from the rest. Source Adding an image-based border – border-image You can create any kind of border you want for any object(s) on your website using this.

Adding shadow to borders and images – box-shadow Helps make your borders and images “pop” from the background more, giving a subtle 3D-like visual cue that it’s something separate, in the foreground, and the thing that visitors should be looking at. Adding rounded corners – border-radius Self-explanatory. Adding individual rounded corners – border-radius.