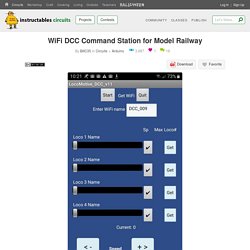 This WiFi version can be run on more than one Android device giving the user multiple DCC throttles.Up to 50 locos may be listed within the App menu. The ESP32s (Node MCU) module creates the local WiFI router and communicates with the App to receive DCC packets. Firstly, you must set up the Arduino IDE to run the code for the ESP32 node Node32S (or NodeMCU-32S) device.

A LEGO® Hogwarts Express powered by magic (and IoT) - Ben Hoad. This project was meant to be started and finished in the space of 3-4 weeks prior to Christmas 2018; I was optimistic at best. This project started out as being a basic Christmas tree train but ended up being so much more. Being a massive fan of LEGO® it was a no-brainer to opt for one of their sets given their well-known quality and consistent standards when it comes to their train kits/tracks. After scoping out the options the Hogwarts Express was the perfect choice given the aim of making the train "smart" would give the illusion of "magic"... ...and it's also just a beautifully detailed model. The end result being a Homekit controlled "smart" LEGO® train that docks to charge when not in use. But how did we get here? The Hogwarts Express kit provided two straight up challenges; firstly, the set isn't motorised by default, and secondly, the kit doesn't come with a track in the box but thankfully it is designed to work on the standard LEGO® train tracks which can be found almost anywhere. 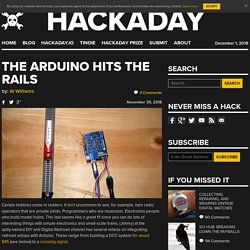 It isn’t uncommon to see, for example, ham radio operators that are private pilots. Programmers who are musicians. Electronics people who build model trains. This last seems like a great fit since you can do lots of interesting things with simple electronics and small-scale trains. [Jimmy] at the aptly-named DIY and Digital Railroad channel has several videos on integrating railroad setups with Arduino. There are actually quite a few basic Arduino videos on the channel, although most of them are aimed at beginners. Model trains pick up electrical power from the rails. To accommodate old equipment, you can stretch the high or low values to make the average voltage either positive (forward) or negative (reverse). The build uses an available Arduino library, so if you want to get into the protocol you’ll have to work through that code. Atanisoft. Model Railroading with Arduino – Combining the Power of Arduino with the Fun of Model Railroading.

Learn about Digital Command Control - DCC - Open source. Internet controlled SCALEXTRIC. You do not need the SCALEXTRIC power supply for this project, so just disconnect it for now. 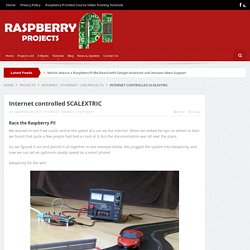 We will be connecting our own power supply. Disassemble the hand-held SCALEXTRIC controller (there are three screws needed to open it). There are three coloured wires on the end of the cabling inside the controller: red, black and green. Each wire with have a tiny flat round plug on the end. You will later screw these wires into the Gertboard headers which are too narrow for the flat round plugs on the end so you may as well cut them off now rather than fiddle about trying to save the controller. That’s the wiring done. If you don’t already have a dataplicity account, get a free dataplicity account here. To set up your Pi, follow the usual dataplicity getting started guide at to connect your Pi to dataplicity, and to register a device class generating a sine wave.

SlotCarGeek.com. Visuino. Untitled. Untitled. LEGO Train Automation - WiFi controlled with NodeMCU (ESP8266) - Internet of LEGO. Going Loco with 3D CAD. Alistair Lofthouse, who lives in Sheffield, is the owner of a small commercial print business called ALD Print which he has run for 25 years after graduating from Sheffield Hallam University in Industrial Design. 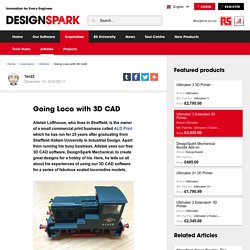 Apart from running his busy business, Alistair uses our free 3D CAD software, DesignSpark Mechanical, to create great designs for a hobby of his. Here, he tells us all about his experiences of using our 3D CAD software for a series of fabulous scaled locomotive models. Building up Steam ‘With changing markets and to improve my businesses capabilities I decided to look at 3D printing and purchased an Ultimaker 2 as a result. The locomotive idea was part of my plan to get familiar with the whole 3D printing and 3D CAD design process.

Using DSM ‘I used the dimensions of the actual locomotive itself plus photographs I had taken of a preserved loco and I scaled it down, creating an A2 plan. SketchUp, TurboCAD and AutoCAD? The Railway Scene Further down the track. Big Ben Bricks LLC. DCC for beginners. DCC for Beginners If you are new to DCC and are wondering what it is all about, this section is for you. 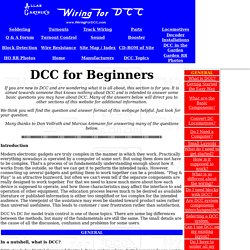 It is aimed towards someone that knows nothing about DCC and is intended to answer some basic questions you may have about DCC. Many of the answers below will direct you to other sections of this website for additional information. We think you will find the question and answer format of this webpage helpful. Just look for your question. Many thanks to Don Vollrath and Marcus Ammann for answering many of the questions below. Introduction Modern electronic gadgets are truly complex in the manner in which they work. Le train miniature et le ferromodélisme - conception, réalisation et décor en modélisme ferroviaire. 2- Construction de la mini centrale - Mon Réseau N avec Arduino. Comme indiqué précédemment, cette centrale prototype est limitée au pilotage de 2 trains, soit en mode manuel avec 2 potentiomètres, soit en mode automatique avec des capteurs, l'un en amont d'une gare pour commencer un ralentissement et l'autre en gare pour s'arrêter. 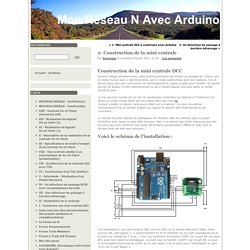 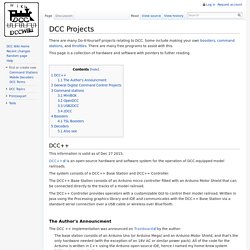 There are many Do-It-Yourself projects relating to DCC. Some include making your own boosters, command stations, and throttles. There are many free programs to assist with this. This page is a collection of hardware and software with pointers to futher reading. This information is valid as of Dec 27 2015. DCC DIY Decoders Home. Combining the Power of Arduino with the Fun of Model Railroading.