I'm from Aledo, Illinois. I'm a media consultant and writer.

The Importance of Public Speaking. Businesses need to generate a consistent number of leads and sales, gone are the days when traditional advertising was all that was needed. 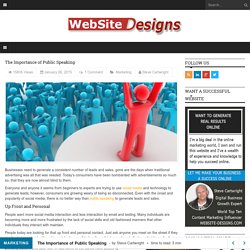 Today’s consumers have been bombarded with advertisements so much so, that they are now almost blind to them. Everyone and anyone it seems from beginners to experts are trying to use social media and technology to generate leads; however, consumers are growing weary of being so disconnected. Even with the onset and popularity of social media, there is no better way than public speaking to generate leads and sales. Up Front and Personal People want more social media interaction and less interaction by email and texting. People today are looking for that up front and personal contact. When you speak publicly you have the option to show facial expressions, your body language, the inflection in your voice and the enthusiasm of what or whom you are selling.

Reinforcing the Message. How to Get People Wanting to Hear Your Music. Hey guys! 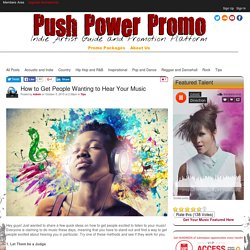 Just wanted to share a few quick ideas on how to get people excited to listen to your music! Everyone is claiming to do music these days, meaning that you have to stand out and find a way to get people excited about hearing you in particular. Try one of these methods and see if they work for you. 1. Let Them be a Judge People like to hold positions of power, even if in small or somewhat irrelevant situations. 2. Try to find out what the person of interest likes in terms of music. 3. Since a lot of music on the internet is free now, especially indie songs, it may not be smart to believe giving away songs is enough of an exchange to get someone's support these days. Mikebertelsendotcom. The Cisco Visual Networking Index™ (Cisco VNI™), is an ongoing initiative to track and forecast the impact of visual networking applications. 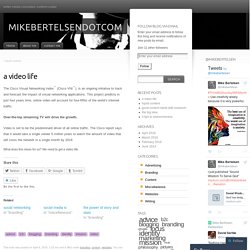 This project predicts in just four years time, online video will account for four-fifths of the world’s Internet traffic. Over-the-top streaming TV will drive the growth. Video is set to be the predominant driver of all online traffic. The Cisco report says that it would take a single viewer 5 million years to watch the amount of video that will cross the network in a single month by 2019. What does this mean for us? Richard Thomas. 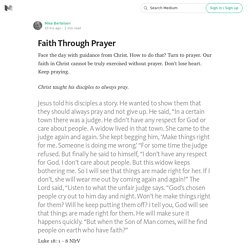 How to do that? Turn to prayer. Our faith in Christ cannot be truly exercised without prayer. Don’t lose heart. Christ taught his disciples to always pray. Jesus told his disciples a story. Luke 18: 1 - 8 NIrV Christ will find people of faith on earth. God will answer prayer and in an answer to man, He will answer speedily.

#MadMen #AMC #entertainment #television The Camaro goes super mainstream. The Illuminati. Professional Human "Go" Player Defeated By a Computer For the First Time — NOVA Next. There’s one game that robots have, at least until now, struggled to beat—an ancient Chinese game called “Go.” 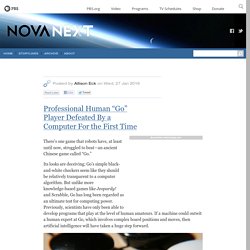 Its looks are deceiving; Go’s simple black-and-white checkers seem like they should be relatively transparent to a computer algorithm. But unlike more knowledge-based games like Jeopardy! And Scrabble, Go has long been regarded as an ultimate test for computing power. Previously, scientists have only been able to develop programs that play at the level of human amateurs. If a machine could outwit a human expert at Go, which involves complex board positions and moves, then artificial intelligence will have taken a huge step forward. The game 'Go' David Silver and Demis Hassabis of Google DeepMind in London have now created such a program, reported in the journal Nature today.

'World's richest 1% own as much as other 99% combined' Edelman's annual "Trust Barometer" survey shows a record gap this year in trust between the informed publics and mass populations in many countries, driven by income inequality and divergent expectations of the future. 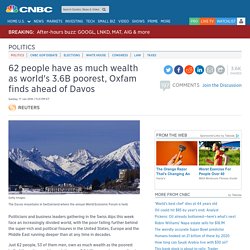 The gap is the largest in the United States, followed by the UK, France and India. "The consequence of this is populism - exemplified by Trump and Le Pen," Richard Edelman, president and CEO of Edelman, told Reuters, referring to French far-right leader Marine Le Pen, whose National Front has surged ahead of traditional parties in opinion polls. The next wave of technological innovation, dubbed the fourth industrial revolution and a focus of the Davos meeting, threatens further social upheaval as many traditional jobs are lost to robots.

The Oxfam report suggests that global inequality has reached levels not seen in over a century. Last year, the organisation has calculated, 62 individuals had the same wealth as 3.5 billion people, or the bottom half of humanity. U.S. Sherlock's darkness is his genius. RUSH - R40 Live. #AMC #Turn Great series #Television #entertainment. #MadMen #GoldenGlobes #JonHamm. Talking Heads 1977 #rockbands #alternativerock #talkingheads. Here's to us having plenty of ideas. #living #life. How the Green Bay Packers redefined strategy execution – and what businesses can learn from it. Why You Shouldn't Trust Facebook Posts About 'Amazing' Relationships. Sorry about this, but there's a new study out that will probably make those who are already unsure about their relationships feel even worse. 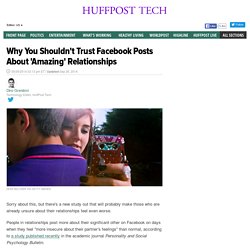 People in relationships post more about their significant other on Facebook on days when they feel "more insecure about their partner's feelings" than normal, according to a study published recently in the academic journal Personality and Social Psychology Bulletin. A group of researchers led by Lydia Emery, a Ph.D. student at Northwestern University, surveyed 108 straight couples at a small university in Canada. The scientists asked each partner to keep their own daily diary for two weeks, writing down how they felt their relationship was going every day. Then they looked at how each participant publicly interacted with their sweetheart on Facebook, tallying up any wall posts, status updates and photo comments made between the couple. The research team saw an uptick in interactions when one partner felt down about his or her relationship.