Uploading and processing data with inotify-tools - post in A Foo walks into a Bar... - blog by Pavel Shved - coldattic.info. I'm not a muscleman. 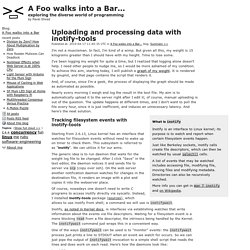 In fact, I'm kind of a wimp. But given all this, my weight is 15 kilograms greater than I should have with my height. Time to lose some. I've been logging my weight for quite a time, but I realized that logging alone doesn't help. I need other people to nudge me, so I would be more ashamed of my condition. And, of course, since I'm a geek, the process of displaying the graph should be made as automated as possible. Nearly every morning I weigh and log the result in the text file. What is inotify Inotify is an interface to Linux kernel; its purpose is to watch and report when certain filesystem events happen. Just like Berkeley sockets, inotify calls create file descriptors, which can then be watched by usual select() calls. A list of events that may be watched includes accessing file, modifying file, moving files and modifying metadata.

More info you can get in man 7 inotify and on Wikipedia. Tracking filesystem events with inotify-tools Local PC: Remote server: Conclusion. Yum - Cannot install inotify on Amazon EC2. Uploading and processing data with inotify-tools - post in A Foo walks into a Bar... - blog by Pavel Shved - coldattic.info. How to use inotify-tools to trigger scripts on filesystem events - In my last example of Bash if statements we created a backup script which would run “rsync” as per the time set in a cron. 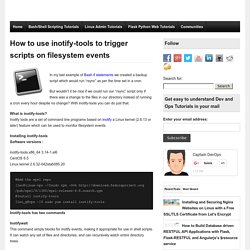 But wouldn’t it be nice if we could run our “rsync” script only if there was a change to the files in our directory instead of running a cron every hour despite no change? Yum - Cannot install inotify on Amazon EC2. How to use inotify-tools to trigger scripts on filesystem events - BASH Programming - Introduction HOW-TO. Next Previous Contents BASH Programming - Introduction HOW-TO by Mike G mikkey at dynamo.com.ar Thu Jul 27 09:36:18 ART 2000 This article intends to help you to start programming basic-intermediate shell scripts. 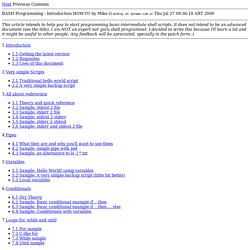 It does not intend to be an advanced document (see the title). Add Jobs To cron Under Linux or UNIX? Cron and Crontab usage and examples. Cron Cron is a daemon that executes scheduled commands. 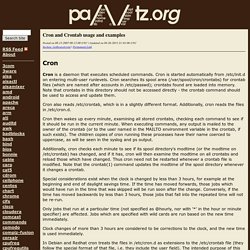 Cron is started automatically from /etc/init.d on entering multi-user runlevels. Cron searches its spool area (/var/spool/cron/crontabs) for crontab files (which are named after accounts in /etc/passwd); crontabs found are loaded into memory. Note that crontabs in this directory should not be accessed directly - the crontab command should be used to access and update them. Cron also reads /etc/crontab, which is in a slightly different format. Cron then wakes up every minute, examining all stored crontabs, checking each command to see if it should be run in the current minute.

Additionally, cron checks each minute to see if its spool directory's modtime (or the modtime on /etc/crontab) has changed, and if it has, cron will then examine the modtime on all crontabs and reload those which have changed. Only jobs that run at a particular time (not specified as @hourly, nor with '*' in the hour or minute specifier) are affected. Crontab.guru - the cron schedule expression editor. 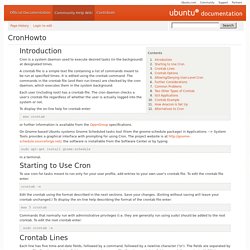 A crontab file is a simple text file containing a list of commands meant to be run at specified times. It is edited using the crontab command. The commands in the crontab file (and their run times) are checked by the cron daemon, which executes them in the system background. Each user (including root) has a crontab file. The cron daemon checks a user's crontab file regardless of whether the user is actually logged into the system or not. To display the on-line help for crontab enter: man crontab or further information is available from the OpenGroup specifications. On Gnome-based Ubuntu systems Gnome Scheduled tasks tool (from the gnome-schedule package) in Applications --> System Tools provides a graphical interface with prompting for using Cron.