Setting up a Hadoop Cluster on Mac OS X Mountain. I have been working on using the Hadoop platform as an infrastructure for distributed testing of iOS applications. 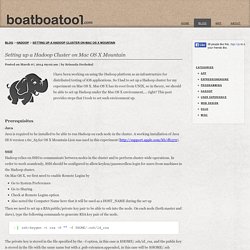 So I had to set up a Hadoop cluster for my experiment on Mac OS X. Mac OS X has its root from UNIX, so in theory, we should be able to set up Hadoop under the Mac OS X environment,... right? This post provides steps that I took to set such environment up. Prerequisites Java Java is required to be installed to be able to run Hadoop on each node in the cluster. Hadoop relies on SSH to communicate between nodes in the cluster and to perform cluster-wide operations. On Mac OS X, we first need to enable Remote Logins by Go to System PreferencesGo to SharingCheck at Remote Logins optionAlso noted the Computer Name here that it will be used as a HOST_NAME during the set up. Running Hadoop On Ubuntu Linux (Single-Node Cluster)

In this tutorial I will describe the required steps for setting up a pseudo-distributed, single-node Hadoop cluster backed by the Hadoop Distributed File System, running on Ubuntu Linux. 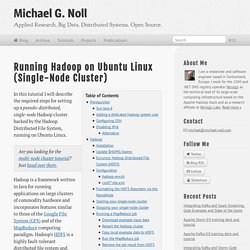 Hadoop is a framework written in Java for running applications on large clusters of commodity hardware and incorporates features similar to those of the Google File System (GFS) and of the MapReduce computing paradigm. Hadoop’s HDFS is a highly fault-tolerant distributed file system and, like Hadoop in general, designed to be deployed on low-cost hardware. It provides high throughput access to application data and is suitable for applications that have large data sets. The main goal of this tutorial is to get a simple Hadoop installation up and running so that you can play around with the software and learn more about it. 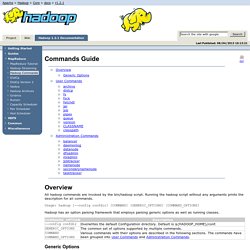 Running the hadoop script without any arguments prints the description for all commands. How to Install Java 7 (Jdk 7u75) on CentOS/RHEL 7/6/5. Install single node Hadoop on CentOS 7 in 5 simple steps. First install CentOS 7 (minimal) (CentOS-7.0-1406-x86_64-DVD.iso) I have download the CentOS 7 ISO here ### Vagrant Box You can use my vagrant box voor a default CentOS 7, if you are using virtual box ### Be aware that you add the hostname “centos7″ in the /etc/hosts. 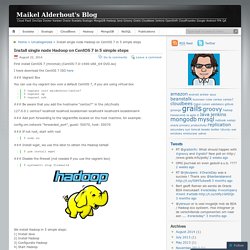 Install single node Hadoop on CentOS 7 in 5 simple steps. How to create a hadoop user on PHD cluster ? – All Help & Support. While starting up with PHD, often administrators create users to allow them access HDFS and execute application. 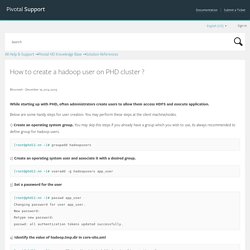 Below are some handy steps for user creation. You may perform these steps at the client machine/nodes. 1) Create an operating system group. Installing Hadoop on a single node – Part 2. In the last post, we saw the setup till updating .bashrc and .bash_profile files as required. 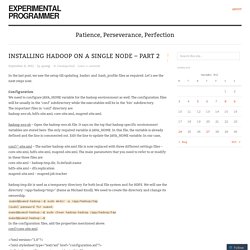 Let’s see the next steps now. Configuration We need to configure JAVA_HOME variable for the hadoop environment as well. The configuration files will be usually in the ‘conf’ subdirectory while the executables will be in the ‘bin’ subdirectory. What is best way to start and stop hadoop ecosystem? 29. Working with NoSQL technologies. 29. 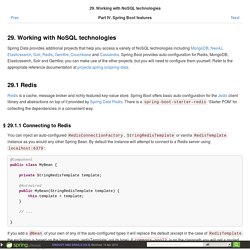 Working with NoSQL technologies Spring Data provides additional projects that help you access a variety of NoSQL technologies including MongoDB, Neo4J, Elasticsearch, Solr, Redis, Gemfire, Couchbase and Cassandra. Spring Boot provides auto-configuration for Redis, MongoDB, Elasticsearch, Solr and Gemfire; you can make use of the other projects, but you will need to configure them yourself. Eclipse Setup for Hadoop Development - OrzotaOrzota. Objectives We will learn the following things with this Eclipse Setup for Hadoop tutorial Setting Up the Eclipse plugin for HadoopTesting the running of Hadoop MapReduce jobs Prerequisites The following are the prerequisites for Eclipse setup for Hadoop program development using MapReduce and further extensions. 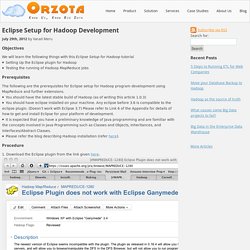 You should have the latest stable build of Hadoop (as of writing this article 1.0.3)You should have eclipse installed on your machine. Configure Eclipse for Hadoop Contributions. Contributing to Apache Hadoop or writing custom pluggable modules requires modifying Hadoop’s source code. 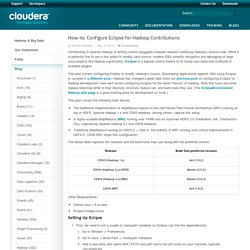 While it is perfectly fine to use a text editor to modify Java source, modern IDEs simplify navigation and debugging of large Java projects like Hadoop significantly. Eclipse is a popular choice thanks to its broad user base and multitude of available plugins. Hadoop Tutorial. Introduction Hadoop is an open source implementation of the MapReduce platform and distributed file system, written in Java. 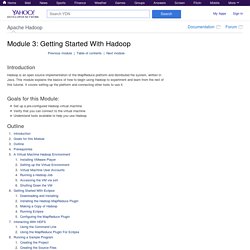 This module explains the basics of how to begin using Hadoop to experiment and learn from the rest of this tutorial. It covers setting up the platform and connecting other tools to use it. IntelliJ Project for Building Hadoop – The Definitive Guide Examples. I have been studying Hadoop – The Definitive Guide by Tom White and started building the sample applications with the Makefile I discussed in my last blog. Although the Makefile approach works, I decided to try using the IntelliJ Community Edition IDE to build the examples in any given chapter all at once. This time around I’ll walk you through a procedure to create an IntelliJ project for building Hadoop applications. Install IntelliJ If you don’t have it already, you can get the latest version of IntelliJ Community Edition here. Select the package for your operating system of choice, either Mac OS or Linux, then install IntelliJ by placing the package contents in your directory of choice.

Step 1: Creating a designated hadoop user on your system This isn't -entirely- necessary, but it's a good idea for security reasons. To add a user, go to: System Preferences > Accounts Click the "+" button near the bottom of the account list. You may need to unlock this ability by hitting the lock icon at the bottom corner and entering the admin username and password. When the New account window comes out enter a name, as short name and a password. Name: hadoop Short name: Hadoop Password: MyPassword (well you get the idea) Once you are done, hit "create account". Step 2: Install/Configure Preliminary Software Before installing Hadoop, there are a couple things that you need make sure you have on your system.

Java, and the latest version of the JDK SSH Because OS X is awesome, you actually don't have to install these things. Updating Java Open up the Terminal application. Applications > Utilities > Terminal Next check to see the version of Java that's currently available on the system: Onto ssh! Running_Hadoop_On_OS_X_10.5_64-bit_(Single-Node_Cluster) Apache ZooKeeper - Home. HBase – Apache HBase Home.