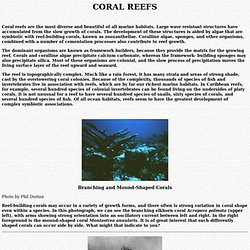 Large wave resistant structures have accumulated from the slow growth of corals. The development of these structures is aided by algae that are symbiotic with reef-building corals, known as zooxanthellae. Coralline algae, sponges, and other organisms, combined with a number of cementation processes also contribute to reef growth. The dominant organisms are known as framework builders, because they provide the matrix for the growing reef. Corals and coralline algae precipitate calcium carbonate, whereas the framework- building sponges may also precipitate silica. The reef is topographically complex. Branching and Mound-Shaped Corals Photo by Phil Dustan Reef-building corals may occur in a variety of growth forms, and there often is strong variation in coral shape even within a species.

Intraspecific Variation in Growth Form Here is an intraspecific example of variation in growth. Plate-like Growth of Agaricia sp. Atoll. Coral Reef Photo. Saltwater Animal & Plant Adaptations. Animal Adaptations There are 120 species of mammals including whales, dolphins, porpoises, seals and sea lions which have evolved to adapt to their aquatic environment by developing small appendages (ears and flippers), a generally large size, hydrodynamic (mechanical properties of liquid) body shapes and different methods to cope with extreme changes in temperature. 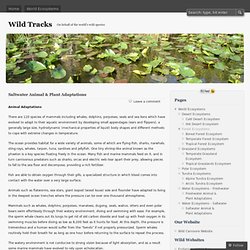 The ocean provides habitat for a wide variety of animals, some of which are flying-fish, sharks, narwhals, sting-rays, whales, tarpon, tuna, sardines and jellyfish. One tiny shrimp-like animal known as the phaeton is a key species floating freely in the ocean. Many fish and marine mammals feed on it, and in turn carnivorous predators such as sharks, orcas and electric eels tear apart their prey, allowing pieces to fall to the sea floor and decompose, providing a rich fertilizer. Plankton converts inorganic carbon into sugars that are stored in its cells. Bird Adaptations Ducks have developed webbed feet for swimming. Info About Animals In Saltwater. Blue Whale. What is seaweed? Some seaweeds are microscopic, such as the phytoplankton that live suspended in the water column and provide the base for most marine food chains. 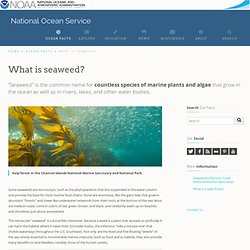 Some are enormous, like the giant kelp that grow in abundant “forests” and tower like underwater redwoods from their roots at the bottom of the sea. Most are medium-sized, come in colors of red, green, brown, and black, and randomly wash up on beaches and shorelines just about everywhere. The vernacular “seaweed” is a bona-fide misnomer, because a weed is a plant that spreads so profusely it can harm the habitat where it takes hold.

(Consider kudzu, the infamous “mile-a-minute vine” that chokes waterways throughout the U.S. Southeast). Information on marine macroalgae. Algae. Phytoplankton. What are Phytoplankton? : Feature Articles. By Rebecca Lindsey and Michon Scott Design by Robert Simmon July 13, 2010 A previous version of this article was published in 1999. 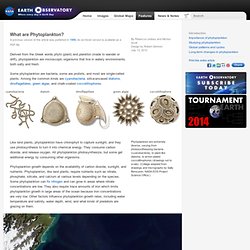 An archived version is available as a PDF file. Derived from the Greek words phyto (plant) and plankton (made to wander or drift), phytoplankton are microscopic organisms that live in watery environments, both salty and fresh. Sandy Shore Info. Weather. ROCKY SHORES. Cape Point, South Africa The rocky intertidal habitat has a very rich diversity of organisms especially in temperate climates. 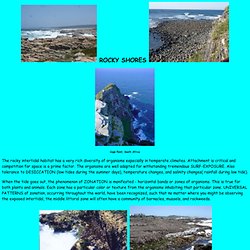 Attachment is critical and competition for space is a prime factor. The organisms are well adapted for withstanding tremendous SURF-EXPOSURE. Also tolerance to DESICCATION (low tides during the summer days), temperature changes, and salinity changes( rainfall during low tide). When the tide goes out, the phenomenon of ZONATION is manifested - horizontal bands or zones of organisms. The nature of the rock between the tide marks may exert a certain selective influence on the organisms that attempt to colonize it, in the sense that some rocks are more susceptible to the activities of boring organisms and others are not and certain minor variations in zonation may also be attributed to it.