MIT Students Create A Brick That Could End Pollution From Dirty Brick Kilns. India's brick industry, spread out over 100,000 kilns and producing up to 2 billion bricks a year, is a big source of pollution. 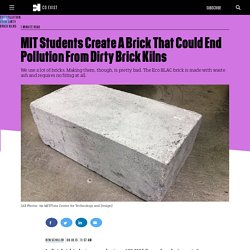 To fire to hot temperatures, the kilns use huge amounts of coal and diesel, and the residue is horrendous: thick particulate matter, poor working conditions, and lots of climate-changing emissions. MIT students have created an alternative. The Eco BLAC brick requires no firing at all and makes use of waste boiler ash that otherwise clogs up landfills. "Clay bricks are fired to 1,000 degrees Celsius," says Michael Laracy, a graduate student who's worked on the project. "They consume a tremendous amount of energy from coal and there's also the issue that these bricks are made completely of topsoil, so they're depleting the amount of farmable land [the Indians] have. " This Zero-Energy Building Uses Algae for Power and Shade. In a little over a month, a new German building will be the first in the world to have a "bioreactor facade" that can create energy, provide shade, and control light. 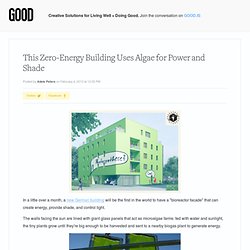 The walls facing the sun are lined with giant glass panels that act as microalgae farms: fed with water and sunlight, the tiny plants grow until they're big enough to be harvested and sent to a nearby biogas plant to generate energy. The glass panels are also designed to capture the warmth of the sun to heat the building and provide hot water. Excess heat can even be stored in the ground as geothermal energy. Since the algae grows fastest in the summer when the days are long and there's more sunlight, it can double as shade to help keep the building cool. It also helps insulate the building throughout the year. This Mexico City Building Eats Smog For Lunch. There are plenty of architects these days who are doing their best to design buildings that are energy efficient and utilize green technology. 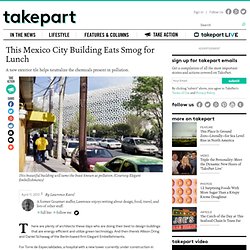 And then there’s Allison Dring and Daniel Schwaag of the Berlin-based firm Elegant Embellishments. For Torre de Especialidades, a hospital with a new tower currently under construction in Mexico City, the duo has developed a tile called proSolve370e, which will cover the façade of the building. The tile’s shape and chemical coating will help neutralize the chemicals present in the city’s smog. Yes, that’s right, this building will literally eat pollution. Campaign for Good Urban Governance. The Inclusive City. 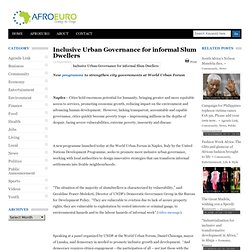 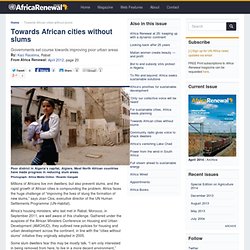 Most North African countries have made progress in reducing slum areas. Photograph: Africa Media Online / Ricardo Gangale Millions of Africans live inm dwellers, but also preventi slums, and the rapid growth of African cities is compounding the problem. What is universal basic income, and how could it lift millions out of poverty? The idea of a basic income for every person has been regularly popping up around the world in recent years. 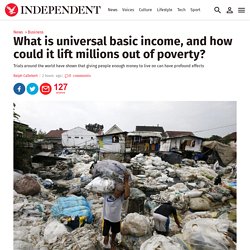 The latest place is the Canadian province of Ontario. It has announced plans to test the concept and, if the trials are successful, could soon find itself sending a monthly cheque to its residents. Economists, think tanks, activists and politicians from different stripes have long toyed with the idea of governments giving every citizen or resident a minimum income off which to live. Sustainable Design. Notice: Undefined offset: 1 in nice_menus_block_view() (line 243 of /home/content/61/9302761/html/sites/all/modules/nice_menus/nice_menus.module). 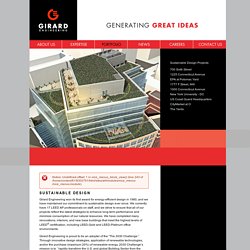 Girard Engineering won its first award for energy-efficient design in 1980, and we have maintained our commitment to sustainable design ever since. We currently have 17 LEED AP professionals on staff, and we strive to ensure that all of our projects reflect the latest strategies to enhance long-term performance and minimize consumption of our natural resources. We have completed many renovations, interiors, and new base buildings that meet the highest levels of LEED® certification, including LEED-Gold and LEED-Platinum office environments.

Girard Engineering is proud to be an adopter of the “The 2030 Challenge.” Bill Gates is turning sewage sludge into safe drinking water. Unsafe drinking water is arguably one of the world’s biggest problems, with over two and a half billion people still living without access to one of the most basic of resources. 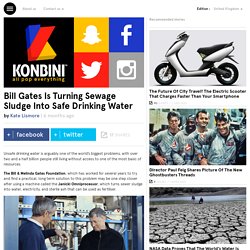 The Bill & Melinda Gates Foundation, which has worked for several years to try and find a practical, long term solution to this problem may be one step closer after using a machine called the Janicki Omniprocessor, which turns sewer sludge into water, electricity, and sterile ash that can be used as fertiliser. If it’s good enough for Bill Gates… GIF via The Verge. UN Women – Field Office ESEAsia. Three-day consultation discusses good practices, tools and policies to make cities safer for women and girls Date: 12 June 2015 New Delhi - “Smart cities have to be safe for women and girls, and must reduce inequalities between women and men,” Union Minister for Urban Development M. 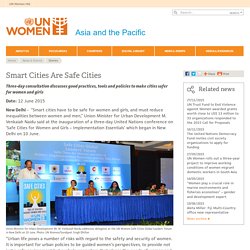 Venkaiah Naidu said at the inauguration of a three-day United Nations conference on ‘Safe Cities for Women and Girls – Implementation Essentials’ which began in New Delhi on 10 June. Union Minister for Urban Development Mr. How to Design a City for Women. In 1999, officials in Vienna, Austria, asked residents of the city's ninth district how often and why they used public transportation. 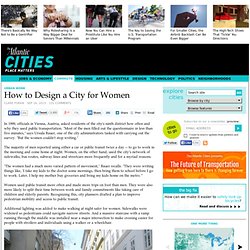 "Most of the men filled out the questionnaire in less than five minutes," says Ursula Bauer, one of the city administrators tasked with carrying out the survey. "But the women couldn't stop writing. " The majority of men reported using either a car or public transit twice a day -- to go to work in the morning and come home at night. Women, on the other hand, used the city’s network of sidewalks, bus routes, subway lines and streetcars more frequently and for a myriad reasons. "The women had a much more varied pattern of movement," Bauer recalls.