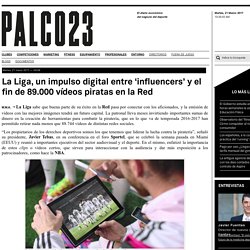 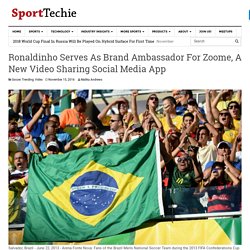 “I got involved because I liked the product,” Ronaldinho said through a translator at Web Summit last week. “I think it is very interesting for me to get involved and get closer to my fans from all continents through this technology and through the videos that we are going to broadcast.” With the app, which is available for iPad, iPhone and iPod touch, users who subscribe with the Personal TV level of Zoome can interact with friends, subscribe to other Zoome channels, create their own channels and share content. Premium subscribers have the ability to skip ads, have more video storage space, upload larger videos and be an agent to sell advertising campaigns. Get The Latest Sports Tech News In Your Inbox! Europe's elite clubs including Barcelona, Man City, Liverpool, Arsenal, Chelsea and Bayern Munich join forces on new website 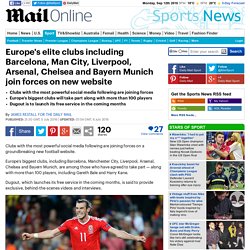 Europe’s biggest clubs, including Barcelona, Manchester City, Liverpool, Arsenal, Chelsea and Bayern Munich, are among those who have agreed to take part — along with more than 100 players, including Gareth Bale and Harry Kane. Dugout, which launches its free service in the coming months, is said to provide exclusive, behind-the-scenes videos and interviews. Is China Taking Over European Football? The drive into European football clubs by wealthy Chinese investors continues. 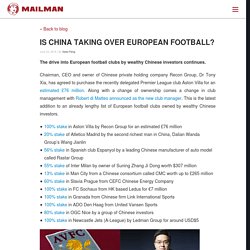 Chairman, CEO and owner of Chinese private holding company Recon Group, Dr Tony Xia, has agreed to purchase the recently delegated Premier League club Aston Villa for an estimated £76 million. Great haul of China is changing European football and up to 30 more billionaires are looking to invest in clubs. A Portrait of the U.S. Paralympic Soccer Team - The Atlantic. "One Nation. One Team. 14 Stories." Video Series Unveiled Prior to Paralympics. How the smart stadium will transform the smart city. What’s the difference between a monster truck rally and a Taylor Swift concert? 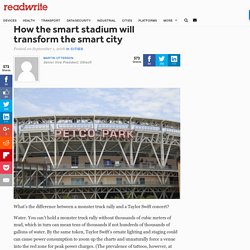 Water. You can’t hold a monster truck rally without thousands of cubic meters of mud, which in turn can mean tens of thousands if not hundreds of thousands of gallons of water. By the same token, Taylor Swift’s ornate lighting and staging could can cause power consumption to zoom up the charts and unnaturally force a venue into the red zone for peak power charges. (The prevalence of tattoos, however, at both events is probably about even.) The ability to charge accurate “bill backs” to promoters rather than just somewhat arbitrary flat fee are one of the many drivers of the smart stadium, i.e. venues wired with predictive analytics and sensors to fine-tune costs, consumption and even the fan experience.

See also: 5 key technologies of a smart city. The LA Galaxy Are Focused On Telling Player Stories With Virtual Reality. LOS ANGELES – The first few moments in the VR headset are filled with coastal views and seaside streets. 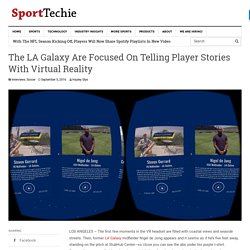 Then, former LA Galaxy midfielder Nigel de Jong appears and it seems as if he’s five feet away, standing on the pitch at StubHub Center–so close you can see the abs under his purple t-shirt. Surrounding you on all sides elsewhere, a bright Los Angeles day and sunbathed grandstands. That’s the view from a Laduma headset loaded with Galaxy content. Pixellot Provides Cheap, Easy Broadcast Options For Amateur Teams. Everybody has that one awful home video of them playing a sport that they should have never played in the first place. 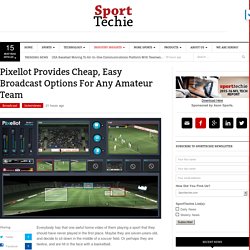 Maybe they are seven-years-old, and decide to sit down in the middle of a soccer field. Or perhaps they are twelve, and are hit in the face with a basketball. Thankfully, for those who can relate, a parent or someone in the crowd has usually shot the home videos shakily and poorly. However, the next generation of amateur athlete might not get that same treatment, if Israeli technology and services company Pixellot has their say. “We see ourselves covering the uncovered world of amateur sports, college sports, corporate leagues and semi-pro sports, offering an affordable option to cover all of these events that haven’t been covered or covered in a quality manner,” said CEO of Pixellot, Alon Werber.

Coach's Eye Instantly Analyzes Athlete Videos On A Mobile Device. Images courtesy of Coach's Eye When Coach’s Eye first started in 2011, it adopted the role of somewhat of a great equalizer. 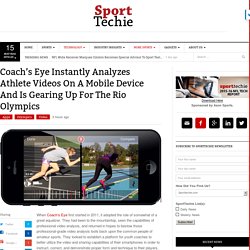 They had been to the mountaintop, seen the capabilities of professional video analysis, and returned in hopes to bestow those professional-grade video analysis tools back upon the common people of amateur sports. The competitive advantages of data analytics. How video analysis helps the New York Red Bulls hone the high press. When Aurelien Collin arrived at the New York Red Bulls training facility in Hanover, New Jersey, last week after a trade brought him north from Orlando City SC, the first thing he did was take a seat in a dark room. 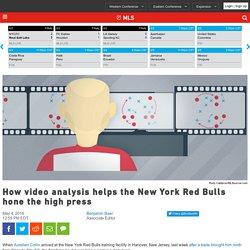 Jesse Marsch joined his new center back and fired up the projector. On the screen, the Red Bulls’ head coach ran the 30-year-old Frenchman through play after play. This was what would be expected from him. This would be his role – defined one clip at a time. YouTube Top 100 Most Viewed Sports Video Producers. El 'freestyler' John Farnworth desplega su mágia ante las obras de '1 in 11' Términos y condiciones. 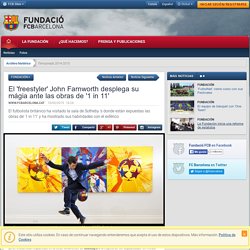 Manchester City Take Football To Virtual Reality. Tue 10th May 2016 | IT & Technology Manchester City FC, Sky Sports and LiveLike have teamed up to allow fans to experience live Premier League matches in virtual reality (VR) for the very first time. The new immersive VR experience was trialled with a select group of Manchester City fans in London, New York and Melbourne who were tuning in to watch Manchester City go head-to-head with Arsenal at the Etihad Stadium on 8 May. Fans participating in the test wore VR headsets which placed them right in the heart of all the action on the pitch.

This innovative offering, delivered in collaboration with VR start-up LiveLike and supported by the Premier League, Sky Sports, US broadcaster NBC and Australian broadcaster Fox Sports, marks another step in Manchester City’s journey of early experimentation with new technologies that provide fans with unique points of view on the club, the players and the matches. Leicester City FC’s digital evolution. West Ham's Latest Player Transaction Was A Professional FIFA Player. The English Premier League’s West Ham United signed a player this week that does not lace up cleats or run out on a pitch. He uses a controller instead of his feet, and his pitch is on a screen.

Leicester City: The Biggest Underdog Story In Sports History And Their Explosive Social Media Growth. Leicester City has done the completely improbable and won the Barclay’s Premier League for the first time in club history, despite the reported 5000-1 odds stacked against them at the onset of this season. So with this Cinderella success, how did the club’s social media influence improve over the season? We asked social media measurement and valuation platform MVPindex to find out how the club and their star striker Jamie Vardy have grown their audience and engagement during their championship season.

It will be easier than ever to watch Major League Soccer games from East Asia, as the league announced on Thursday new and expanded television agreements in the region. MLS has expanded its partnership with China's Le Sports from live streams across digital platforms to include televised live games in mainland China. In addition, MLS also has a new partnership with Japan's Fuji TV to televise regular season matches. The Le Sports and MLS digital partnership, announced in 2015, has been expanded to a television deal to include multiple live MLS regular season matches per week, the AT&T MLS All-Star Game, games from the Audi 2016 MLS Cup Playoffs and MLS Cup.

In addition, Le Sports will continue to carry highlights, player features and other MLS content across its digital platforms. “As we continue to expand the league’s global reach, China is a priority market for our growth. Mr. Alex Morgan Broadcast Her Team's Last Game Via Facebook Live. This past weekend US Women’s soccer superstar, Alex Morgan, and her social team used the Facebook Live API to broadcast the home opener of her club, the Orlando Pride.