The new meaning of new media - Columbia Journalism Review. In Miami, Philadelphia, and elsewhere, entrepreneurs are luring young readers with newsletters and parties Photos by Devin Christopher It is because local journalism needs reinvention that, not long ago, an opera singer stood at the front of a carpeted, fluorescent-lit conference room in a Miami office building belting out a bit of Rigoletto. 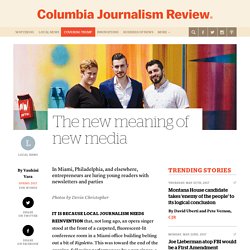 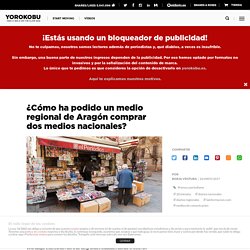 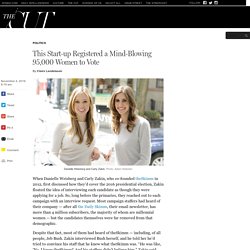 So, long before the primaries, they reached out to each campaign with an interview request. Most campaign staffers had heard of their company — after all the Daily Skimm, their email newsletter, has more than 4 million subscribers, the majority of whom are millennial women — but the candidates themselves were far removed from that demographic. Despite that fact, most of them had heard of theSkimm — including, of all people, Jeb Bush. With its new redesign, HuffPost wants to become a working-class digital tabloid (and make its splashy headlines go viral) – Poynter. The Huffington Post shed its old look and several syllables this morning as it unveiled a new redesign and changed its name to HuffPost. 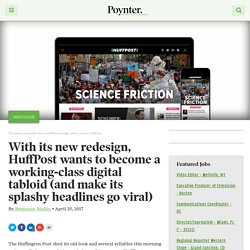 It's the first total overhaul in the website's nearly 12-year history and marks a refocusing of HuffPost's editorial vision under its new-ish Editor-in-Chief, Lydia Polgreen. "We’re doubling down on our bold, splashy style, and serving up the news with a sense of humor, outrage and empathy," Polgreen wrote in an editor's note announcing the redesign. Polgreen, a New York Times alumna and longtime foreign correspondent, succeeded founder Arianna Huffington at the end of last year. Log In - New York Times. Buscando el amor en internet - Grandes Medios. Uk.businessinsider. Turner CEO John Martin.Slaven Vlasic/Getty Images Digital ad spending in the US was forecast to overtake spend on television commercials last year, but the CEO of Turner — which owns CNN, TBS, Cartoon Network, and Adult Swim — says TV is actually experiencing a resurgence. 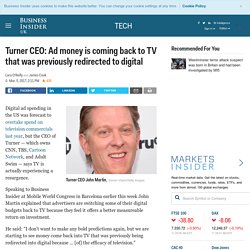 Speaking to Business Insider at Mobile World Congress in Barcelona earlier this week John Martin explained that advertisers are switching some of their digital budgets back to TV because they feel it offers a better measureable return on investment. How The New York Times, CNN, and The Huffington Post approach publishing on platforms. Publishing used to be relatively simple. 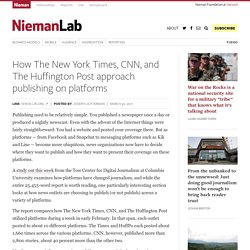 You published a newspaper once a day or produced a nightly newscast. Even with the advent of the Internet things were fairly straightforward: You had a website and posted your coverage there. The Platform Press: How Silicon Valley reengineered journalism. The influence of social media platforms and technology companies is having a greater effect on American journalism than even the shift from print to digital. 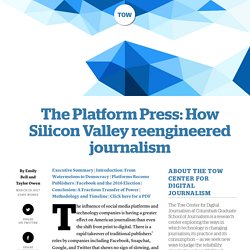 There is a rapid takeover of traditional publishers’ roles by companies including Facebook, Snapchat, Google, and Twitter that shows no sign of slowing, and which raises serious questions over how the costs of journalism will be supported. These companies have evolved beyond their role as distribution channels, and now control what audiences see and who gets paid for their attention, and even what format and type of journalism flourishes.

Publishers are continuing to push more of their journalism to third-party platforms despite no guarantee of consistent return on investment. The Future of Free Speech, Trolls, Anonymity and Fake News Online. Many experts fear uncivil and manipulative behaviors on the internet will persist – and may get worse. 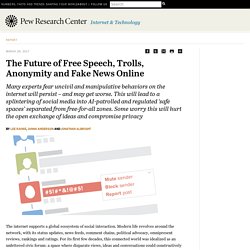 This will lead to a splintering of social media into AI-patrolled and regulated ‘safe spaces’ separated from free-for-all zones. Some worry this will hurt the open exchange of ideas and compromise privacy The internet supports a global ecosystem of social interaction. Modern life revolves around the network, with its status updates, news feeds, comment chains, political advocacy, omnipresent reviews, rankings and ratings. For its first few decades, this connected world was idealized as an unfettered civic forum: a space where disparate views, ideas and conversations could constructively converge. CNN: Billions of Online Video Views Means it's More Than Just a Cable News Network. 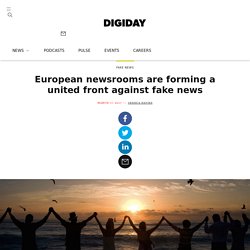 A total of 37 publishers are signed up to the project, spearheaded by non-profit First Draft News. Publisher partners are mainly from France and Britain, and include the BBC, Channel 4 News, International Business Times, Bloomberg, Le Monde, BuzzFeed, La Liberation, Les Echos and Agence France-Presse. Log In - New York Times. Why we click on news stories. Published Updated 03/14/17 11:37 am For news organizations, clicks are tracked closely. 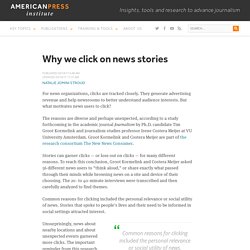 They generate advertising revenue and help newsrooms to better understand audience interests. But what motivates news users to click? The reasons are diverse and perhaps unexpected, according to a study forthcoming in the academic journal Journalism by Ph.D. candidate Tim Groot Kormelink and journalism studies professor Irene Costera Meijer at VU University Amsterdam. The global media landscape: in eight charts. Every year Ofcom, the UK communications regulator, publishes their International Communications Market Report. The report benchmarks the performance of UK communications sectors against different comparator countries. The most recent study – published without much aplomb at the end of last year - covered 18 different countries, exploring the take-up, usage and motivation behind different communication technologies. The 213-page report is full of data and insights.

How Facebook and Google could disrupt the subscription model for news. By Frederic Filloux By applying their technology to the publishers’ antiquated subscription systems, the two Internet giants could help create a sustainable news ecosystem. When you go online to book a plane ticket from San Francisco to New York, your search will typically turn up about 1.2 million flight combinations, each with a different price. Considering that 30,000 flights crisscross the United States every day, that means airlines offer a few hundred million different rates for the roughly one million passengers in the air at a given moment. Once you’re on board, though, the service you receive is basically identical to what the passenger sitting next to you gets. Your seatmate in row 34 might have paid 20 percent more (or less), but you’ll never know (unless you ask her).

That’s the power of dynamic pricing. January 2017 transfer window - All the deals. Action.share.whatsAppShare on TwitterShare on FacebookGoogle + The winter transfer window opened on 1 January 2017 and will close on 31 January at 11pm GMT, and premierleague.com will cover all the signings and sales made by the Premier League clubs across the month. See: Updated Premier League squad lists for 2016/17 released. Some tips for better podcast sound. Snappy answers to frequently asked questions: What do great interviews have in common? Your answer’s as good as mine. Probably better. Podcasting: En busca del 'Serial' que haga explotar el podcasting en español.

Log In. The divide between what most Americans see and what critics reward is not new or surprising. Yet it seems worth repeating that this gulf remains as vast and seemingly unbridgeable as the one that characterized the electorate. This is less about taste (or so-called elites versus Jill Popcorn) than the bottom line of today’s conglomerate cinema. As of early December, the six major studios have an 83.4 percent market share of the domestic box office. Disney alone enjoys a staggering 24.2 percent, a number that will increase with the release of “Rogue One: A Star Wars Story.”

Why is the attention movement worth paying attention to? - Content Insights. There are at least eight promising business models for email newsletters. When I began overhauling the Financial Times’ editorial email newsletters a couple of years ago, I was soon faced with positive reinforcement, technical frustrations, and sources of deep satisfaction. Log In. A sample ranking of the most-shared sites on Facebook from January had Breitbart at No. 14, just behind ABC and The Washington Post, but ahead of Bleacher Report, Comicbook.com, Yahoo and The Hill. The month before, the site ranked between the BBC and The Guardian, just behind The New York Times, which was at No. 7.

The NBA is Crushing Other Sports Brands on Social Video. What is WeChat? A guide for brands and publishers.