This Is Maybe One Of The Most Awkward Moments Of All Time. How Original Are Your Thoughts. Do You Actually Remember How To Use A Nintendo Power Pad. 25 Things We Did Before Smartphones. 14 Affordable Gifts For The Movie Buff In Your Life. 21 Times Kevin From "The Office" Was A True Inspiration To Us All. Can You Name These Songs From The Sheet Music. Can You Name These Disney Movie Characters. What Do Your Fandom Allegiances Say About You. What Do Your Fandom Allegiances Say About You. 7 Recipes That Will Make You Feel Like A Sloth. How do you know? This Tumblr Meme About People Snatching Breadsticks On Dates Is Hilarious. Tell Us Your Cheekiest Nando's Experience.

The Toughest "Harry Potter" Quote Challenge You'll Ever Take. Which Sheldon Cooper T-Shirt Are You. 15 Celebrity Anagrams, Illustrated. Taylor Swift Told Patrick Stewart And Ian McKellen They Can Join Her Squad. This Girl Is Spot On Regarding The Current Economic Climate - 9GAG.tv. Rupert wants you to keep calm... 8 Reasons You Should Be Dating A Gamer. Texting dad... Celebrities who don't look their age. A big deal and a rare thing... The world would be much better... The 'Broquet'... Free, please take... This Bro Documented His Last Three Years Of Life Being A Third Wheel, Will Probably Get Laid A Ton Now. 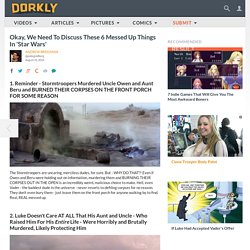 Reminder - Stormtroopers Murdered Uncle Owen and Aunt Beru and BURNED THEIR CORPSES ON THE FRONT PORCH FOR SOME REASON The Stormtroopers are uncaring, merciless dudes, for sure. But - WHY DO THAT?! Even if Owen and Beru were holding out on information, murdering them and BURNING THEIR CORPSES OUT IN THE OPEN is an incredibly weird, malicious choice to make. 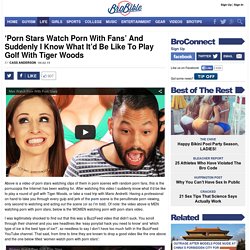 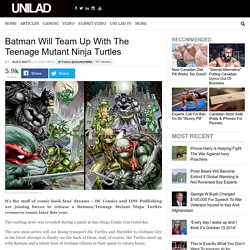 The exciting news was revealed during a panel at San Diego Comic Con yesterday. The new mini-series will see Krang transport the Turtles and Shredder to Gotham City in his latest attempt to finally see the back of them. And, of course, the Turtles meet up with Batman and a whole host of Gotham villains in their quest to return home. The new series will be written by James Tynion IV (Batman Eternal) and drawn by Freddie E. 19 Brilliant Parent-Invented Products To Make Your Life Easier. Guys Explain What Makes Girls Good In Bed. Guys Answer Boner Questions Girls Are Too Afraid To Ask. Men Answer Relationship Questions Women Are Too Afraid To Ask. Jesus Cristo lança o caos no GTA V... VIDEO. Guy Friends Recreate 100-Year-Old Bromance Photos.

Women Say What They Secretly Think About Beards. People Planning On Moving To Canada Because Of The Supreme Court Decision. R2-Tea2... Worrying. Taylor Swift Gets Stuck On Stage, Plays It Off As Cool As Someone Worth $200 Million Possibly Can. Hailing from the great city of Nashville, I get pretty fucking pissed off when I hear people talk shit about my home girl Taylor Swift. 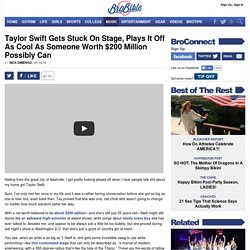 Sure, I’ve only met her once in my life and it was a rather boring conversation before she got as big as she is now, but, even back then, Tay proved that she was one, rad chick who wasn’t going to change no matter how much stardom came her way. With a net worth believed to be about $200 million—and she’s still just 25 years old—Swift might still dance like an awkward high-schooler at award shows, write songs about nearly every boy she has ever talked to, besides me, and appear to be always just a little bit too bubbly, but she proved during last night’s show in Washington D.C. that she’s just a good ol’ country girl at heart. In Layman’s terms, the thing is a fucking masterpiece, probably tested thousands of times to make sure everything runs smoothly. 19 Totally Random Etsy Finds You'll Probably Drunk Buy. Paul Rudd's Honest Opinions On 14 Random Things. 22 Times You'll Die During Taylor Swift's 1989 World Tour. Kids Dressed Like Cows For A Free Chicken Sandwich And The Results Are Adorable - BuzzFeed News. 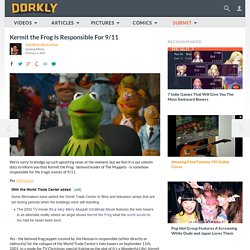 Per Wikipedia: Yes - the beloved frog puppet created by Jim Henson is responsible (either directly or indirectly) for the collapse of the World Trade Center's twin towers on September 11th, 2001. 20 Things Everyone With a Cellphone Knows to Be True. The Ultimate Guide To Dominating A Date. 23 Of The Greatest Things That Happened At San Diego Comic-Con This Year. 24 Pictures Literally Everyone Will Instantly Understand. 24 Pictures Literally Everyone Will Instantly Understand. 30 Tips For Coping With A Migraine Hangover. These Simple Canadian Cards Are So, So, So, So, So, So Cute. 8 Times SDCC Restored My Faith In Fandom. The First Chapter Of "Go Set A Watchman" Will Break Your Heart.

Marvel superheroes would be a lot more adorable if they were dogs. Minnesota-based illustrator Josh Lynch has come up with a fun series that imagines what it would be like if The Avengers – or should I say, ARFvengers – were dogs. 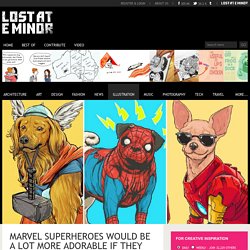 In his series ‘DOTMU: Dogs of the Marvel Universe’, he turns Earth’s mightiest heroes (and villains) into Earth’s most adorable pets. It includes a Chihuahua as Iron Man, a Dachshund as Mr. Fantastic, and a Golden Retriever as Thor. We’re not yet sure if a movie is in store for these guys, but rumours are that they’ll be up against their greatest foe: The Mail Man. Head on over to Lynch’s Behance page to see the rest of the series. Via UFunk. 21 Ways Australian Food Bloggers Are Making The Most Of Winter Fruits. 11 Foods That Need To Slim Down Like The Oreo. 13 Unique Grill Recipes To Make This Summer. 28 Horrifying Gaming Moments That Ruined Your Childhood. Which Totally Weird Forever 21 Slogan T-Shirt Are You.