As Detroit breaks down, scourge of arson burns out of control. Detroit must stop arson epidemic. A landscape of burned-out homes is a Detroit trademark. 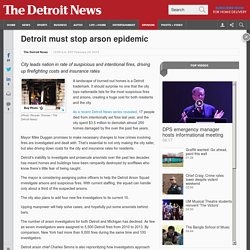 It should surprise no one that the city tops nationwide lists for the most suspicious fires and arsons, creating a huge cost for both residents and the city. As a recent Detroit News series revealed, 17 people died from intentionally set fires last year, and the city spent $3.5 million to demolish almost 250 homes damaged by fire over the past five years. Mayor Mike Duggan promises to make necessary changes to how crimes involving fires are investigated and dealt with.

That’s essential to not only making the city safer, but also driving down costs for the city and insurance rates for residents. Detroit’s inability to investigate and prosecute arsonists over the past two decades has meant homes and buildings have been rampantly destroyed by scofflaws who know there’s little fear of being caught. Detroit cop unions push NFL to rescind ban on police handguns at Ford Field. Detroit — In the wake of recent terrorist attacks in Paris, Detroit police union officials are expressing their opposition to an NFL policy that prohibits off-duty cops from bringing firearms into stadiums, saying the rule puts lives in danger. 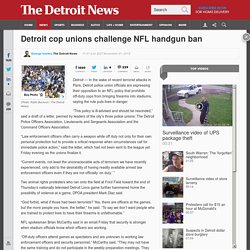 “This policy is ill-advised and should be rescinded,” said a draft of a letter, penned by leaders of the city’s three police unions: The Detroit Police Officers Association, Lieutenants and Sergeants Association and the Command Officers Association. “Law enforcement officers often carry a weapon while off duty not only for their own personal protection but to provide a critical response when circumstances call for immediate police action,” said the letter, which had not been sent to the league yet Friday evening as the unions finalize it.

“God forbid, what if those had been terrorists? Yes, there are officers at the games, but the more people you have, the better,” he said. The NFL enacted the firearms ban in October 2013. ghunter@detroitnews.com. Casinos, not cars, are keeping Detroit afloat - Jul. 19, 2013. It's the city's three casinos that are now crucial to keeping the cash-strapped government functioning during bankruptcy. 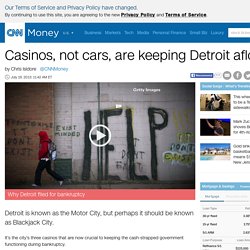 Most of the auto industry's Michigan plants are outside of city limits, severely limiting how much tax revenue they contribute to Detroit. General Motors (GM) is the only automaker with headquarters inside of city limits, and Chrysler Group operates just one plant inside the city. Source: Governor to recommend emergency manager for Detroit. Michigan Gov. 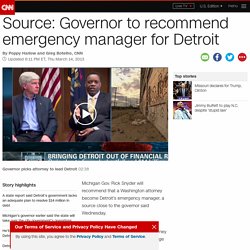 Rick Snyder will recommend that a Washington attorney become Detroit's emergency manager, a source close to the governor said Wednesday. At 2 p.m. Thursday, the governor is expected to publicly recommend attorney Kevyn Orr step in to help Detroit manage its challenging financial situation, the source said. Members of Michigan's Local Emergency Financial Assistance Loan Board would make the official appointment. The governor said earlier this month that Detroit lacked an adequate plan to resolve its $14 billion debt and that he would invoke a state law to appoint a manager to assume control of the city's government. Detroit's City Council voted days later to challenge the move. "We need to end the drama and infighting and understand that, whether we like it or not, an emergency financial manager is coming to Detroit," Bing said in a statement.

"Otherwise, it will be a more elongated and painful process," Bing said. "I don't view it as a takeover," the governor told CNN. Detroit Looks to Re-Engineer How City Government Works. Flint holds onto dubious title of arson capital of the nation, despite downturn in fires. File photoMatt Dixon | The Flint Journal FLINT, MI -- A downturn in the number of intentionally set fires last year was not enough for the city to relinquish its title of "arson capital" of the nation.FBI statistics show Flint had 287 arsons in 2011, putting the city nearly 100 fires per capita ahead of the second place city, Toledo, Ohio. 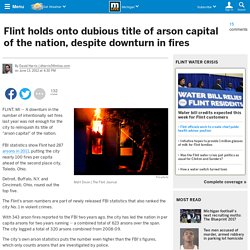 Detroit, Buffalo, N.Y. and Cincinnati, Ohio, round out the top five. The Flint's arson numbers are part of newly released FBI statistics that also ranked the city No. 1 in violent crimes. Explicit cookie consent. A COUPLE of years ago, the gonzo television journalist Charlie LeDuff wanted to show people how impotent the police department of Detroit, a city then spiralling into bankruptcy and dysfunction, had become. 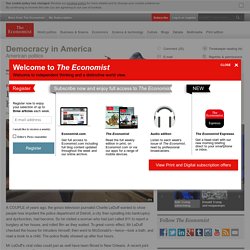 So he visited a woman who had just called 911 to report a burglary at her house, and rolled film as they waited. To great comic effect, Mr LeDuff checked the house for intruders himself, then went to McDonald’s—twice—took a bath, and read a book to a child. The police finally showed up after four hours. Mr LeDuff’s viral video could just as well have been filmed in New Orleans. A recent joint investigation by The New Orleans Advocate and WWL-TV found that New Orleans police have taken an average of 79 minutes to respond to 911 calls so far this year. With its persistent violent-crime problem, there are plenty of genuine emergencies to worry about in New Orleans.

Other stories are scarier, if less widely known. Lindsay Nichols was even unluckier. Detroit could leave state's financial oversight by 2017.