Fabrication, modeling and optimization of an ionic polymer gel actuator - Abstract - Smart Materials and Structures. The modeling of the electro-active behavior of ionic polymer gel is studied and the optimum conditions that maximize the deflection of the gel are investigated. 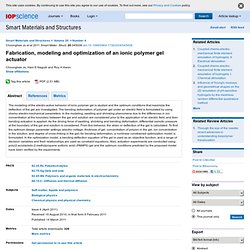 The bending deformation of polymer gel under an electric field is formulated by using chemo-electro-mechanical parameters. In the modeling, swelling and shrinking phenomena due to the differences in ion concentration at the boundary between the gel and solution are considered prior to the application of an electric field, and then bending actuation is applied. Untitled Document. Background Artificial muscles are made from electroactive polymers (EAPs), which are simple, lightweight strips of highly flexible plastic. 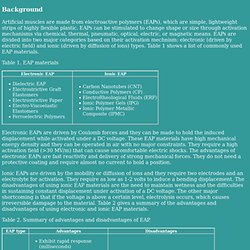 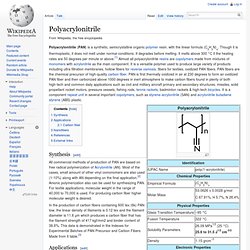 Though it is thermoplastic, it does not melt under normal conditions. It degrades before melting. It melts above 300 °C if the heating rates are 50 degrees per minute or above.[1] Almost all polyacrylonitrile resins are copolymers made from mixtures of monomers with acrylonitrile as the main component. Electroactive Organic Compounds - Molecular Electronics: From Principles to Practice - Petty. KCF Technologies, Inc - Prosthetics and Electro-Mechanical Devices. Today’s advanced prosthetic limbs are operated with a microprocessor-controlled knee. 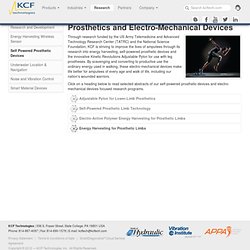 KCF Technologies has developed an energy-scavenging ankle component for the prosthetic that will self-charge the microprocessor’s batteries during walking, and thereby increase realization of the advantages of an advanced microprocessor-controlled lower-limb prosthetic. This technology is an attractive next-generation application for the energy-scavenging technology because of the need for self-charging batteries and the availability of spare energy from walking, running, and other human motion. The power harvesting device is designed to replace stiffness in the ankle, so there is no noticeable effect on the apparent stiffness, damping, or other dynamic behavior of the ankle or knee. Electroactive Polymers (EAP) as Artificial Muscles (EPAM) for Robot Applications. Having previously written about various artificial muscle technologies, I'd like to examine the electroactive polymer (EAP) variant in more detail. 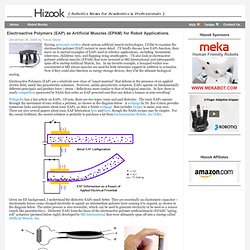 I'll briefly discuss how EAPs function, then move on to myriad examples of EAPs used in robotics applications, including: biomimetic robot eyes, childrens' toys, and flapping-wing ornithopters. I'll also look at electroactive polymer artificial muscles (EPAM) that were invented at SRI International and subsequently spun off to startup Artificial Muscle, Inc. In my favorite example, a hexapod walker was constructed at SRI whose muscles are used for both structural support in addition to actuation. Now if they could also function as energy storage devices, they'd be the ultimate biological analog. Blog Archive » Electroactive Polymer Technology Developed in Sweden Finds New Berth in Galway. February 13, 2009 – 2:16 am A couple years ago, while researching an article on biomaterials, I stumbled on intriguing information on a polymer that could swell and contract in response to a small electrical stimulus. 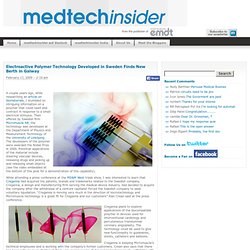 Then offered by Swedish firm Micromuscle AB, the technology was developed at the Department of Physics and Measurement Technology of the University of Linköping. The developers of the polymer were awarded the Nobel Prize in 2000. Potential applications of the material include steering vascular devices, releasing drugs and picking up and releasing small objects (see the video embedded at the bottom of this post for a demonstration of this capability).

While attending a press conference at the MD&M West trade show, I was interested to learn that Creganna had acquired the patents, brands and trademarks related to the Swedish company. Electro-active polymers. Ndeaa.jpl.nasa.gov/nasa-nde/lommas/eap/Polypyrrole-PrepProcedure.htm. J.M. 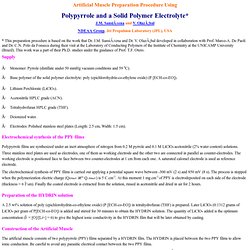 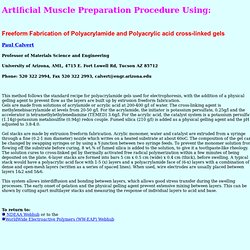 Fort Lowell Rd, Tucson AZ 85712 Phone: 520 322 2994, Fax 520 322 2993, calvert@engr.arizona.edu This method follows the standard recipe for polyacrylamide gels used for electrophoresis, with the addition of a physical gelling agent to prevent flow as the layers are built up by extrusion freeform fabrication. WW-EAP and Artificial Muscles - Books. ShapeShift. Review of Artificial Muscle based on Contractile Polymers.

A.I.Memo No. 1330 November, 1991 Abstract An artificial muscle with strength and speed equal to that of a human muscle may soon be possible. 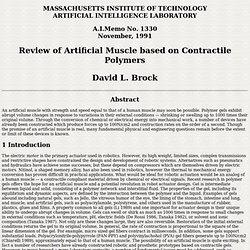 Polymer gels exhibit abrupt volume changes in response to variations in their external conditions --- shrinking or swelling up to 1000 times their original volume. Through the conversion of chemical or electrical energy into mechanical work, a number of devices have already been constructed which produce forces up to 100N/cm2 and contraction rates on the order of a second. Though the promise of an artificial muscle is real, many fundamental physical and engineering questions remain before the extent or limit of these devices is known. 1 Introduction. 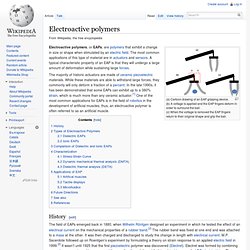 (b) A voltage is applied and the EAP fingers deform in order to surround the ball. (c) When the voltage is removed the EAP fingers return to their original shape and grip the ball. Electroactive polymers, or EAPs, are polymers that exhibit a change in size or shape when stimulated by an electric field. The most common applications of this type of material are in actuators and sensors. A typical characteristic property of an EAP is that they will undergo a large amount of deformation while sustaining large forces.

History[edit] The field of EAPs emerged back in 1880, when Wilhelm Röntgen designed an experiment in which he tested the effect of an electrical current on the mechanical properties of a rubber band.[2] The rubber band was fixed at one end and was attached to a mass at the other. Polymers that respond to environmental conditions other than an applied electrical current have also been a large part of this area of study. [edit]