Find the Right Immigration Lawyer for Your Case.

11 Views Guidy Mamann from Migrationlaw.com speaks about ‘Man with no name’ detainee that was deported from Published on February 21th, 2017 by migrationlawWatch this video and listen what Guidy Mamann, a specialist in Immigration law and senior partner at 35% Complete 35% Liked 65% Disliked 0 likes, 0 dislikes All Comments (0) Be the first to post comment on this video! 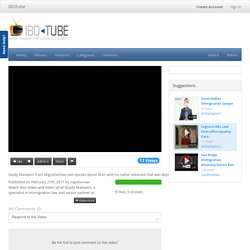 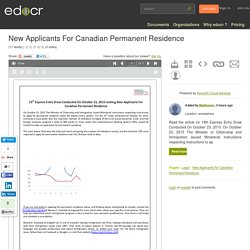 For the 19th draw conducted on October 23, 2015, instructions were given that the maximum number of Invitations to Apply (ITAs) to be issued would be 1,502, and that foreign nationals assigned a total of 489 points or more under the Comprehensive Ranking System (CRS), would be invited to make an application for permanent residence. The chart below illustrates the historical trend comparing the number of invitations issued, and the minimum CRS score required to apply for permanent residence over the 19 draws held to-date: Professional and Expert Immigration Advice.

Parent and Grandparent Program in Canada. Find Canada’s Leading Immigration Law Firms. Start Preparing Your Parent And Grandparent Sponsorship Application Now With The Help Of An Immigration Professional Thanksgiving has passed, and it seems that Christmas is almost right around the corner. 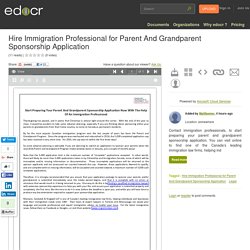 With the end of the year so close, it would be prudent to take some advance planning, especially if you are thinking about sponsoring either your parents or grandparents from their home country, to come to Canada as permanent residents. By far the most popular Canadian immigration program over the last couple of years has been the Parent and Grandparent Program. Since the program was overhauled and relaunched in 2014, the 5,000 completed application cap has been reached in very short time. For 2015, the cap was hit within the first three days! So some advance planning is advisable if you are planning to submit an application to sponsor your parents when the new 2016 Parent and Grandparent Program intake window opens in January, just a couple of months away! 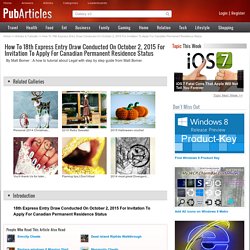 There were 1,530 invitations issued, for candidates with a minimum CRS score of 450 or more. The current score represents the lowest CRS score required to-date in order to receive an ITA, and is a continuation of the first time from the last draw in September.The chart below shows the historical trend overall from the last 18 draws, including this last one, broken down by number of ITAs issued and lowest accepted CRS scores: The Dangers Of Misrepresentation On Your Immigration Application. Lying or intentionally misleading immigration authorities when you come to Canada is a serious criminal offence, and punishable with fines or imprisonment. 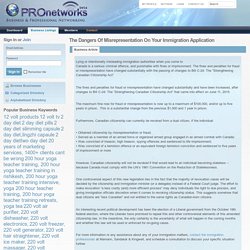 The maximum fine now for fraud or misrepresentation is now up to a maximum of $100,000, and/or up to five years in prison. This is a substantial change from the previous $1,000 and 1 year in prison. 19th Express Entry Draw Conducted On October 23, 2015 Inviting New Applicants For Canadian Permanent Residence. If you are interested in applying for permanent residence status, and thinking about immigrating to Canada, contact the immigration experts at Mamann, Sandaluk & Kingwell for more information about your specific circumstances. 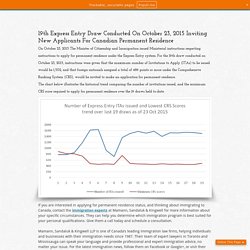 They can help you determine which immigration program is best suited for your personal qualifications. Give them a call today and schedule a consultation. Mamann, Sandaluk & Kingwell LLP is one of Canada’s leading immigration law firms, helping individuals and businesses with their immigration needs since 1987. Their team of expert lawyers in Toronto and Mississauga can speak your language and provide professional and expert immigration advice, no matter your issue. For the latest immigration news, follow them on Facebook or Google+, or visit their website (www.migrationlaw.com). About The Author: Matt Bomer is one of Canada’s leading Canadian and US immigration lawyer. Information On Lowest CRS Scores Trend Over The Last 17 Express Entry Draws By Migrationlaw.com. 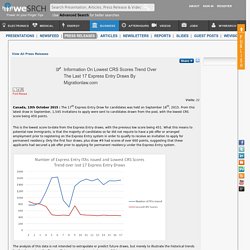 From this latest draw in September, 1,545 invitations to apply were sent to candidates drawn from the pool, with the lowest CRS score being 450 points. This is the lowest score to-date from the Express Entry draws, with the previous low score being 451. What this means to potential new immigrants, is that the majority of candidates so far did not require to have a job offer or arranged employment prior to registering on the Express Entry system in order to qualify to receive an invitation to apply for permanent residency. Only the first four draws, plus draw #9 had scores of over 600 points, suggesting that these applicants had secured a job offer prior to applying for permanent residency under the Express Entry system. 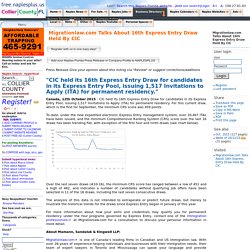 " Canada, 12th October 2015 : CIC held its 16th Express Entry Draw for candidates in its Express Entry Pool, issuing 1,517 Invitations to Apply (ITA) for permanent residency. For this current draw, which is the first for September, the minimum CRS score was 459 points. To-date, under the new expedited electronic Express Entry management system, over 20,467 ITAs have been issued, and the minimum Comprehensive Ranking System (CRS) score over the last 16 draws has been trending flat, with exception of the first four and ninth draws (see chart below): Over the last seven draws (#10-16), the minimum CRS score has ranged between a low of 451 and a high of 482, and indicates a number of candidates without qualifying job offers have been selected in 11 of the 16 draws, including the last seven consecutive draws. 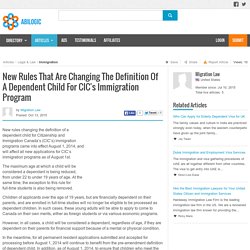 The maximum age at which a child will be considered a dependant is being reduced, from under 22 to under 19 years of age. At the same time, the exception to this rule for full-time students is also being removed. Children of applicants over the age of 19 years, but are financially dependent on their parents, and are enrolled in full-time studies will no longer be eligible to be processed as dependent children. Judicial Reviews And It's Uses. What is a judicial review, and when is it used? 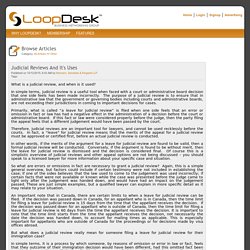 Guidance For Getting Canadian Study Permit By Guidy Mamann. Canada, 22nd September 2015 : With the new school year, one area of consistent confusion for international students are study permits, and when a work permit is also required for their particular academic program. “Study permits should be straight forward, but there are tricky areas that trip up many international students coming to Canada...” said Guidy Mamann, a Toronto immigration lawyer. First, you must be accepted at a designated learning institution (DLI) in Canada, and you also need to have the right documents, including: 1. Original acceptance letter from the DLI; 2. Proof of identity; 3. Having a valid study permit includes: • Ability to work part-time if you are enrolled as a full-time student, in good standing; • Ability to renew your study permit from within Canada, as required.

They either must have a pre-approved visa prior to arriving in Canada, or if they are from a visa-exempt country, they must be evaluated at the port-of-entry for admissibility. So what constitutes inadmissibility? According to Canada’s Immigration and Refugee Protection Act, there are a number of grounds on which visitors to Canada could be deemed as inadmissible.

Clearly the first four grounds of security, human or international rights violations, serious criminality and organized criminality refer to an individual’s past actions. About The Author: