What is Tibetan Dream Yoga? « Dream Yoga. In Tibetan Yoga and Secret Doctrines (Evans-Wentz, trans., London: Oxford University Press, 1935) dream yoga is one of six subtypes of yoga elaborated by the Tibetan guru Marpa and passed down by his well-known disciple Milarepa. 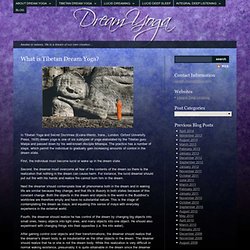 The practice has a number of steps, which permit the individual to gradually gain increasing amounts of control in the dream state. First, the individual must become lucid or wake up in the dream state. Second, the dreamer must overcome all fear of the contents of the dream so there is the realization that nothing in the dream can cause harm. For instance, the lucid dreamer should put out fire with his hands and realize fire cannot burn him in the dream. Next the dreamer should contemplate how all phenomena both in the dream and in waking life are similar because they change, and that life is illusory in both states because of this constant change. Finally, the images of deities (Buddhas, Bodhisattvas, or Dakinis) should be visualized in the lucid dream state.

Namaste - वेद Veda. Linda Graham, MFT, Resources for Recovering Resilience. [first presented as a Clinical Conversation at the Community Institute for Psychotherapy, Fall 2008] © Linda Graham, MFT It’s fascinating to learn what’s happening in our brains as we feel accepted or rejected by people closest to us or important to us. 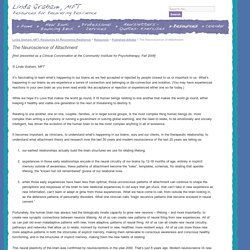 What’s happening in our brains as we experience a sense of connection and belonging or dis-connection and isolation. (You may have experienced reactions in your own brain as you even read words like acceptance or rejection or experienced either one so far today.) While we hope it’s Love that makes the world go round, it IS human beings relating to one another that makes the world go round, either keeping it healthy and viable one generation to the next or threatening to destroy it.

Fortunately, the human brain has always had the biologically innate capacity to grow new neurons – lifelong – and more importantly, to create new synaptic connections between neurons lifelong. 1. How the brain works…how relational learning works 2. 3. 4. 1. 2. 3. Tibetan masters shed light on dream yoga, lucid dreaming, and dying. Over this past summer, I conducted research in northern India on lucid dreaming and dream yoga. 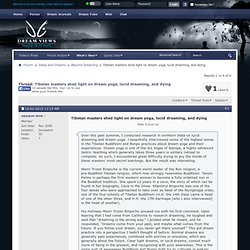 I essentially interviewed some of the highest lamas in the Tibetan Buddhism and Bonpo practices about dream yoga and their experiences. Dream yoga is one of the Six Yogas of Naropa, a highly advanced tantric teaching which generally takes three years in solitary retreat to complete. As such, I encountered great difficulty trying to pry the minds of these masters' most secret teachings. But the result was interesting.

Menri Trizen Rinpoche is the current world leader of the Bon religion, a pre-Buddhist Tibetan religion, which now strongly resembles Buddhism. His Holiness Menri Trizen Rinpoche amused me with his first comment. Dreams and Dying If you have become knowledgable of, or have awareness of, the state of natural light, you will also have that awareness and presence in the moment of dying. Beyond Dream Yoga Sources: Norbu, Namkhai. (1992) Dream Yoga and the Practice of Natural Light. Mudras – Science of Neurons : January 8, 2011 by GMSD · The human body is an unparalleled marvel; of nature. 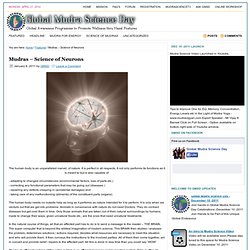 It is perfect in all respects. It not only performs its functions as it is meant to but is also capable of: - adapting to changed circumstances (environmental factors, loss of parts etc.) - correcting any functional parameters that may be going out (diseases ) - repairing any defects creeping in (accidental damages) and - taking care of any malfunctioning (ailments) of the constituent parts (organs). The human body needs no outside help as long as it performs as nature intended for it to perform. In the natural course of things, all that an affected part has to do is to send a message to the master – THE BRAIN. The key to efficient working of this entire system is an efficient message communication system. When a wire carrying messages gets a nick or a dent, when a message carrying frequency encounters an interference, the messages get garbled and do not come across clearly.