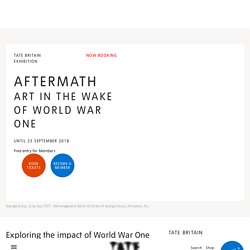 Art was used in many ways in the tumultuous period after the end of the war, from documenting its destructive impact, to the building of public memorials and as a social critique. This fascinating and moving exhibition shows how artists reacted to memories of war in many ways. George Grosz and Otto Dix exposed the unequal treatment of disabled veterans in post-war society, Hannah Höch and André Masson were instrumental in the birth of new art forms dada and surrealism, Pablo Picasso and Winifred Knights returned to tradition and classicism, whilst others including Fernand Léger and C.R.W Nevinson produced visions of the city of the future as society began to rebuild itself.

The poets of First World War - History Extra. Propaganda During World War 1 - Opening Pandora's Box I THE GREAT WAR Special. Lesson 4: Prep' Activity. Prep' Activité - Let's debate about colonies in WWI. A world war. Canada was a self-governing British dominion: it had its own elected Parliament and government but it was still dependent on Britain for some decisions, especially in foreign relations. 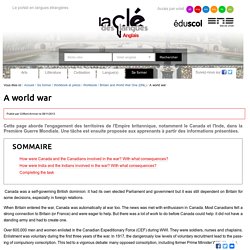 When Britain entered the war, Canada was automatically at war too. The news was met with enthusiasm in Canada. Most Canadians felt a strong connection to Britain (or France) and were eager to help. But there was a lot of work to do before Canada could help: it did not have a standing army and had to create one. Over 600,000 men and women enlisted in the Canadian Expeditionary Force (CEF) during WWI. Prep Activity Source - Robert Lindsay Mackays First World War Diary. Robert Lindsay Mackay's First World War Diary. 100 Years On. The Nation on its Honour. More than three years after the outbreak of the First World War, on February 3rd, 1917, the recently appointed Food Controller, Lord Devonport, announced the first government-sponsored system of food control. 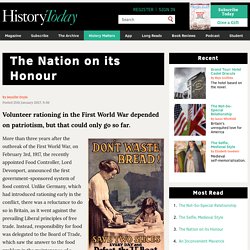 Unlike Germany, which had introduced rationing early in the conflict, there was a reluctance to do so in Britain, as it went against the prevailing Liberal principles of free trade. Instead, responsibility for food was delegated to the Board of Trade, which saw the answer to the food problem in the maintenance of a steady supply of imports rather than restrictions. Newspapers and periodicals carried notices appealing to the patriotism of British consumers. The Daily Mail and several other publications printed the same article on different dates in August 1914 on war economy, proclaiming that: ‘It has become a patriotic duty as well as a wise precaution to reduce expenditure all round, to jettison luxury in money, food, fuel and the rest.’

À L'Assaut. Female Tommies: women in the First World War. Following the declaration of war in August 1914, women formed long queues at local labour exchanges to volunteer for whatever roles were available. 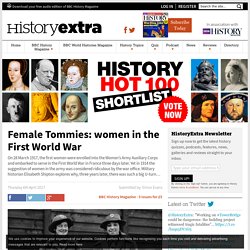 New organisations such as the Women’s Emergency Corps sprang into action to co-ordinate employment, while Voluntary Aid Detachment (VAD) staff organised basic training for eager new volunteers. Female medics such as Dr Elsie Inglis offered their services to the Royal Army Medical Corps but were flatly refused. As far as the British military was concerned, nursing was the only suitable military role for women: over the course of the war, 19,000 women served as nurses and between 70,000-100,000 as VADs. Meanwhile, a small but determined number of women established their own privately funded medical organisations such as the Scottish Women’s Hospital and the Women’s Hospital Corps and made their own way overseas. “Britain should have stayed out of the First World War” says Niall Ferguson. Army recruits take the oath in White City, London, December 1914. 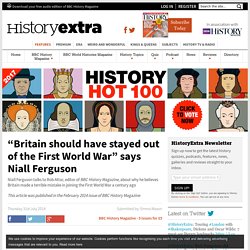 “Creating an army more or less from scratch was a recipe for disastrous losses,” claims Niall Ferguson. (Getty Images) The First Cyborg. New Publication on European Commemoration of World War I Freely Available Online - EUROCLIO - European Association of History Educators. How are past events commemorated today? 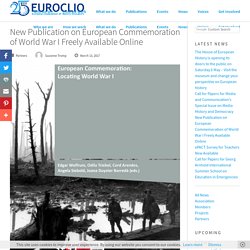 Commemoration strongly depends on the contemporary views of the past. A conference that took place in 2014, “Europäische Erinnerungskulturen – European Commemoration 2014”, touched upon this topic and gave an overview of initiatives, narratives and commemorations taking place across Europe. It provided an opportunity to analyse and discuss different current perceptions on what World War I still stood for a hundred years later. This topic is also central in European Commemoration: Locating World War I, a new anthology that is now published and freely available online. This publication reflects on questions like “What are the correlations between national, transnational and European perspectives?” La Première Guerre mondiale dans les Archives de la Planète - Accueil. Site d'Anglais de l'Académie de Grenoble - Séquence 'Aspects of Britain, aspects of War' S'informer : Histoire Géographie lycée - Se préparer à l'épreuve orale de DNL Histoire - géographie / Anglais en section européenne. 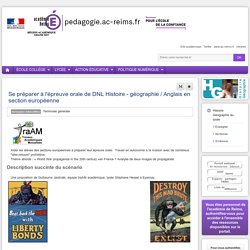