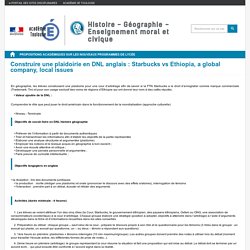 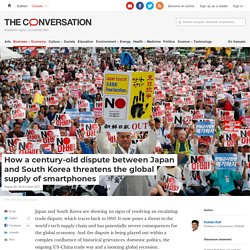 It now poses a threat to the world’s tech supply chain and has potentially severe consequences for the global economy. And the dispute is being played out within a complex confluence of historical grievances, domestic politics, the ongoing US-China trade war and a looming global recession. Japan has officially removed South Korea from its list of trusted trade partners that receive preferential treatment for importing sensitive Japanese-made goods, as of August 28. The list of goods includes chemicals that are crucial to producing the semiconductor memory chips found in most modern electronic devices.

Facebook's Libra may be quite attractive in developing countries. Facebook’s Libra cryptocurrency has taken a lot of criticism from Western government officials and media commentators – but it’s not meant for them. 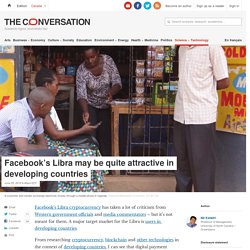 A major target market for the Libra is users in developing countries. From researching cryptocurrency, blockchain and other technologies in the context of developing countries, I can see that digital payment systems are already attractive. The guts of an Apple iPhone show exactly what Trump gets wrong about trade. Crack open an iPhone and you’ll begin to see why President Donald Trump’s ongoing trade war with China doesn’t make sense. 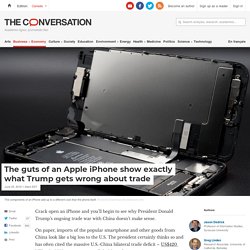 On paper, imports of the popular smartphone and other goods from China look like a big loss to the U.S. The president certainly thinks so and has often cited the massive U.S. -China bilateral trade deficit – US$420 billion in 2018 – as a reason to fight his trade war. When an iPhone X arrives in the U.S., it adds about $370 – its factory cost – to the deficit. All told, iPhones add tens of billions of dollars a year to the U.S. deficit with China, which is the gap between imports and exports. Whats-going-on-in-this-graph-sept-12-2018. How your flip-flops reveal the dark side of globalisation. As you pack for your holidays, don’t forget to pack your flip-flops – and treat them with respect, they may have travelled more than you and witnessed things you cannot see. 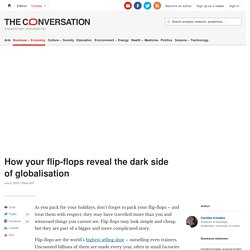 Globalization. The life cycle of a t-shirt - Angel Chang. Time. This weekend, the BRICS countries—Brazil, Russia, India, China and South Africa—will convene in the Chinese city of Xiamen for their annual summit. 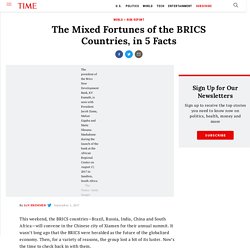 It wasn’t long ago that the BRICS were heralded as the future of the globalized economy. Then, for a variety of reasons, the group lost a bit of its luster. Now’s the time to check back in with them. 1. BRICS straddle one quarter of the world The story of the BRICS—or technically, BRIC countries (South Africa joined in 2010)—begins with Goldman Sachs chief economist Jim O’Neill, who wrote a paper in 2001 arguing that these were the emerging superstars most likely to dominate the 21st century globalized economy. Explicit cookie consent. Resourcetrade.earth. Test Triad. geography. Fella/Emma/Antoine EL-FODIL/THILL/MAGNI... Mapping the Flow of International Trade. According the UN’s Comtrade database, the global market for imported goods totaled $15.6 trillion in 2015. 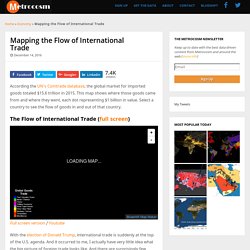 This map shows where those goods came from and where they went, each dot representing $1 billion in value. Many Americans Travel to Other Countries for Medical Care. Eleven million people worldwide travel to other countries for low-cost medical treatment. 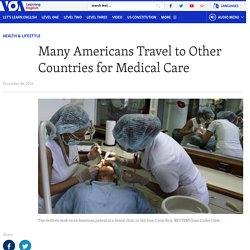 This kind of travel is known as “medical tourism.” Experts say people spend hundreds of billions of dollars on medical tourism every year. And, experts predict the industry will grow by up to 25 percent a year over the next 10 years. VISA and Oxford Economics recently studied medical tourism trends. The study found that such travel is increasing because of the rising cost of medical treatments, the aging of societies and advances in international transportation. A company called MedRepublic is connecting doctors with people around the world who need medical care. “Our software allows patients to use our website so they can search for doctors directly and talk to them," he said. The-iphone-economy. Log In. The lesson begins by having students investigate where their possessions are manufactured; then they use a Times video and article to help them better understand the complex consequences of increased trade. 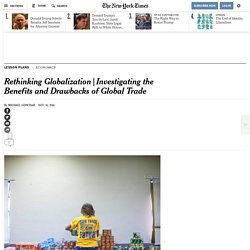 Further down, we offer opportunities for debate and argument writing, analyzing the effects of global trade abroad, and doing additional research. Warm Up: What Countries Make the Products We Buy? Photo. We've Reached the End of Global Trade. Rana Foroohar is TIME's assistant managing editor in charge of economics and business. 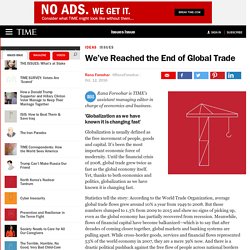 Globalization is usually defined as the free movement of people, goods and capital. It’s been the most important economic force of modernity. Until the financial crisis of 2008, global trade grew twice as fast as the global economy itself. Yet, thanks to both economics and politics, globalization as we have known it is changing fast. Statistics tell the story: According to the World Trade Organization, average global trade flows grew around 10% a year from 1949 to 2008.