Au fil des alpagas. The processing process - The Border Mill. Wool and other animal fibers in South America. Sans titre. Though adorable, for many Americans, alpacas were a terrible investment, Franz Josef Heinrichs Alpaca’s are great. 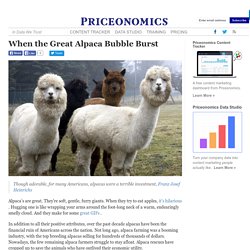 They’re soft, gentle, furry giants. When they try to eat apples, it's hilarious . Hugging one is like wrapping your arms around the foot-long neck of a warm, endearingly smelly cloud. And they make for some great GIFs . In addition to all their positive attributes, over the past decade alpacas have been the financial ruin of Americans across the nation. “Some owners have found they can’t give the animals away for free,” Modern Farmer reported in 2014. How did this happen? “The Investment You Can Hug” American alpaca population, Rosie Cima, Priceonomics; data via Sexton and Saitone The American alpaca industry was born in 1984 when the first alpacas were brought to the United States from South America. As livestock, alpacas are primarily valued for their “fiber” -- the industry term for wool. The real money was in breeding: raising alpacas to produce more alpacas. British Alpaca Society.

About Alpacas. The Alpaca (vicugña pacos) is a domesticated species of South American camelid. 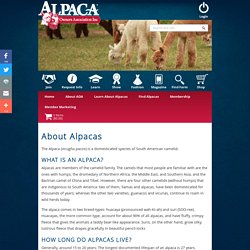 What is an alpaca? Alpacas are members of the camelid family. The camels that most people are familiar with are the ones with humps; the dromedary of Northern Africa, the Middle East, and Southern Asia, and the Bactrian camel of China and Tibet. However, there are four other camelids (without humps) that are indigenous to South America: two of them, llamas and alpacas, have been domesticated for thousands of years; whereas the other two varieties, guanacos and vicunas, continue to roam in wild herds today. The alpaca comes in two breed-types: huacaya (pronounced wah‑KI‑ah) and suri (SOO‑ree). How long do alpacas live? Generally, around 15 to 20 years. How are alpacas different from llamas? People often confuse alpacas with llamas. Are alpacas an "exotic species," or are they considered simply "livestock? " Do alpacas spit? All members of the camel family use spitting as a means of negative communication. Alpaca Fiber Production Statistics.

Alpaca fiber is a rare commodity on the global markets. 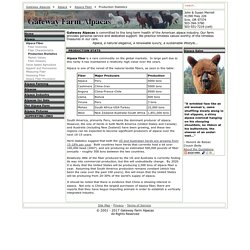 In large part due to this rarity it has maintained a relatively high value over the years. Alpaca is one of the rarest of the natural textile fibers, as seen in this table: South America, primarily Peru, remains the dominant producer of alpaca. However, the size of herds in both North America (United States and Canada) and Australia (including New Zealand) have been growing, and these two regions can be expected to become significant producers of alpaca over the next 10-15 years. Herd statistics suggest that both the US and Australian herds are growing from 15-18% per year. Relatively little of the fiber produced by the US and Australia is currently finding its way into commercial production, but this will undoubtedly change. It should be noted that there is evidence that China is showing interest in alpaca.

Alpaca Overview: The Alpaca Market Then and Now. When we first “discovered” alpacas 12 years ago, we were highly skeptical of the business model. 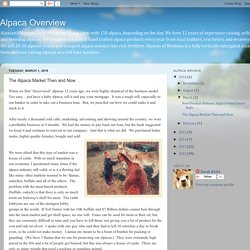 Too easy – just have a baby alpaca, sell it and pay your mortgage. It was a tough sell, especially to our banker in order to take out a business loan. But, we penciled out how we could make it and stuck to it. After nearly a thousand cold calls, marketing, advertising and showing around the country, we were a profitable business in 9 months. We had the money to pay back our loan, but the bank suggested we keep it and continue to reinvest in our company. We were afraid that this type of market was a house of cards. The difference with alpaca is that it is hard to argue against extremely soft, warm, high performance clothing. Alpacas: Loveable Lawnmowers No More. The Alpaca Industry Matures, With Growing Pains By Kaitlin Bell Barnett on November 6, 2014 “Super Sale, Female Alpacas for $1000,” the ads proclaimed, in all caps. 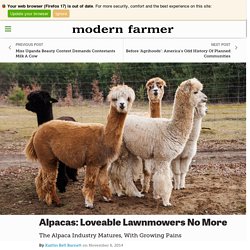 The offer was 90 percent off the animals’ original purchase price, the owners claimed. Males could be had for just $200 a head. But the deep discounts, advertised month after month on Facebook, Twitter and the website of Jocelyn’s Alpaca Ranch, didn’t raise enough cash to save the farm – or its alpacas. Last winter, the Polk County Sheriff’s Department raided the 21-acre ranch, located in the rolling foothills of Oregon’s Coastal Range. ‘The biggest marketing pushes were calling them a huggable investment and attracting people who just thought they were gorgeous little lawn ornaments.’ It was a grisly scene, which made for a dramatic newspaper copy. Robert claimed he and his wife had sunk their life savings – some $750,000 – into their breeding operation over the past decade.