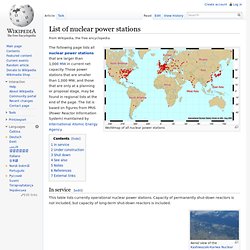 Those power stations that are smaller than 1,000 MW, and those that are only at a planning or proposal stage, may be found in regional lists at the end of the page. The list is based on figures from PRIS (Power Reactor Information System) maintained by International Atomic Energy Agency. In service[edit] This table lists currently operational nuclear power stations. Under construction[edit] This table lists stations under construction or operational stations with under-construction reactors and current net capacity under 1,000 MW.

Shut down[edit] This table lists stations that are permanently shut down. See also[edit] List of nuclear reactors Notes[edit] References[edit] External links[edit] How nuclear plants work. Mighty power from tiny atoms A nuclear power plant is not all that different from coal, oil, or gas fueled plants. 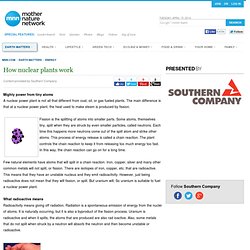 The main difference is that at a nuclear power plant, the heat used to make steam is produced by fission. Fission is the splitting of atoms into smaller parts. Some atoms, themselves tiny, split when they are struck by even smaller particles, called neutrons. Each time this happens more neutrons come out of the split atom and strike other atoms. This process of energy release is called a chain reaction. Few natural elements have atoms that will split in a chain reaction. What radioactive means Radioactivity means giving off radiation. URANIUM PELLETS: Pellets that look like these have the power of many tons of coal. Heat makes it work As atoms split and collide, they heat up. Pressurized Water Nuclear Power Reactor Boiling Water Nuclear Power Reactor Clean air One of the greatest benefits of nuclear plants is that they produce emissions-free energy. Indian nuclear plants to bolster safety measures. The regulator is also planning to levy a licence fee as well as charge for other services to be financially self-sufficient. 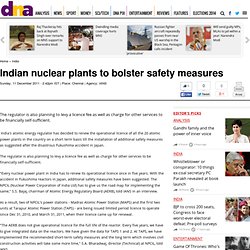 India's atomic energy regulator has decided to renew the operational licence of all the 20 atomic power plants in the country on a short term basis till the installation of additional safety measures as suggested after the disastrous Fukushima accident in Japan. "Every nuclear power plant in India has to renew its operational licence once in five years. With the accident in Fukushima reactors in Japan, additional safety measures have been suggested. The NPCIL (Nuclear Power Corporation of India Ltd) has to give us the road map for implementing the same," S.S. Bajaj, chairman of Atomic Energy Regulatory Board (AERB), told IANS in an interview. "The AERB does not give operational licence for the full life of the reactor. Krishnamurthy said the post-Fukushima safety measures could be divided into short- and long-term measures. List of books about nuclear issues.

List of books about nuclear issues From Wikipedia, the free encyclopedia Jump to: navigation, search The expanding fireball from the "Badger" United States nuclear test. 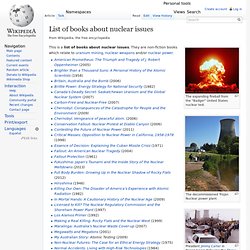