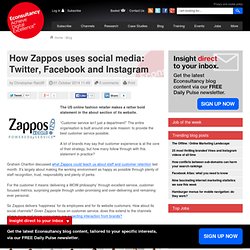 “Customer service isn’t just a department!” The entire organisation is built around one sole mission: to provide the best customer service possible. A lot of brands may say that customer experience is at the core of their strategy, but how many follow through with this statement in practice? Why Alibaba is storming rural China. When Mao was leading a Communist insurrection against the Nationalist Chinese government in the 1920s and 30s, his basic strategy was to use the country’s vast countryside and hinterland to encircle the cities. 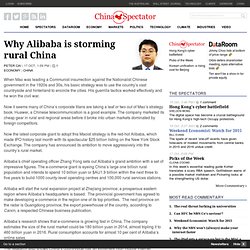 His guerrilla tactics worked effectively and he won the civil war. Now it seems many of China’s corporate titans are taking a leaf or two out of Mao’s strategy book. Huawei, a Chinese telecommunication is a good example. The company marketed its cheap gear in rural and regional areas before it broke into urban markets dominated by foreign competitors. Tomas Maier on His Store Opening - Dirk Standen Interview - Style.com. When I decided to start this new series, which will look at how developments like e-commerce, globalization, and the accelerated fashion cycle are changing the way we consume, the first person I wanted to interview was Tomas Maier. 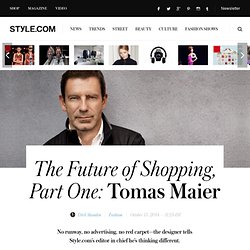 It seemed to me the designer was already thinking about these questions—and, knowing him, with a certain precision. He is about to embark on a major expansion of his Tomas Maier line, which until now has consisted mainly of a small chain of cultish stores. And while he will also keep a firm hold of the reins at the luxury brand Bottega Veneta, where he has been creative director since 2001, he is planning a very different model for his namesake label—no runway show, no advertising, a lower price point, and an emphasis on everyday clothes, all with the goal of “making a direct connection with the consumer.” I sat down with Maier in his midtown design studio.

Chapter 1 You’re opening a new store on Madison Avenue on October 15, the first of several. Yeah. Chinese actor tests out paid membership for fans in WeChat. In the past few days, Chinese tech and entertainment journalists alike have turned their attention to the WeChat account of handsome Chinese actor Chen Kun (best known internationally for a role in Balzac and the Little Chinese Seamstress). 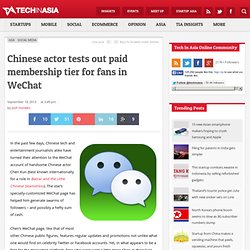 The star’s specially-customized WeChat page has helped him generate swarms of followers – and possibly a hefty sum of cash. Chen’s WeChat page, like that of most other Chinese public figures, features regular updates and promotions not unlike what one would find on celebrity Twitter or Facebook accounts. Yet, in what appears to be a first for the messaging platform, fans who want want a little more Chen in their lives can opt to pay for a WeChat-based membership tier that provides access to diary entries, music, private pictures, and daily greetings, as well as access to a social fans-only space where members can communicate and send stickers. Membership is not cheap even by Western standards. (Editing by Paul Bischoff and Steven Millward) Jing Daily: The Business of Luxury and Culture in China. Social media is crucial to any advertising campaign in China—it is the primary platform in which consumers engage with brands. 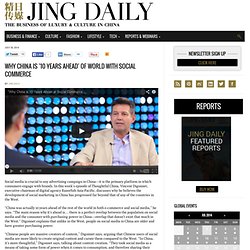 In this week’s episode of Thoughtful China, Vincent Digonnet, executive chairman of digital agency Razorfish Asia-Pacific, discusses why he believes the development of social marketing in China has progressed far beyond that of any of the countries in the West. Kuaisou: Baidu's smart chopsticks detect dodgy cooking oil. He’s not joking: Baidu CEO Robin Li unveils the ‘smart chopsticks’. 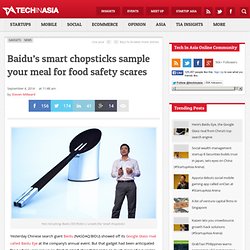 Yesterday Chinese search giant Baidu (NASDAQ:BIDU) showed off its Google Glass rival called Baidu Eye at the company’s annual event. But that gadget had been anticipated for a whole year. However, Baidu’s smart chopsticks came as much more of a surprise. The smart chopsticks, called Kuaisou, can test food for safety issues. It’s limited to sampling the oil to detect dangerously substandard cooking oil – one of all too many food safety issues plaguing China – but it’s still an interesting and practical tool. 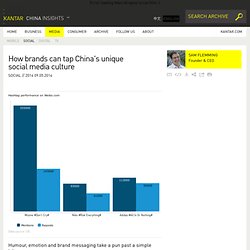 Witty content, often involving Chinese-language puns or plays on words on social media, can make a huge impact here. That's partly because people in China have a relative dearth of exciting mainstream entertainment choices and trusted information sources, and because the one-child policy has left young people looking for opportunities to socialize. So how are foreign brands tapping into China's vibrant internet and social media culture? Take Mizone, a popular drink brand from Danone. During the World Cup, Mizone used Weibo, China's Twitter-like platform, to reach football fans with a series of creative comics. After England's surprisingly early exit, Mizone created a comic featuring a tearful Queen's Guard that referred to England as the "Three Kitty Cats" instead of the usual nickname "Three Lions.