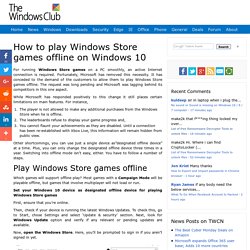 Fortunately, Microsoft has removed this necessity. It has conceded to the demand of the customers to allow them to play Windows Store games offline. The request was long pending and Microsoft was lagging behind its competitors in this one aspect. While Microsoft has responded positively to this change it still places certain limitations on main features. Infographic on the Beastly Threats of IT Security. Security threats to your data are a frightening reality and are increasing by the day. 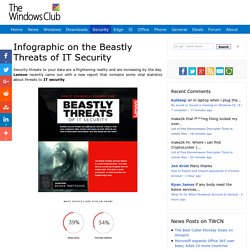 Lenovo recently came out with a new report that contains some vital statistics about threats to IT security. Thier Infographic states that around 39% of your devices are stolen from work area while 34% from your personal vehicles. Also, the number of devices lost is actually 100 times a number of devices stolen. The theft of devices isn’t even a big problem compared to the magnitude of people losing their devices themselves. Change WiFi Roaming Sensitivity to improve Wi-Fi reception. If you wish to improve the Wi-Fi reception and performance on your Windows PC, you may want to consider changing the WiFi Roaming Sensitivity or Aggressiveness. 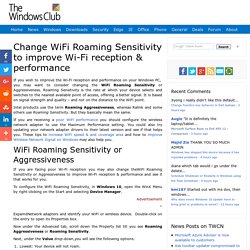 Roaming Sensitivity is the rate at which your device selects and switches to the nearest available point of access, offering a better signal. How to play MP4 files on Windows 10. Can’t play MP4 on Windows 10? 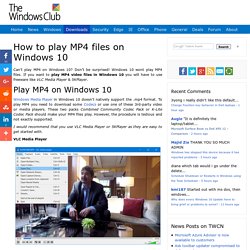 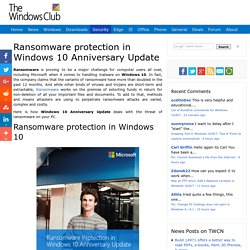 In fact, the company claims that the variants of ransomware have more than doubled in the past 12 months. How to disable About:Flags page in Microsoft Edge web browser. Edge browser includes a hidden about:flags configuration page that lets you tweak the browser’s settings. 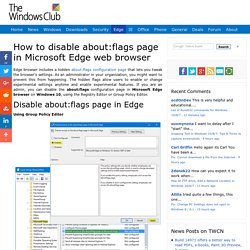 As an administrator in your organization, you might want to prevent this from happening. The hidden flags allow users to enable or change experimental settings anytime and enable experimental features. If you are an admin, you can disable the about:flags configuration page in Microsoft Edge browser on Windows 10, using the Registry Editor or Group Policy Editor. Using Group Policy Editor. Slack Touches 4 Million Daily Users and 1.25 Million Paid Customers.

Slack is a messaging app for teams. 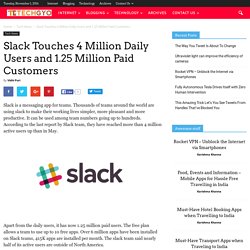 Thousands of teams around the world are using slack to make their working lives simpler, more pleasant and more productive. It can be used among team numbers going up to hundreds. According to the last report by Slack team, they have reached more than 4 million active users up than in May. Apart from the daily users, it has now 1.25 million paid users. Must-Have Hotel Booking Apps when Travelling to India. Accommodation is an essential decision for the whole travel experience. 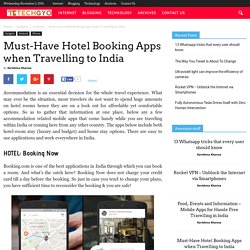 What may ever be the situation, most travelers do not want to spend huge amounts on hotel rooms hence they are on a look out for affordable yet comfortable options. So as to gather that information at one place, below are a few accommodation related mobile apps that come handy while you are traveling within India or coming here from any other country. The apps below include both hotel-room stay (luxury and budget) and home stay options. There are easy to use applications and work everywhere in India. HOTEL: Booking Now. 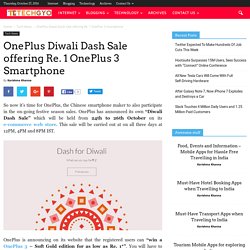 OnePlus has announced its own “Diwali Dash Sale” which will be held from 24th to 26th October on its e-commerce web store. This sale will be carried out at on all three days at 12PM, 4PM and 8PM IST. OnePlus is announcing on its website that the registered users can “win a OnePlus 3 – Soft Gold edition for as low as Re. 1*”.

You will have to complete a four-step registration process to participate in the OnePlus Diwali Dash sale. Participation process involves the users to register their accounts for the Diwali sale on the OnePlus web store. Diwali 2016: Gift your family & friends these amazing products. This festive season, we have a range of products that will prove to be the best gift items to surprise your friends and family. 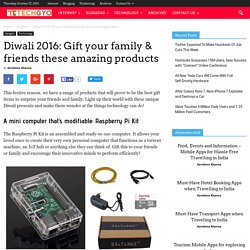 Now Book an Ola or Uber via the Google Search App. Good news for all those Ola and Uber fans. Google has now teamed up with both the cab service providers to make cab bookings even more hassle-free. Thus, you can now look out for directions and choose the taxi service directly within the mobile search browser or Google Search app. Xiaomi reportedly building a Smartphone with Bendable Display. According to a report by The Verge, Chinese smartphone maker “Xiaomi” is now joining the race and is reportedly working on its own version of a bendable smartphone.

Such a device by Xiaomi made its public appearance over the internet through a 30-sec video that was posted last week. Though the video (courtesy of Gizmodo China) did not reveal the phone being bent but it rather displayed a bent screen being super responsive to touch. Earlier this year, another Chinese company Lenovo became the first one to display two such futuristic ideas – a bendable tablet that becomes a phablet and a foldable smart phone that can be turned into a wearable device. Such flexible, foldable and bendable smartphone displays are truly the future approaches. 7 Reasons that would make you Switch to the Android Nougat. There are chances that you might be very happy with your Android 6.0 Marshmallow experience. But there also are strong reasons to why you should make a switch. Android’s latest update is just upon us, and here is why you might be interested in Android 7.0 Nougat.

One of the main reasons here is the interface tweaks that keeps the Android experience fresh. Customize your "Facebook Reactions" with these Engaging Chrome Extensions. It was only a few months back that we witnessed the standard “Like button” of Facebook extending itself to “reactions.” Facebook decided to recreate its Like button in a more engaging manner.

They got a broad and essential range of human emotion which condensed down to a single expression and i.e. “liking or disliking something.” To be precise, Facebook added five reactions apart from “like” – “love”, “haha”, “wow”, “sad” and “angry”. The icons look like basic emoji and Facebook did justice to the “oh so simple” like button. Just enter the Chrome Web Store, install the following extensions for your browser and simply replace the Facebook offered standard reaction icons. 8 Cool Ways to use the USB OTG Cable on your Android Device. USB OTG cable opens up a world of opportunities for the Android users. You might have probably used the OTG (On-The-Go) cable yourself or may have seen someone else doing that. And you would surely agree that it is such a useful tool that enables communication between two devices. The OTG cable is one of the best inventions that’s generally used to extend your device’s functionality.

10 Most Interactive Online Learning Apps to know about Anything. There are a plenty of mobile apps in the education category. Free Wi-Fi launched across DMRC’s Airport Express Line. The Delhi Metro Rail Corporation (DMRC) inaugurated on Friday a free Wi-Fi service across all the six stations of the premium Airport Express line. The facility is launched at the Shivaji Stadium metro station. Extensions to Highlight Text on the Web - Highly, Liner or Marker. Google News launches "fact check" label for its articles.

Google recently has introduced a new feature called as the “fact check” that will add a label next to the news stories in the search results that a person makes. This will help the readers to ensure fact-checking in comprehensive articles of the Google News. The Fact Check will appear with the other news organisations in the Google News. Steve Jobs: Even after 5 years, he still is the greatest innovator - It was a single man who held the tech world into captivity every time he came on the stage. Now you can TAG friends individually in group chats on WhatsApp - Just in case you missed this wonderful update for your WhatsApp mobile application, let me tell you more about it. WhatsApp developers have silently launched an extra feature to the hugely-popular messenger for both iOS and Android users.

4G VoLTE Budget Smartphone Compatible With JIO [Part-2] - 4G VoLTE Budget Smartphone Compatible With JIO [Part-1] - How to Buy Gadgets from the US and Get them Delivered to India - Just in case the title doesn’t sound obvious, let me tell you, this article targets those people who want to shop & order huge subsidized gadgets or other products but are residing outside the US. Podo - $50 Stickable & Pocket Size Camera - 5 Cool Chrome Extensions for Better YouTube Experience - The most popular video streaming platform, YouTube, is undoubtedly loaded with some pretty cool features. Reliance Jio vs Airtel iPhone 7 offers Compared. No autonomous cars for India and Brazil till drivers aren't disciplined: Carlos Ghosn - Seven obstacles in the way of Technology for Self-Driving Cars - Prisma for iOS Adds 15 Seconds Video Support -