QAI QUEST 2017. Panel Discussion Using Selenium in your Test Automation Solution The Panelists will particularly focus on the capabilities of Selenium and how they have implemented it for successful test automation projects. 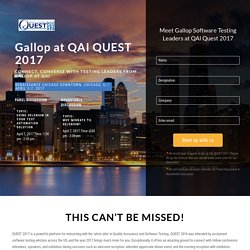 Each panelist will share their distinct and resourceful experience of working with Selenium and explain a specific component of their Selenium Framework that they have evolved as a best practice. You can also separately catch up with the panelists during breakout sessions for detailed discussions and demos of their Selenium solutions. April 7, 2017 Time: 1:30 pm - 2:30 pm Roundtable Discussions Why Migrate to Selenium? With Selenium’s intrinsic benefits and commercial viability, enterprises are investing time and efforts to migrate their existing test automation scripts from commercial tools to Selenium. 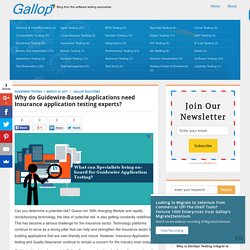 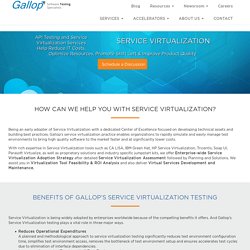 With over 10 years of experience in running large and complex testing engagements for clients in North America across diverse verticals, you can be assured about quality of Service virtualization testing. Why is DevOps Testing integral to Digital Transformation Strategies? History has proved that companies and brands that have not been able to mature with technology upgrade have fallen behind in the race and have become obsolete. 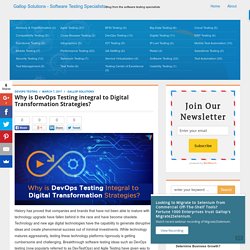 Technology and new age digital technologies have the capability to generate disruptive ideas and create phenomenal success out of minimal investments. While technology matures aggressively, testing these technology platforms rigorously is getting cumbersome and challenging. Breakthrough software testing ideas such as DevOps testing (now popularly referred to as DevTestOps) and Agile Testing have given way to Continuous Testing and Continuous Delivery. Let’s look at some recent examples of companies that have brought out a ‘360 degree’ spin in the idea of success by massively leveraging technology and digital transformation strategies. Can Investing in IP-led Testing Determine Business Growth? Enterprises big-medium-small are in serious need of a robust Enterprise Resource Planning (ERP) software to seamlessly operate and deliver on their core business objectives. 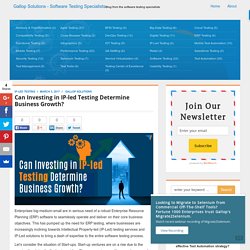 This has pumped up the need for ERP testing, where businesses are increasingly inclining towards Intellectual Property-led (IP-Led) testing services and IP-Led solutions to bring a dash of expertise to the entire software testing process. Let’s consider the situation of Start-ups. Start-up ventures are on a rise due to the passion they bring for the business idea. They are coming up with some phenomenal inventions not only to make human life comfortable, but also bring about a transformation in the overall socio-environmental lifecycle. At the same time, they do not want to waste their precious formative years in taking care of the operational hassles. Top 5 factors to consider while testing Financial Applications. A report by Research and Markets estimates that the global Financial Services Application Market will clock $103.66 billion by 2019, at a CAGR of 9.1% during the forecast period 2014-2019. 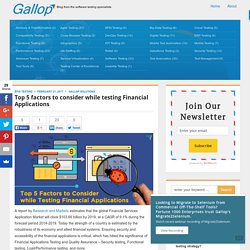 Today the strength of a country is estimated by the robustness of its economy and allied financial systems. Ensuring security and accessibility of the financial applications is critical, which has hiked the significance of Financial Applications Testing and Quality Assurance – Security testing, Functional testing, Load/Performance testing, and more. Financial technology organizations (commonly referred to as Fintechs) emerged to become a craze in 2015, and start-ups raised volumes of funds from banks and financial institutions to develop innovative platforms to make financial services more accessible and use-friendly. The key concern areas have been performance, security, and functionality. It sure is. How can you boost Software Testing productivity with Test Data Management.

Big brands and technology trendsetters are pacing up to bring self-driving cars to the market. 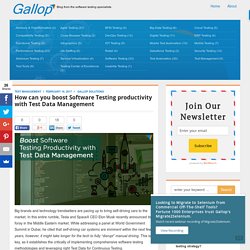 In this entire rumble, Tesla and SpaceX CEO Elon Musk recently announced its foray in the Middle Eastern market. While addressing a panel at World Government Summit in Dubai, he cited that self-driving car systems are imminent within the next few years, however, it might take longer for the tech to fully “disrupt” manual driving. This is key, as it establishes the critically of implementing comprehensive software testing methodologies and leveraging right Test Data for Continuous Testing.

Taking the announcement further, Elon Musk has announced Tesla’s official entry in the UAE market with its Model S and Model X crossover vehicles. He further mentioned, ‘My guess is that in probably 10 years it will be very unusual for cars to be built that are not fully autonomous.’ How critical is Software Testing for Healthcare IT. Healthcare IT is growing consistently for some obvious and essential reasons. 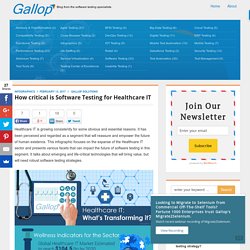 It has been perceived and regarded as a segment that will reassure and empower the future of human existence. This infographic focuses on the expanse of the Healthcare IT sector and presents various facets that can impact the future of software testing in this segment. What are the key elements for an effective Test Automation strategy? Some of the key reasons for application failure rate are bad user experience and inadequate testing of the application. 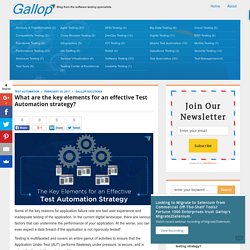 In the current digital landscape, there are various factors that can undermine the performance of your application. At the worse, you can even expect a data breach if the application is not rigorously tested! Testing is multifaceted and covers an entire gamut of activities to ensure that the Application Under Test (AUT) performs flawlessly under pressure, is secure, and is robust for the volatile market conditions. Can Service Virtualization boost Agile testing strategy? 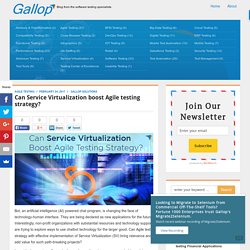 They are being declared as new applications for the future. Interestingly, non-profit organizations with substantial resources and technology support are trying to explore ways to use chatbot technology for the larger good. Can Agile test strategy with effective implementation of Service Virtualization (SV) bring relevance and add value for such path-breaking projects? In an ideal scenario, software testing and operations teams are expected to work in tandem and deliver quality with speed, cost effectively. Can Service Virtualization boost Agile testing strategy? How can Continuous Delivery Accelerate Software Testing and Development? According to projections by market research firm Canalys, the Apple Watch dominated the wearable market during the last quarter and almost the entire 2016.

It further states that Apple is setting records and eating up the market share of its nearest competitor. Selenium Testing Archives. After Google and Uber, Oxford’s self-driving car company Oxbotica in a recent report announced that the localisation and mapping software applied in its prototype vehicles is ready for public use. The company is using Selenium OS for autonomous cars, where the firm applied its Dub4 software tool in the GATEway pods operating in Greenwich and within its own prototype. Read More The opinions expressed in this blog are author's and don't necessarily represent Gallop's positions, strategies or opinions. During 1970s – 1980s, Open Source got commercialized and there were volumes written on its adoption into mainstream. The Open Source Initiative (OSI) came into existence in 1998, which boosted the overall initiative and efforts.

It has been stated that almost 98% of enterprise-level companies have adopted Open Source to address various software related issues and leverage other compelling benefits related to use and ease of adoption. Can Automating the Performance Testing Cycle Speed Up Release Time? Niantic’s Pokemon Go continues to be a craze and one of the trending apps both on iOS and Android. Amongst all and the latest in the Pokemon kitty, Pocket Animals GO still remains a key attraction for gamers, though it has been on the block since 2016. Wild beasts and their presence on your city streets is quite a compelling gig. Another is the performance and responsiveness of the game – reinforcing the significance of Automated Performance Testing and Test Automation in the short-term and long-term.

Web Services Test Accelerator. Can PeopleSoft ERP Testing & Performance Testing Enable the Hospitality Sector? Airbnb with its 2,000,000 listings in 34,000 cities and 191 countries, is definitely taking over the travel industry. Its success can be attributed to the dynamic online platform it offers to the users. Enterprise resource planning (ERP) system is also equally important and a critical tool for managing organizational functions and information controls. PeopleSoft ERP helps manage every aspect that binds the hospitality industry together – human resources, finance, maintenance, stocking, logistics, payroll, security, intelligence, etc. Success of the AirBnb business model or any key player in the hospitality sector has to be attributed to a robust and user-friendly online platform.

Mobile handset companies and application developers definitely take testing seriously and consider it business-critical. Koh Dong-jin, President of Samsung Electronics’ mobile communications business, recently announced that the company has built a large-scale testing facility, where about 700 Samsung researchers and engineers have tested more than 200,000 fully-assembled Note7s and over 30,000 batteries. Considering the challenges and needs of the digital landscape, businesses are increasingly inclining towards Cloud-based/Cloud-enabled mobile device testing. User experience is at the core. Top Testing Conferences in 2017. Whether it is IoT, Smart Devices, Artificial Intelligence (AI), Virtual Reality (VR), Machine Learning, or any other emerging and potent technology for the future, nothing can skip the need for a robust software testing mechanism.

Best Practices for Implementing Agile Testing Across Distributed Teams. Mobile Application Functional Testing. 5 Key Differences Between Multi-Channel and Omni-Channel Testing. Performance Testing Archives. A recent report by Ernst & Young titled ‘Global banking outlook 2016 Transforming talent, the banker of the future’ puts across some interesting findings that hold absolute relevance. It particularly highlights the urgency for transformation and reinvention in the banking sector, particularly in this era of low growth. Can Continuous Testing Ensure Excellence in Quality? Phenomenal changes are taking over the entertainment and infotainment industry.

Television was definitely a game changer several decades back, which today seems like past life. Today, online channels are catching up and entertainment works on demand. You don’t have to wait for the movie to come on the television and then watch it, you can just order it online and wait the LIVE streaming. Similarly, you don’t have to access the television to watch a match, you can watch it on your smart device anywhere anytime!

While we say so, it calls for seamless experience anywhere anytime. An experience report by Thinkwell group states ‘How IP is Dominating Themed Entertainment’. Imagine the pressure this creates to bring about unified experience across various technology platforms that the user will connect at an IP-based themed park/museum. Can DevOps Testing boost your Application Development process? 175 years after the first computer program was written by Ada Lovelace, today we are actually using Mobile applications and depending on them for specific needs. Mobile applications are increasingly getting complex and they work with multiple third party controls. Software Testing. Can Agile Testing Assure Retail Sector the Next Phase of Growth?