Pdfssa4met - PDF Structure and Syntactic Analysis for Metadata Extraction and Tagging. PDFSSA4MET attempts to provide metadata extraction and tagging based on structural and syntactic analysis of content in XML. 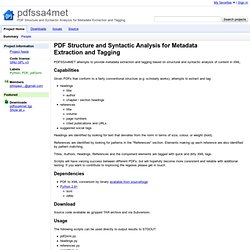 Capabilities Given PDFs that conform to a fairly conventional structure (e.g. scholarly works), attempts to extract and tag: headings title author chapter / section headings references title volume page numbers cited publications and URLs suggested social tags Headings are identified by looking for text that deviates from the norm in terms of size, colour, or weight (bold). References are identified by looking for patterns in the "References" section. Titles, Authors, Headings, References and the component elements are tagged with quick and dirty XML tags. Scripts will have varying success between different PDFs, but will hopefully become more consistent and reliable with additional testing. Python to get Media Metadata. At Babo Labs, we're interested in eliminating work for our digital merchants by providing them enabling technologies. 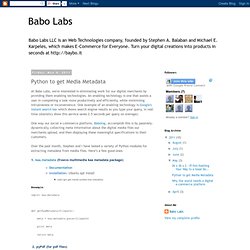 An enabling technology is one that assists a user in completing a task more productively and efficiently, while minimizing intrusiveness or inconvenience. One example of an enabling technology is Google's instant search bar which shows search engine results as you type your query, in real time (statistics show this service saves 2-5 seconds per query on average). One way our social e-commerce platform, Babolog, accomplish this is by passively-dynamically collecting meta information about the digital media files our merchants upload, and then displaying these meaningful specifications to their customers. Over the past month, Stephen and I have tested a variety of Python modules for extracting metadata from media files. Python to get Media Metadata. PDFtk - The PDF Toolkit. PDFtk - The PDF Toolkit PDFtk is a simple tool for doing everyday things with PDF documents. 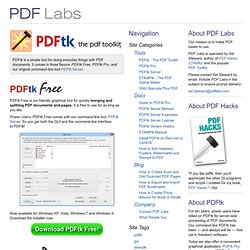 It comes in three flavors: PDFtk Free, PDFtk Pro, and our original command-line tool PDFtk Server. Xpdf. A lightweight XMP parser for extracting PDF metadata in Python. Metadata (title, author, etc.) can be embedded in PDF files in a number of different ways, and can be a bit of a pain to extract. 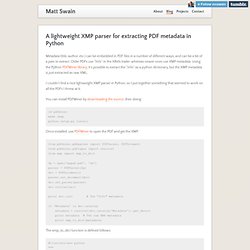 Older PDFs use “Info” in the XRefs trailer, whereas newer ones use XMP metadata. Using the Python PDFMiner library, it’s possible to extract the “Info” as a python dictionary, but the XMP metadata is just extracted as raw XML. I couldn’t find a nice lightweight XMP parser in Python, so I put together something that seemed to work on all the PDFs I threw at it. You can install PDFMiner by downloading the source, then doing: cd pdfminer make cmap python setup.py install Once installed, use PDFMiner to open the PDF and get the XMP. The Stanford NLP (Natural Language Processing) Group. About | Getting started | Questions | Mailing lists | Download | Extensions | Models | Online demo | Release history | FAQ About Stanford NER is a Java implementation of a Named Entity Recognizer. 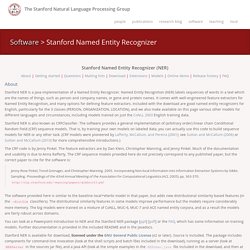 Named Entity Recognition (NER) labels sequences of words in a text which are the names of things, such as person and company names, or gene and protein names. It comes with well-engineered feature extractors for Named Entity Recognition, and many options for defining feature extractors. Included with the download are good named entity recognizers for English, particularly for the 3 classes (PERSON, ORGANIZATION, LOCATION), and we also make available on this page various other models for different languages and circumstances, including models trained on just the CoNLL 2003 English training data. Stanford NER is also known as CRFClassifier. The CRF code is by Jenny Finkel. Jenny Rose Finkel, Trond Grenager, and Christopher Manning. 2005. Getting started This NER system requires Java 1.8 or later. How can I programmatically export pdf annotations (such as a formula encircled in a rectangle) as images.

Ocropus - The OCRopus(tm) open source document analysis and OCR system. Pdfminer 20080727. Scraping PDF with Python. There are several PDF modules available for python, so far I’ve found Slate to be the simplest to use and PDFMiner to be potentially the most powerful but also the most complicated to use. 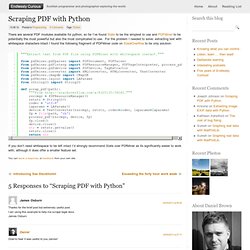 For the problem I needed to solve: extracting text with whitespace characters intact I found the following fragment of PDFMiner code on StackOverflow to be only solution: If you don’t need whitespace to be left intact I’d strongly recommend Slate over PDfMiner as its significantly easier to work with, although it does offer a smaller feature set. You can leave a response, or trackback from your own site. Poppler. Mining Data from PDF Files with Python. Adobe PDF Library. Note: This is the 1st in a series of four articles exploring low-level PDF manipulation using APDFL and DLE When implementing low-level PDF work using APDFL, we are essentially talking about using the API subset called the Cos Layer. 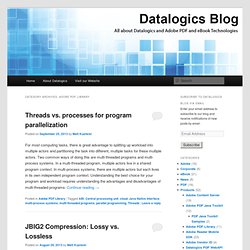 The Cos Layer functions manipulate objects which correspond to the basic PDF object types as specified in section 3.2 of the PDF v1.7 Reference (or section 7.3 of the PDF 32000-1:2008 specification). DLE provides an object-oriented interface to the Cos Layer, but uses the PDF prefix instead of Cos. In general, you need to use Cos-level functions when you want to implement functionality discussed in the PDF spec that is not covered by specific API calls in APDFL. Python Library for Spatial Analytical Functions – GISWiki. DLE using Python. I’ve always had an appreciation for the higher level languages, the ones that make life easier, that let you code rather than worry about the housekeeping. 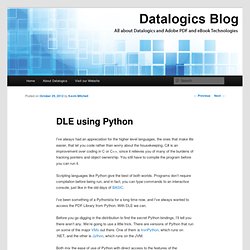 C# is an improvement over coding in C or C++, since it relieves you of many of the burdens of tracking pointers and object ownership. You still have to compile the program before you can run it. Scripting languages like Python give the best of both worlds. Programs don’t require compilation before being run, and in fact, you can type commands to an interactive console, just like in the old days of BASIC. I’ve been something of a Pythonista for a long time now, and I’ve always wanted to access the PDF Library from Python. Before you go digging in the distribution to find the secret Python bindings, I’ll tell you there aren’t any. Both mix the ease of use of Python with direct access to the features of the underlying VM. For this article, I’m going to focus on Jython. Nsi.metadataextractor 1.2. Haypo / hachoir / wiki / hachoir-metadata. 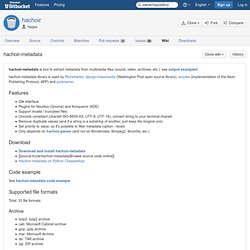 Hachoir-metadata library is used by Plone4artist, django-massmedia (Washington Post open source library), amplee (implementation of the Atom Publishing Protocol, APP) and pyrenamer. Features Gtk interface Plugins for Nautilus (Gnome) and Konqueror (KDE) Support invalid / truncated files Unicode compliant (charset ISO-8859-XX, UTF-8, UTF-16), convert string to your terminal charset Remove duplicate values (and if a string is a substring of another, just keep the longest one) Set priority to value, so it's possible to filter metadata (option --level) Only depends on hachoir-parser (and not on libmatroska, libmpeg2, libvorbis, etc.) Download. An Intro to pyfpdf – A Simple Python PDF Generation Library. Today we’ll be looking at a simple PDF generation library called pyfpdf, a port of FPDF which is a php library. 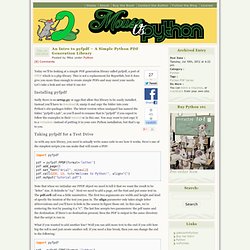 This is not a replacement for Reportlab, but it does give you more than enough to create simple PDFs and may meet your needs. Let’s take a look and see what it can do! Installing pyfpdf Sadly there is no setup.py or eggs that allow this library to be easily installed. Instead you’ll have to download it, unzip it and copy the folder into your Python’s site-packages folder. Kroo/mobi-python. Export PDF Annotations - onekerato. Export Annotations from PDF File to XFDF (Facades) - Aspose.Pdf for .NET - Documentation. Support annotations of highlighted material · Issue #1 · rschroll/prsannots. Python Scripts for Annotation Overrides. Python Scripts for Annotation Overrides. Export pdf annotations only using preview. Python - Parse annotations from a pdf. Command line - How to extract annotations from PDF files?