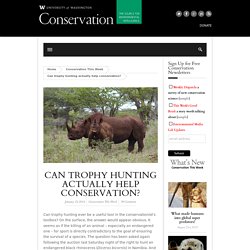 On the surface, the answer would appear obvious. It seems as if the killing of an animal – especially an endangered one – for sport is directly contradictory to the goal of ensuring the survival of a species. The question has been asked again following the auction last Saturday night of the right to hunt an endangered black rhinoceros (Diceros bicornis) in Namibia. And the answer, as usual, is more complicated. The permit was sold for $350,000, well above the previous high bid for a permit in that country, $223,000. And it’s not just rhinos. The issues here are complex and highly politicized. In 2006, researcher Peter A. Lindsey’s team also discovered that hunters were more sensitive to conservation concerns than was perhaps expected. Is there such evidence? Even so, some have expressed concern regarding what the larger message of sanctioned trophy hunts might be.

Fish and Wildlife Service. A lot. 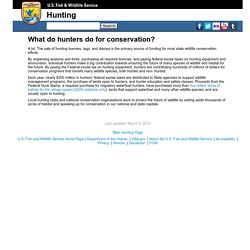 The sale of hunting licenses, tags, and stamps is the primary source of funding for most state wildlife conservation efforts. By respecting seasons and limits, purchasing all required licences, and paying federal excise taxes on hunting equipment and ammunition, individual hunters make a big contribution towards ensuring the future of many species of wildlife and habitat for the future. By paying the Federal excise tax on hunting equipment, hunters are contributing hundreds of millions of dollars for conservation programs that benefit many wildlife species, both hunted and non- hunted.

Each year, nearly $200 million in hunters' federal excise taxes are distributed to State agencies to support wildlife management programs, the purchase of lands open to hunters, and hunter education and safety classes. Getting past the emotions around Cecil the Lion: Hard truths about conservation and trophy hunting. Editor’s note: The death of Zimbabwe’s beloved lion Cecil resulted in an immediate outpouring of emotion and raises the question of the state of conservation and trophy hunting. 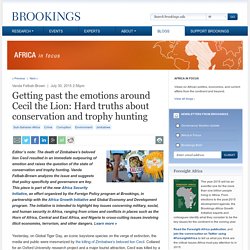 Vanda Felbab-Brown analyzes the issue and suggests that policy specificity and governance are key. This piece is part of the new Africa Security Initiative, an effort organized by the Foreign Policy program at Brookings, in partnership with the Africa Growth Initiative and Global Economy and Development program. The initiative is intended to highlight key issues concerning military, social, and human security in Africa, ranging from crises and conflicts in places such as the Horn of Africa, Central and East Africa, and Nigeria to cross-cutting issues involving illicit economies, terrorism, and other dangers.

Learn more » Yesterday, on Global Tiger Day, an iconic keystone species on the verge of extinction, the media and public were mesmerized by the killing of Zimbabwe’s beloved lion Cecil. Hunting Pros and Cons. Hunting, an activity practiced by many, is a controversial topic with many pros and cons. 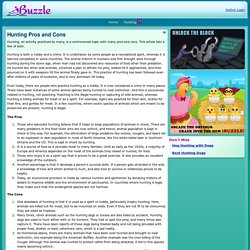 This article lists a few of both. Hunting is both a hobby and a crime. It is undertaken by some people as a recreational sport, whereas it is banned completely in some countries. The animal instinct in humans was first brought alive through hunting during the stone age, when man had not discovered any resources of food other than predation. He hunted like other wild animals, schemed a plan to attract his prey, waited till it approached, and then pounced on it with weapons till the animal finally gave in. Even today, there are people who practice hunting as a hobby. The Pros Those who advocate hunting believe that it helps to keep populations of animals in check.

6 Major Pros and Cons of Hunting. Hunting is one of the very few elusive activities that can considered a hobby or a crime depending on the circumstances. 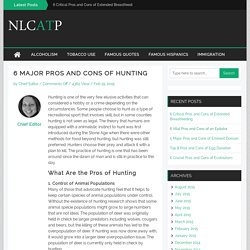 Some people choose to hunt as a type of recreational sport that involves skill, but in some counties hunting is not seen as legal. The theory that humans are equipped with a animalistic instinct to hunt was first introduced during the Stone Age when there were other methods for food beyond hunting, but hunting was still preferred. Hunters choose their prey and attack it with a plan to kill. The practice of hunting is one that has been around since the dawn of man and is still in practice to this day.