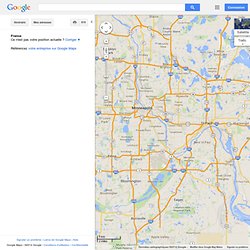 Friends. Sites.google.com/site/mtgerety/ MichaelGerety.com. Photos. Belief Kills Thought. Carrots and Sticks. There are two schools of thought on how to elicit behavior that someone or a group has decided is the way things 'should be'. 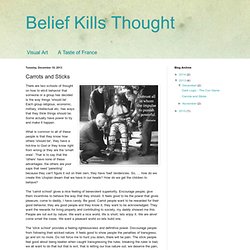 Each group religious, economic, military, intellectual etc. has ways that they think things should be. Some actually have power to try and make it happen. What is common to all of these people is that they know how others 'should be', they have a hot-line to God or they know right from wrong or they are the 'smart ones'. Dark Logic - The Con Game.

It is astounding to me that so many people truly believe with their whole hearts and souls that the scientific community in its entirety, almost, are trying to what? 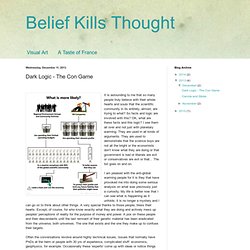 So facts and logic are involved with this? OK, what are these facts and this logic? Color War. Michael Thomas Gerety. 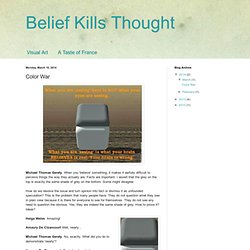 When you 'believe' something, it makes it awfully difficult to perceive things the way they actually are. Facts are important. I assert that the grey on the top is exactly the same shade of grey on the bottom. Some might disagree. How do we resolve the issue and turn opinion into fact or dismiss it as unfounded speculation? Helga Weiss. Amaury De Cizancourt Well, nearly... Power, Diplomacy and Balls: Terrified Republicans. Apparently the Executive Branch of the US government has just wrapped up a deal with Iran that is supposed to reduce the danger that Iran poses to 'the west'. 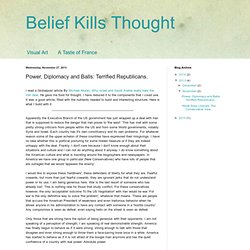 This has met with some pretty strong criticism from people within the US and from some World governments, notably Syria and Israel. Each country has it's own constituency and its own problems. For whatever reason some of the upper echelon of these countries have expressed their misgivings. I have no idea whether this is political posturing for some hidden treasure or if they are indeed unhappy with the deal. The Winning Argument. Recently I had an exchange with a person that I like and respect quite a lot. 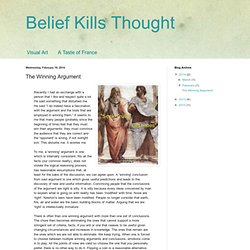 He said something that disturbed me. He said “I do indeed have a fascination with the argument and the tools that are employed in winning them.” Weak Sissy Liberals; The Conservative View. You are definitely delusional, Frank; welcome to the club. 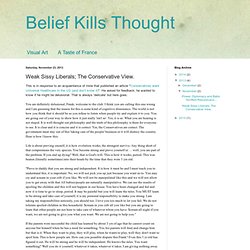 I think you are calling this one wrong and I am guessing that the reason for this is some kind of cognitive dissonance. The world is not how you think that it should be so you refuse to listen when people try and explain it to you. You are going out of your way to show how it just really 'isn't so'. Who is to Blame? Steve Moore. Recently someone asked my to comment on a Wall Street Journal article titled "The Pelosi-Reid Deficits" by Steve Moore. 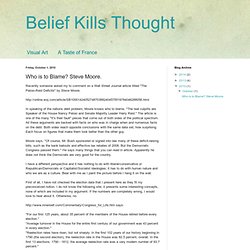 In speaking of the nations debt problem, Moore knows who to blame. "The real culprits are Speaker of the House Nancy Pelosi and Senate Majority Leader Harry Reid. " The article is one of the many "It's their fault" pieces that come out of both sides of the political spectrum. All these arguments are backed with facts on who was in charge when and numerous facts on the debt. Both sides reach opposite conclusions with the same data set; how surprising. A Taste of France. A Touch of France. A couple of days ago I went out for one of my regular bicycle rides. 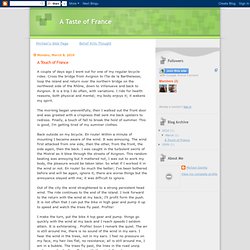 Cross the bridge from Avignon to l'île de la Barthelasse; loop the island and return over the northern bridge on the northwest side of the Rhône, down to Villenueve and back to Avignon. It is a trip I do often, with variations. I ride for health reasons, both physical and mental; my body enjoys it; it wakens my spirit. The morning began uneventfully, then I walked out the front door and was greeted with a crispness that sent me back upstairs to redress. Finally, a touch of fall to break the hold of summer. A Taste of France. I remember the incident. 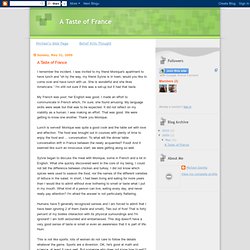 I was invited to my friend Monique's apartment to have lunch and “oh by the way, my friend Sylvie is in town, would you like to come over and have lunch with us. She is wonderful and she likes Americans.” I'm still not sure if this was a set-up but it had that taste. My French was poor; her English was good. I made an effort to communicate in French which, I'm sure, she found amusing. Lunch is served! Sylvie began to discuss the meal with Monique, some in French and a lot in English.