The World Wide Web's inventor warns it's in peril on 28th anniversary. Technology, entertainment merge on day one... 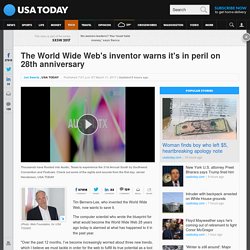 Thousands have flooded into Austin, Texas to experience the 31st Annual South by Southwest Convention and Festivals. Check out some of the sights and sounds from the first day. Jarrad Henderson, USA TODAY Tim Berners-Lee, who invented the World Wide Web, now wants to save it. The computer scientist who wrote the blueprint for what would become the World Wide Web 28 years ago today is alarmed at what has happened to it in the past year. "Over the past 12 months, I’ve become increasingly worried about three new trends, which I believe we must tackle in order for the web to fulfill its true potential as a tool which serves all of humanity," he said in a statement issued from London.

"Even in countries where we believe governments have citizens’ best interests at heart, watching everyone, all the time is simply going too far," he said, in an allusion to WikiLeaks' disclosure of what documents claim is a vast CIA surveillance operation. A Shift in Reality. I couldn't figure out why we came to be at farm 2 and when I asked Jack, "Why are we here? 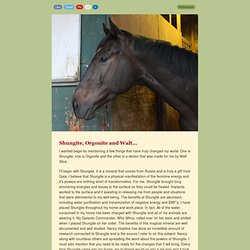 I don't feel connected like we were at the other farm. "__ Jack answered "We are anchoring the space between space so Gaia can continue to grow, evolve and increase in frequency. " What??? Big sigh from Jack... "We are holding the space between realities because realities are shifting and changing. I thought you were semi retired? "I am. I had noticed that Jack has been very affectionate since we moved to farm 2. "Because this area is classified as 'in between space', animals will frequently not be seen in the physical realm. Jack again sighed as he felt my next question forming.

Universal Court - Home. Personality Quiz. Tom Kenyon ~ Escalation of Chaotic Nodes and The Dismantling of 3-D Reality. Due to time-acceleration and cosmic forces far beyond your control you are in the midst of a crescendo of interlocking Chaotic Nodes. 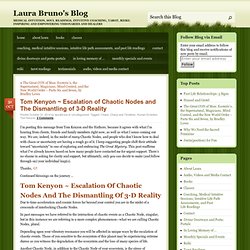 In past messages we have referred to the interaction of chaotic events as a Chaotic Node, singular, but in this instance we are referring to a more complex phenomenon—what we are calling Chaotic Nodes, plural. Depending upon your vibratory resonance you will be affected in unique ways by the escalation of chaotic events. Those of you sensitive to the ecosystem of this planet may be experiencing extreme duress as you witness the degradation of the ecosystem and the loss of many species of life. Another Chaotic Node, in addition to the Chaotic Node of your ecosystem, is the stress of interpersonal communications. This is a very complex situation, and it is partly due to the shifts in magnetic fields upon your planet, making short-term memory and cognitive sequencing difficult during energetic shifts—and these energetic shifts are accelerating.

Ten of Swords. Sometimes I dream of Tarot Cards, and this past week as far as Tarot Dreams go, I’ve seen nothing but the Ten of Swords. 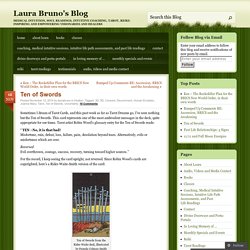 This card represents one of the most ambivalent messages in the deck, quite appropriate for our times. Tarot artist Robin Wood’s glossary entry for the Ten of Swords reads: “ TEN –No, it is that bad! Misfortune, ruin, defeat, loss, failure, pain, desolation beyond tears. Alternatively, evils or misfortunes which are over. Reversed Evil overthrown, courage, success, recovery, turning toward higher sources.” Accuracy of Self-Knowledge. How pathetically scanty my self-knowledge is compared with, say, my knowledge of my room. 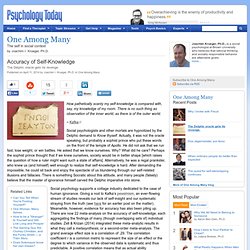 There is no such thing as observation of the inner world, as there is of the outer world. ~ Kafka Social psychologists and other mortals are hypnotized by the Delphic demand to Know thyself. Actually, it was not the oracle speaking, but probably a sophist prince who put these words on the front of the temple of Apollo. He did not ask that we run fast, lose weight, or win battles. Social psychology supports a cottage industry dedicated to the case of human ignorance.

What to make of a correlation of .3? Yet, many people think the accuracy correlation should be higher. 50 Questions That Will Free Your Mind. For Men. 75 Affirmations for Personal Development. Affirmations are one way to develop new beliefs that can eventually become second-nature. 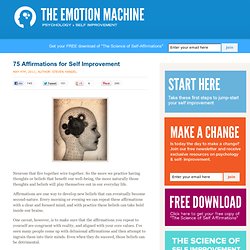 Every morning or evening we can repeat these affirmations with a clear and focused mind, and with practice these beliefs can take hold inside our brains. One caveat, however, is to make sure that the affirmations you repeat to yourself are congruent with reality, and aligned with your core values. I’ve seen many people come up with delusional affirmations and then attempt to ingrain them into their minds. Even when they do succeed, those beliefs can be detrimental. Please be aware of the meaning and intention behind the affirmation before you decide to “program it” into your mind.

The following is just a list of suggestions on some of the affirmations you may want to practice. I recommend only practicing 1 or 2 affirmations at a time. 1. 2. 3.