What can we do to change the world?

The George Washington University. He Named Me Malala: Education Resources - National Geographic Society. When 11-year-old blogger Malala Yousafzai began detailing her experiences in the Swat Valley of Pakistan for the BBC, she had no idea what momentous changes were coming in her life. 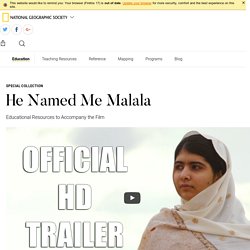 Her father, Ziauddin, a school founder and dedicated teacher, was outspoken in his belief that girls had a right to an education. As they continued to speak out against restrictions imposed by extremists, Ziauddin received constant death threats. But it was Malala who was almost killed, shot in the head by a gunman on her way home from school. Instead of being cowed by this horrific attack, Malala began to use the international attention she attracted to advocate for the cause of girls’ education worldwide.

At the age of 17, Malala became the youngest person to receive the Nobel Peace Prize. I Am Malala: The Girl Who Stood Up for Education and Was Shot by the Taliban - Malala Yousafzai - böcker(9780316322423) John Lennon - Imagine HD. Pay it forward: free downloadable lesson. A new free downloadable lesson about the concept of ‘pay it forward’, incorporating reading, speaking, video, grammar and writing. 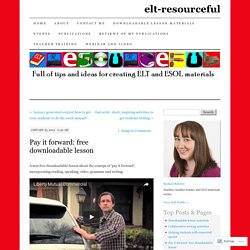 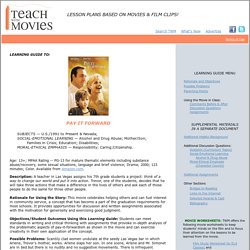 At the end of the movie, tell students that there is a Pay It Forward Foundation with a web-site showing instances of paying it forward. Pay It Forward - Trailer. Teen's invention makes water out of thin air. Teenager Save the World's Oceans Claims His Invention Could Clean up the Seas in just five years. - "Young people have power! Our voices are powerful" 16 year old Xiuhtezcatl Martinez addresses Presidential candidates.