Banana condensed milk cake with condensed milk frosting. My kids have become accustomed to finding brownies or cake or cookies of some kind in the kitchen for snacks, but they are fickle creatures and if offered the same thing too many times, they’ll decide that perhaps they aren’t that hungry after all and food ends up in the rubbish bin. 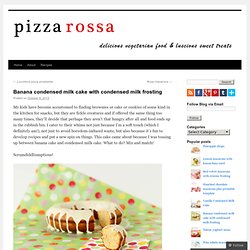 I cater to their whims not just because I’m a soft touch (which I definitely am!) , not just to avoid boredom-induced waste, but also because it’s fun to develop recipes and put a new spin on things. This cake came about because I was tossing up between banana cake and condensed milk cake. What to do? Mix and match! Scrumdiddliumptious! Biscoff Banana Bread. Friday, January 4, 2013 Biscoff Banana Bread How cute are these mini paper loaf pans? 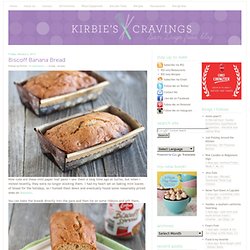 I saw them a long time ago at Surfas, but when I visited recently, they were no longer stocking them. I had my heart set on baking mini loaves of bread for the holidays, so I hunted them down and eventually found some reasonably priced ones on Amazon. You can bake the breads directly into the pans and then tie on some ribbons and gift them. Biscoff banana bread has been on my to-do list. The actual bread doesn’t have a very strong Biscoff taste, which didn’t surprise me too much. Dulce De Leche and Banana Cream Cheese Cake. I made this cake using all the leftovers ingredients I have in the fridge. 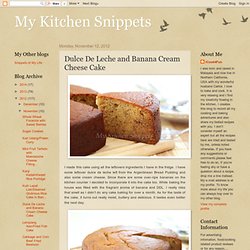 I have some leftover dulce de leche left from the Argentinean Bread Pudding and also some cream cheese. Since there are some over-ripe bananas on the kitchen counter I decided to incorporate it into the cake too. While baking the house was filled with the fragrant aroma of banana and DDL. I really miss that smell as I didn’t do any cake baking for over a month. As for the taste of the cake, it turns out really moist, buttery and delicious. 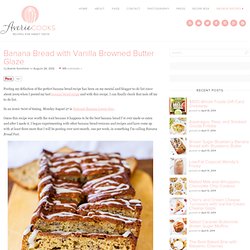 In an ironic twist of timing, Monday August 27 is National Banana Lovers Day. Guess this recipe was worth the wait because it happens to be the best banana bread I’ve ever made or eaten and after I made it, I began experimenting with other banana bread versions and recipes and have come up with at least three more that I will be posting over next month, one per week, in something I’m calling Banana Bread Fest. If you’re interested in why I am calling this bread the best ever, feel free to read on; it’s a pretty wordy post. 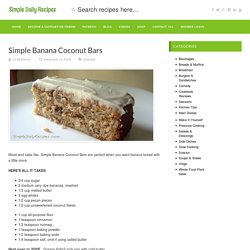 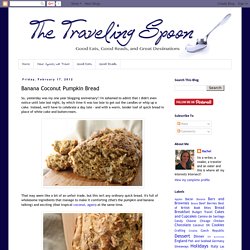 I'm ashamed to admit that I didn't even notice until late last night, by which time it was too late to get out the candles or whip up a cake. Instead, we'll have to celebrate a day late - and with a warm, tender loaf of quick bread in place of white cake and buttercream. That may seem like a bit of an unfair trade, but this isn't any ordinary quick bread. It's full of wholesome ingredients that manage to make it comforting (that's the pumpkin and banana talking) and exciting (that tropical coconut, again) at the same time. There's a minimum of added sugar which means the natural flavors of the pumpkin, coconut, and banana can speak for themselves.