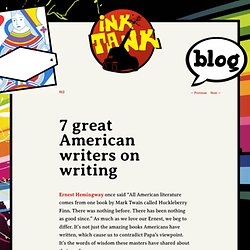 There was nothing before. There has been nothing as good since.” As much as we love our Ernest, we beg to differ. It’s not just the amazing books Americans have written, which cause us to contradict Papa’s viewpoint. It’s the words of wisdom these masters have shared about their craft. John Steinbeck Ernest Hemingway Elmore Leonard Toni Morrison Stephen King Henry Miller F. Designed by the awesomely talented Chris Ritter. Author Quote Posters. Being around a successful author would surely be exhausting and inspiring in equal amounts. 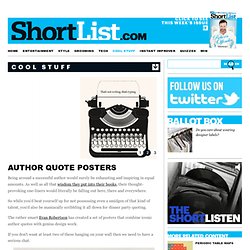 As well as all that wisdom they put into their books, their thought-provoking one-liners would literally be falling out here, there and everywhere. So while you'd beat yourself up for not possessing even a smidgen of that kind of talent, you'd also be maniacally scribbling it all down for dinner party quoting. The rather smart Evan Robertson has created a set of posters that combine iconic author quotes with genius design work. If you don't want at least two of these hanging on your wall then we need to have a serious chat. Tags: books, Design, Posters. - StumbleUpon. "If you find yourself in a fair fight, your tactics suck" - StumbleUpon. - StumbleUpon.

Popular quotes. Author Shel Silverstein Quote Draw A Crazy Picture. Pearls of Wisdom. In the long run the pessimist may be proved right, but the optimist has a better time on the trip. - Daniel L. 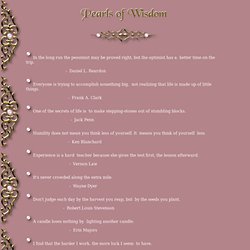 Reardon Everyone is trying to accomplish something big, not realizing that life is made up of little things. - Frank A. Clark One of the secrets of life is to make stepping-stones out of stumbling blocks. - Jack Penn Humility does not mean you think less of yourself. . - Ken Blanchard Experience is a hard teacher because she gives the test first, the lesson afterward. - Vernon Law It's never crowded along the extra mile. - Wayne Dyer Don't judge each day by the harvest you reap, but by the seeds you plant. - Robert Louis Stevenson A candle loses nothing by lighting another candle. - Erin Majors I find that the harder I work, the more luck I seem to have. - Thomas Jefferson No trumpets sound when the important decisions of our life are made.

. - Agnes DeMille You cannot shake hands with a clenched fist. - Indira Gandhi To live only for some future goal is shallow. 25 Most Memorable Quotes. 1"Let's roll. 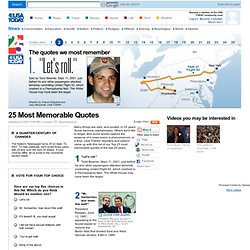 " Todd Beamer, Sept. 11, 2001, just before he and other passengers attacked terrorists controlling United Flight 93, which crashed in a Pennsylvania field. The White House may have been the target. President Reagan speaks in front of the Brandenburg Gate in West Berlin. By J. Scott Applewhite, AP 2"Mr. President Reagan, June 12, 1987, appealing to the Soviet leader to remove the Berlin Wall that divided East and West German sectors. Defense attorney Johnnie Cochran Jr. holds a pair of gloves at the O.J. 3"If it doesn't fit, you must acquit. " Defense attorney Johnnie Cochran, Sept. 27, 1995, arguing that a glove used as murder evidence in the O.J. President Clinton denies having had an improper relationship with Monica Lewinsky. 4"I did not have sexual relations with that woman, Miss Lewinsky. " President Clinton, Jan. 26, 1998, at a White House news conference. 5"You've got mail!