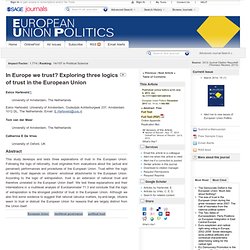 Email: E.Harteveld@uva.nl. Fostering a European identity is unlikely to be a successful method for increasing citizens’ trust in the EU. The financial crisis has rekindled debates about the legitimacy of the European Union and, in particular, whether citizens trust the EU. 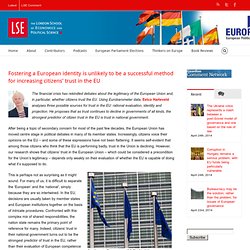 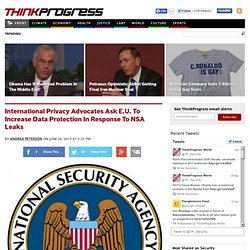 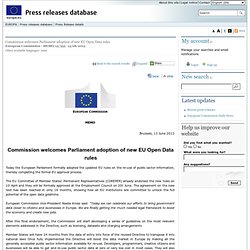 The EU Committee of Member States' Permanent Representatives (COREPER) already endorsed the new rules on 10 April and they will be formally approved at the Employment Council on 20t June. Info_on_eu_protests_of_5th_june. E-cigarettes: safer alternative to tobacco or potential health risk? E-cigarettes are often presented as a solution for smokers who want to quit their deadly habit but struggle to overcome their nicotine addiction, but how safe are they? 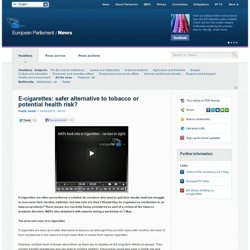 Should they be regulated as medication or as tobacco products? These issues are currently being considered as part of a review of the tobacco products directive. MEPs also debated it with experts during a workshop on 7 May. Debating Europe. Open Consultations - Your Voice in Europe - European Commission. Do you trust the European Union? A brief list of misused English terminology in EU publications. Fair Use in Europe. By P. 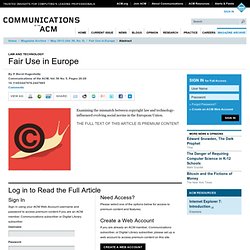 Bernt Hugenholtz Communications of the ACM, Vol. 56 No. 5, Pages 26-28 10.1145/2447976.2447985 Comments Examining the mismatch between copyright law and technology-influenced evolving social norms in the European Union. The full text of this article is premium content Need Access? Please select one of the options below for access to premium content and features. Create a Web Account If you are already an ACM member, Communications subscriber, or Digital Library subscriber, please set up a web account to access premium content on this site. Join the ACM Become a member to take full advantage of ACM's outstanding computing information resources, networking opportunities, and other benefits. EU Political Compass. (Greece to follow soon) While most of the old Eastern Bloc countries appear to have taken to the free market with the zeal of the recent convert, the simulaneous development of social freedoms has, in some instances been rather slower. 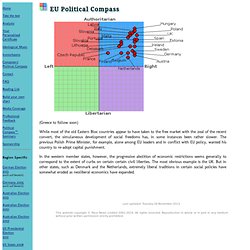 The previous Polish Prime Minister, for example, alone among EU leaders and in conflict with EU policy, wanted his country to re-adopt capital punishment. M.guardian.co.uk. Google's changes to its privacy policies have been criticised by 30 European data protection commissioners for resulting in 'uncontrolled' use of personal data without individual's clear consent, relating to their use of YouTube and Gmail. 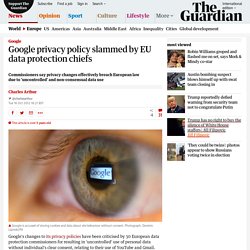 The commissioners told Google on Tuesday to give people more detailed control over personal data, and said the changes the search giant introduced in March amounted to breaking European data protection law, because the company was storing without consent cookies and data about sites people visited for between 18 months and two years.

The French data protection commissioner, the CNIL, led the inquiry and said that Google in effect let users pick and choose how their data was used among different services such as Gmail, Youtube and Google+ – a dramatic rewrite of the single privacy policy Google introduced in March. Google said it would consider its next steps, but said it had not broken the law. Confdetail385. Spiral. Long Live Incremental Research! By Bertrand Meyer June 13, 2011 Comments (9) [This article is a slightly updated version of a note I posted almost two years ago on my personal blog, bertrandmeyer.com. 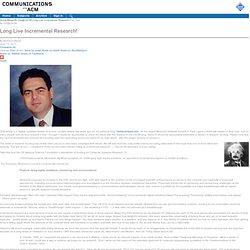 At the recent Microsoft Software Summit in Paris I gave a short talk based on that note, and so many people told me they enjoyed it that I thought it would be appropriate to share the ideas with the readers of the CACM blog, many of whom are presumably interested in issues of research funding. Please note that the most enthusiastic text extracts from funding agencies appearing below are meant to be read aloud, with the proper accents of passion.] The world of research funding has of late been prey to a new craze: paradigm-shift mania. We will only fund ten curly-haired cranky-sounding visionaries in the hope that one of them will invent relativity. Take this from the US National Science Foundation’s description of funding for Computer Systems Research [1]:

Protection of personal data - Justice. Whenever you open a bank account, join a social networking website or book a flight online, you hand over vital personal information such as your name, address, and credit card number. 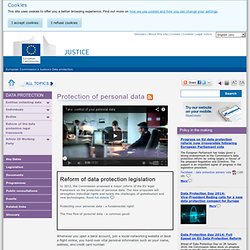