Negligent Corporate America Destroys Own Pension System. 'Retirement Heist': How Firms Trimmed Pensions As companies have been moving away from traditional pension plans, they have been shifting employees to new retirement plans, such as 401(k)s, that transfer the cost — and the risk — to workers. 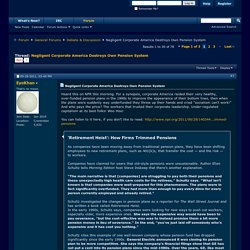 Companies have claimed for years that old-style pensions were unsustainable. Author Ellen Schultz tells Morning Edition host Steve Inskeep that there's another explanation. "The main narrative is that [companies] are struggling to pay both their pensions and these unexpectedly high health care costs for the retirees," Schultz says. "What isn't known is that companies were well-prepared for this phenomenon.

The Rightwing Attack on Public Employee Pensions. The rightwing argument that public employees bankrupted Detroit is incredible on its face. 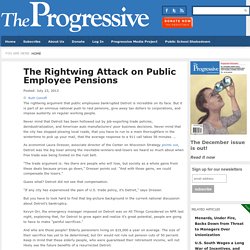 But it is part of an ominous national push to raid pensions, give away tax dollars to corporations, and impose austerity on regular working people. Never mind that Detroit has been hollowed out by job-exporting trade policies, deindustrialization, and American auto manufacturers' poor business decisions. Never mind that the city has stopped plowing local roads, that you have to run to a main thoroughfare in the wintertime to pick up your mail, that the average response to a 911 call takes 58 minutes ... As economist Laura Dresser, associate director of the Center on Wisconsin Strategy points out, Detroit was the big loser among the inevitable-winners-and-losers we heard so much about when free trade was being foisted on the rust belt.

"The trade argument is: Yes there are people who will lose, but society as a whole gains from these deals because prices go down," Dresser points out. Guess what? Bay Area Economist Outlines Solutions to California's Public Pension Woes: Forum. Deferred Promises: America's Pension Crisis. 1 Million American Pension Plans Could Be Insolvent In 10 Years.

The agency in charge of insuring private-sector pension plans is warning about big problems on the horizon. 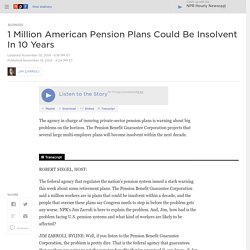 SIEGEL: Why, why should that be? ZARROLI: Well, a lot of them are not at risk and, in fact, most of them are doing OK. While Others Underfunded Pensions, Milwaukee Held Firm. Bill Averill, 62, has retired from the City of Milwaukee assessor's office and is collecting his pension. 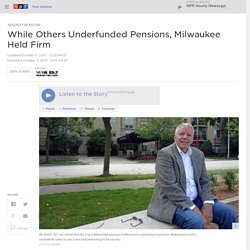 Milwaukee's fund is consistently rated as one of the best-performing in the country. Erin Toner/WUWM hide caption toggle caption Erin Toner/WUWM Bill Averill, 62, has retired from the City of Milwaukee assessor's office and is collecting his pension. 'Retirement Heist': How Firms Trimmed Pensions. Ellen Schultz is an award-winning investigative reporter for The Wall Street Journal. 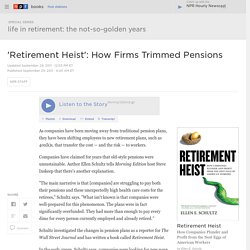 How Employers Raid Pension Plans. When it comes to threats to your retirement, there's one you may have overlooked: your employer. 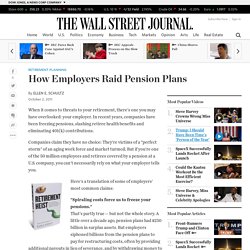 In recent years, companies have been freezing pensions, slashing retiree health benefits and eliminating 401(k) contributions. Companies claim they have no choice: They're victims of a "perfect storm" of an aging work force and market turmoil. But if you're one of the 50 million employees and retirees covered by a pension at a U.S. company, you can't necessarily rely on what your employer tells you. Here's a translation of some of employers' most common claims: "Spiraling costs force us to freeze your pensions. " When the market cratered in 2008, there was no surplus to cushion the blow, and today, pensions collectively are underfunded by 20%. With one big exception: Pensions for top executives continue to spiral, and account for much of the growing pension cost companies complain about. Another reason your pension plan might be underfunded: Your employer stopped contributing to it.