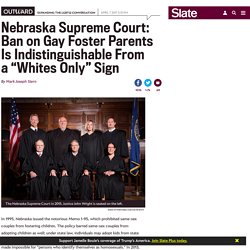 The policy barred same-sex couples from adopting children as well; under state law, individuals may adopt kids from state care only if they have first been licensed as foster parents—which Memo 1-95 made impossible for “persons who identify themselves as homosexuals.” In 2013, three same-sex couples, represented by the ACLU and Sullivan & Cromwell, filed a lawsuit alleging that the ban violated of their constitutional rights. They won in 2015 when a district court found that Memo 1-95 violated the 14th Amendment’s guarantees of equal protection and due process. Nebraska appealed to the state Supreme Court. Mark Joseph Stern is a writer for Slate. 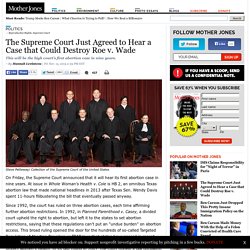 At issue in Whole Woman's Health v. Cole is HB 2, an omnibus Texas abortion law that made national headlines in 2013 after Texas Sen. Wendy Davis spent 11-hours filibustering the bill that eventually passed anyway. Since 1992, the court has ruled on three abortion cases, each time affirming further abortion restrictions. 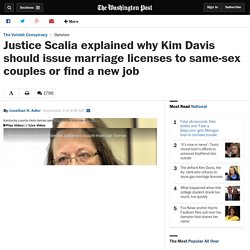 " (Hillary Thornton/WKYT-TV) Kim Davis, the clerk of Rowan County, Ky., refuses to issue marriage licenses to same-sex couples because she believes same-sex marriage is immoral. According to Davis, her religious convictions prevent her from issuing the license: “To issue a marriage license which conflicts with God’s definition of marriage, with my name affixed to the certificate, would violate my conscience.” California Consequences: What If High Court Bans Race Preferences in College Admissions? Almost lost amid the recent flurry of marquee U.S. 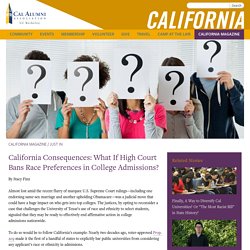 Supreme Court rulings—including one endorsing same-sex marriage and another upholding Obamacare—was a judicial move that could have a huge impact on who gets into top colleges. The justices, by opting to reconsider a case that challenges the University of Texas’s use of race and ethnicity to select students, signaled that they may be ready to effectively end affirmative action in college admissions nationwide. To do so would be to follow California’s example: Nearly two decades ago, voter-approved Prop. 209 made it the first of a handful of states to explicitly bar public universities from considering any applicant’s race or ethnicity in admissions. That clarifies how Texas wound up with a more “progressive” university admissions policy than California. It helps account for the fact that at UC Berkeley, proportional black and Latino enrollment dropped. Newman v. Piggie Park Enterprises, Inc. Newman v. 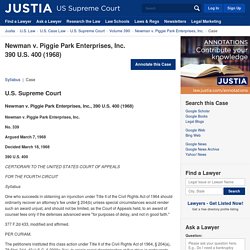 Piggie Park Enterprises, Inc., 390 U.S. 400 (1968) Newman v. Piggie Park Enterprises, Inc. No. 339 Argued March 7, 1968 Decided March 18, 1968 Syllabus One who succeeds in obtaining an injunction under Title II of the Civil Rights Act of 1964 should ordinarily recover an attorney's fee under § 204(b) unless special circumstances would render such an award unjust, and should not be limited, as the Court of Appeals held, to an award of counsel fees only if the defenses advanced were "for purposes of delay, and not in good faith. " 377 F.2d 433, modified and affirmed. How Hobby Lobby Undermined The Very Idea of a Corporation.

Justice Alito signs his oath card in the Justices Conference RoomKen Heinen/AP Here's one more reason to worry about the Supreme Court's Hobby Lobby decision, which allowed the arts and crafts chain to block insurance coverage of contraception for female employees because of the owners' religious objections: It could screw up corporate law. 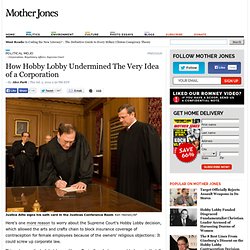 This gets complicated, but bear with us. Basically, what you need to know is that if you and some friends start a company that makes a lot of money, you'll be rich, but if it incurs a lot of debt and fails, you won't be left to pay its bills. The Supreme Court affirmed this arrangement in a 2001 case, Cedric Kushner Promotions vs. Don King: Justice Stevens: Supreme Court has Misinterpreted the Second Amendment.

The Washington Post has published an opinion piece from Justice John Paul Stevens in which he analyzes the history of the second amendment, and recent Supreme Court decisions to support his contention that the interpretation of the Second Amendment advanced by the NRA (and recently accepted by the courts) is contrary to the intent of the framers. 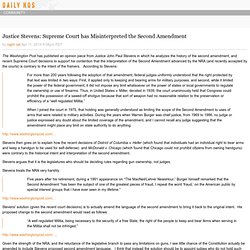 According to Stevens: For more than 200 years following the adoption of that amendment, federal judges uniformly understood that the right protected by that text was limited in two ways: First, it applied only to keeping and bearing arms for military purposes, and second, while it limited the power of the federal government, it did not impose any limit whatsoever on the power of states or local governments to regulate the ownership or use of firearms. Thus, in United States v. Official California Legislative Information. CAL. GOV. CODE § 54956 : California Code - Section 54956. Precedent for contraception coverage.