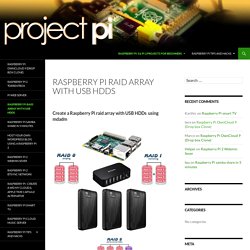 Once the Raid array is assembled, you could then create a Network attached files server or mini dna server. Expect examples and tips. Expect is an automation and testing tool used to automate a process that receives interactive commands. 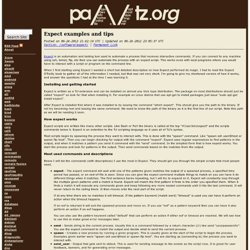 If you can connect to any machine using ssh, telnet, ftp, etc then you can automate the process with an expect script. This works even with local programs where you would have to interact with a script or program on the command line. When I first starting using Expect I wanted a short but detailed description on how Expect performed its magic.

I had to read the Expect O'Reilly book to gather all of the information I needed, but that was not very short. I'm going to give my shortened version of how it works, and answer the questions I had at the time I was learning it. Installing and getting started Expect is written as a Tcl extension and can be installed on almost any Unix type distribution. Expect - Expect - Home Page. Debian - How do I backup my Raspberry Pi. If you want to preserve all of the data, you will probably have to create a disk image. 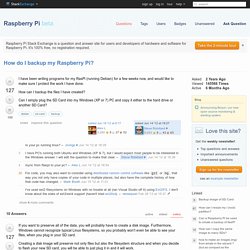 Furthermore, Windows cannot recognize typical Linux filesystems, so you probably won't even be able to see your files, when you plug in your SD card. Creating a disk image will preserve not only files but also the filesystem structure and when you decide to flash your new SD card, you will be able to just plug it in and it will work. On Linux, you can use the standard dd tool: dd if=/dev/sdx of=/path/to/image bs=1M Where /dev/sdx is your SD card. 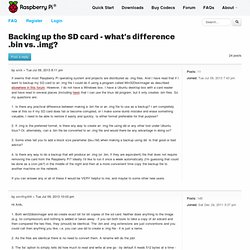 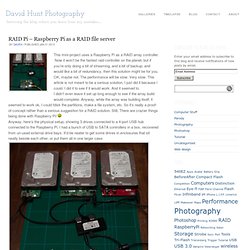 Now it won’t be the fastest raid controller on the planet, but if you’re only doing a bit of streaming, and a bit of backup, and would like a bit of redundancy, then this solution might be for you. OK, maybe not. The performance will be slow. Very slow. How to Turn a Raspberry Pi into a Low-Power Network Storage Device.

Mix together one Raspberry Pi and a sprinkle of cheap external hard drives and you have the recipe for an ultra-low-power and always-on network storage device. 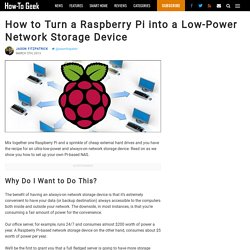 Read on as we show you how to set up your own Pi-based NAS. Why Do I Want to Do This? The benefit of having an always-on network storage device is that it’s extremely convenient to have your data (or backup destination) always accessible to the computers both inside and outside your network. The downside, in most instances, is that you’re consuming a fair amount of power for the convenience. 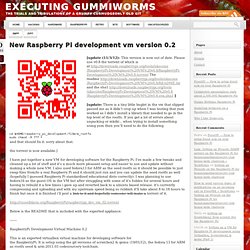 Please use v0.8 the torrent of which is at The readme and the sha1 ] [update: There is a tiny little buglet in the vm that slipped passed me as it didn't crop up when I was testing that yum worked as I didn't install a library that needed to go in the top level of the rootfs.

Chameleon. XBMC. Alltop - Top Raspberry Pi News. How to Build a Raspberry Pi File Server. Ldap. HOWTO: EncFS Encrypted Filesystem in Ubuntu and Fedora GNU/Linux ~ Moving to Freedom. I mentioned recently that I planned to keep using TrueCrypt in GNU/Linux since I had used it profitably in Windows, and that I also intended to keep using the container approach where you create a single file of a certain size and then mount it to get your virtual file system. I’m reevaluating my plan. I still like TrueCrypt and will likely keep using it, maybe by alternating DVD backups between it and my new intended: the EncFS Encrypted Filesystem.

(And of course GPG is always good for many crypto jobs, and will also be part of my security framework.) The drawback with my TrueCrypt method is having to create files of fixed sizes. You either have a lot of empty space tied up or you’re bursting at the seams and can’t expand a volume. After adding another 200GB drive to the slug the other day, I didn’t want to make more decisions about container sizes. Summary of my vague crypto knowledge Let me be clear that I’m no expert at this stuff. What to do? The EncFS Encrypted Filesystem. Get started with Fetchmail, Procmail and Dovecot. Having already shown you how to run your own web server using Apache, we'll now turn our attention to the most important application of networking: email. 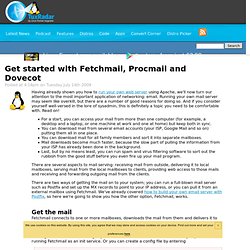 Running your own mail server may seem like overkill, but there are a number of good reasons for doing so. And if you consider yourself well-versed in the lore of sysadmin, this is definitely a topic you need to be comfortable with. Read on! There are several aspects to mail serving: receiving mail from outside, delivering it to local mailboxes, serving mail from the local mailboxes to clients, providing web access to those mails and receiving and forwarding outgoing mail from the clients. There are two ways of getting the mail on to your system; you can run a full-blown mail server such as Postfix and set up the MX records to point to your IP address, or you can pull it from an external mailbox using Fetchmail. How2SetUp a Raspberry Pi Windows file server - Simon The Pi Man. Ok this instruction sheet will allow you to setup a Raspberry Pi computer to act as a (NAS)Network Addressed Storage server so it will be possible for you to access files from any/all your windows PC's in your house using the Raspberry Pi to share the files on a disk drive attached to one of the usb ports on the Raspberry Pi. 1. 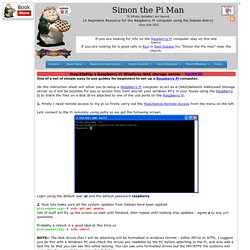 Firstly I need remote access to my pi so firstly carry out the How2SetUp Remote Access from the menu on the left. Lets connect to the Pi remotely using putty so we get the following screen. Login using the default user pi and the default password raspberry. 2. RPi Hub. Notice: The Raspberry Pi Wiki pages on this site is collaborative work - the Raspberry Pi Foundation is not responsible for content on these pages. 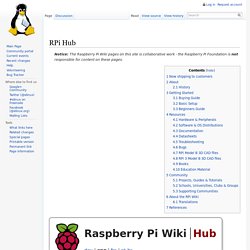 Now shipping to customers See the Buying Guide on how to order one, or visit the Raspberry Pi Foundation Home Page. The Raspberry Pi computer and specifications - Simon The Pi Man. The Raspberry Pi computer is hopefully going to regenerate the innovation and dynamism of the 1980's Home Computing era in 2012, by providing very cheap hardware with low power consumption. This will provide anyone with a few pounds/$ to spare, to create new innovative systems, whether embedded systems, home systems, or possibly the ultimate in shared processing such as "Peer to Peer Processing (P2PP)". The Raspberry Pi computer is a machine based on an ARM chip so has extremely low power consumption and should run on batteries. The machine is just a basic motherboard with a number of i/o ports including a TV out, sound out, usb ports, rj45 network port (on model B), hdmi, micro usb power, gpio interface and an sd card interface. Dovecot. Please see this mail about some reasons why this page needs to be updated.

Dovecot is a Mail Delivery Agent, written with security primarily in mind. It supports the major mailbox formats: mbox or Maildir. It is a simple and easy to install MDA. Ideensammlung - Was würdest du mit deinem Raspberry Pi machen? Raspberry Pi web server. I received an email from Fiach Reid who has built a python script which allows you to point a domain that’s registered with NameCheap to a dynamic IP address. Continue reading You’ve not read it wrong, I really am giving away a Raspberry Pi computer!

Now that the Model B has been upgraded to 512mb RAM and mine’s set to arrive this week, I have no use for the one that has been powering this site, so I’m giving it away! Continue reading Since first reading about the Raspberry Pi, I instantly started thinking of the endless possibilities for this tiny little handy PC. The next part of my project is to install an IMAP capable mail server, but here’s some of the other uses and projects I’ve found whilst clicking on the old ‘tinterweb! Continue reading The fundamental services required to turn your Raspberry Pi into a web server consist of Apache (the web server itself), PHP (scripting language) and MySQL (database server).