Charles Dickens, Britannica Library via SC DISCUS. A Victorian Christmas. For thousands of years people around the world have enjoyed midwinter festivals. 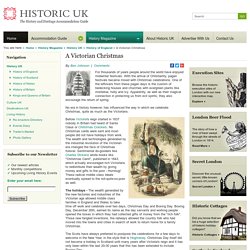 With the arrival of Christianity, pagan festivals became mixed with Christmas celebrations. One of the leftovers from these pagan days is the custom of bedecking houses and churches with evergreen plants like mistletoe, holly and ivy. Apparently, as well as their magical connection in protecting us from evil spirits, they also encourage the return of spring. No era in history however, has influenced the way in which we celebrate Christmas, quite as much as the Victorians.

Before Victoria's reign started in 1837 nobody in Britain had heard of Santa Claus or Christmas Crackers. A Victorian prison - source 3. Powys Victorian workhouse to welcome visitors. Image copyright Llanfyllin Dolydd Building Preservation Trust One of the best examples of a Victorian workhouse will open to the public after it received lottery money to create a history centre. 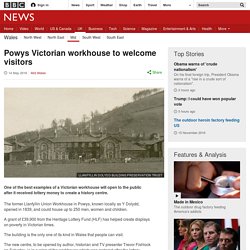 The former Llanfyllin Union Workhouse in Powys, known locally as Y Dolydd, opened in 1839, and could house up to 250 men, women and children. A grant of £39,900 from the Heritage Lottery Fund (HLF) has helped create displays on poverty in Victorian times. The building is the only one of its kind in Wales that people can visit. The new centre, to be opened by author, historian and TV presenter Trevor Fishlock on Saturday, is in a wing of the workhouse which was restored after the lottery funding was awarded to the Llanfyllin Dolydd Building Preservation Trust.

Primary History - Victorian Britain. Victorians Homework for kids - Woodlands. Who was King or Queen before Victoria? 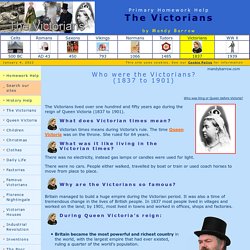 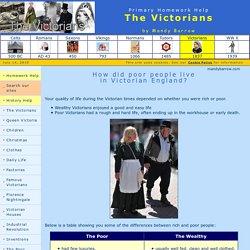 Wealthy Victorians enjoyed a good and easy life Poor Victorians had a rough and hard life, often ending up in the workhouse or early death. Below is a table showing you some of the differences between rich and poor people: What does being poor mean? Being poor means having little money or few possessions. The Victorian Period and Charles Dickens. Charles Dickens: 5 Facts on the Author & Some Gruesome Truths About His Victorian England. A small boy, barely 12 years old, sits in a rat-infested London warehouse, endlessly, wrapping, tying, and pasting labels onto jars of black boot polish. 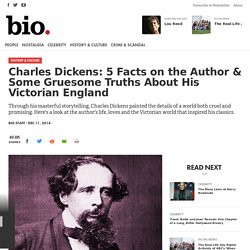 He has walked five miles to get to work, and after 10 hours, will walk that many more to get back to his rented room. He sees his family only on Sundays, when he visits London’s Marshalsea prison, where his father has been jailed for debt. Victorian Workhouses - The Workhouse. Before 1834, poor people were looked after by buying food and clothing from money collected from land owners and other wealthy people. 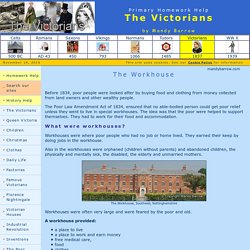 The Poor Law Amendment Act of 1834, ensured that no able-bodied person could get poor relief unless they went to live in special workhouses. The idea was that the poor were helped to support themselves. Victorian life. The quality of life depended on whether you were rich or poor. 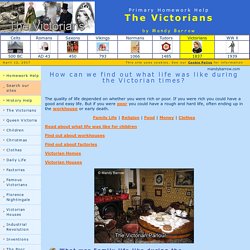 If you were rich you could have a good and easy life. But if you were poor you could have a rough and hard life, often ending up in the workhouse or early death. Understanding old British money - pounds, shillings and pence. Please note: We have mainly written about England, as that is the country within the UK where our students live. 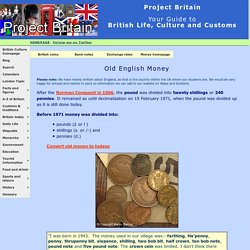 We would be very happy for schools and visitors to send us information we can add to our website on Wales and Scotland. After the Norman Conquest in 1066, the pound was divided into twenty shillings or 240 pennies. It remained so until decimalization on 15 February 1971, when the pound was divided up as it is still done today.