GO TenQuestionsForFakeNewsFINAL. Lesson Plan: How to Spot Fake News. The problem of fake news came to a dizzying head in 2016 when a man fired a shot in a family pizzeria as he “self-investigated” a false report of a child abuse ring led by top democrats. 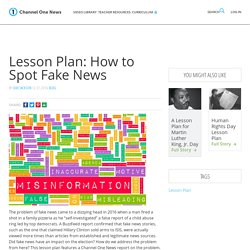 A BuzzFeed report confirmed that fake news stories, such as the one that claimed Hillary Clinton sold arms to ISIS, were actually viewed more times than articles from established and legitimate news sources. Did fake news have an impact on the election? Education statements. Comment choisir vos informations - Damon Brown. The Honest Truth about Fake News … and How Not to Fall for It (with Lesson Plan)

Did you hear that Pope Francis endorsed Donald Trump for president? 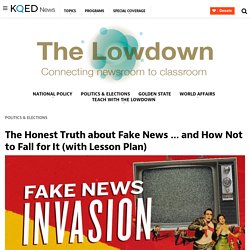 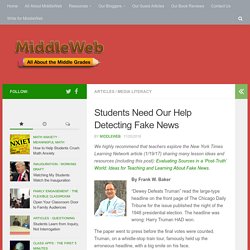 Baker “Dewey Defeats Truman” read the large-type headline on the front page of The Chicago Daily Tribune for the issue published the night of the 1948 presidential election. The headline was wrong: Harry Truman HAD won. The paper went to press before the final votes were counted. Truman, on a whistle-stop train tour, famously held up the erroneous headline, with a big smile on his face. How to outsmart fake news in your Facebook feed. It doesn't have to be this way. 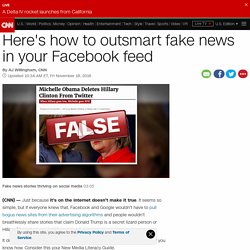 Fake news is actually really easy to spot -- if you know how. Consider this your New Media Literacy Guide. 1. Does the story come from a strange URL? Zimdars says sites with strange suffixes like ".co" or ".su," or that are hosted by third party platforms like WordPress should raise a red flag. Log In. If you are a close observer of The New York Times, as Alison Harvey is, you might have noticed a headline about Megyn Kelly, the Fox News anchor. 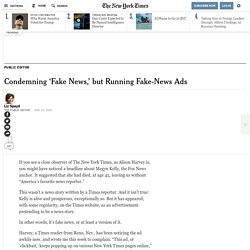 It suggested that she had died, at age 45, leaving us without “America’s favorite news reporter.” This wasn’t a news story written by a Times reporter. And it isn’t true: Kelly is alive and prosperous, exceptionally so. But it has appeared, with some regularity, on the Times website, as an advertisement pretending to be a news story. Log In. Consider that oldest of cons, the shell game. 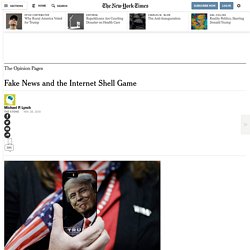 The con man presents three shells, one of which has a penny underneath. He moves the shells around and asks you to pick the shell with the penny. It looks easy, but isn’t. Using sleight of hand, he distracts you so that you can’t track the right shell and know where the penny is. But one can lack knowledge without having a false belief. We Tracked Down A Fake-News Creator In The Suburbs. Here's What We Learned : All Tech Considered. "The whole idea from the start was to build a site that could kind of infiltrate the echo chambers of the alt-right. 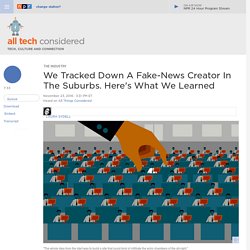