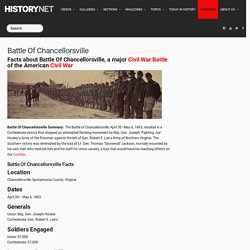 Anderson and Brigadier General Carnot Posey, who commanded a brigade in Anderson’s division. The trio and their staffs met to discuss the not unexpected news that a large body of Union troops had crossed the Rappahannock River and was threatening to outflank General Robert E. Lee’s Army of Northern Virginia. As the eight Chancellor women started to set the evening meal for the group of Confederate officers (all but one family slave had fled to the Yankees across the river), a messenger arrived informing them that the enemy was beginning to cross at United States Ford. Battle of Chancellorsville (April 30-May 6, 1863) Summary & Facts. Chancellorsville. Battle of Chancellorsville - American Civil War. My TV provider is not listed. 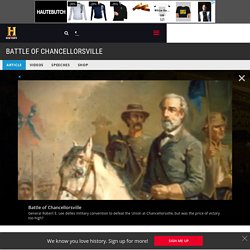 How often is new video added to the website? There will be new episodes and web exclusives added every day. How quickly does a new episode get added after it airs on TV? Who Made America? American Big Business A Virginia farmer invented a mechanical reaper, then harvested profits in the Midwest's exploding grain belt, innovating credit, service, and sales practices that became essential parts of American big business. 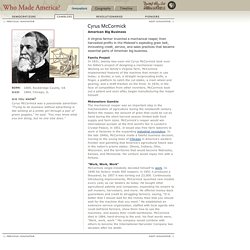 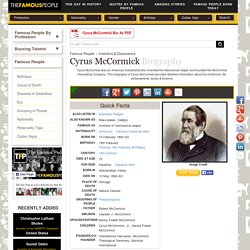 Born to an inventor father in Virginia, Cyrus received limited formal education but, displayed a knack for mechanics and soon learned the skills of his father, who used to conduct numerous experiments with farm machinery. When his father abandoned the work to build a reaper, Cyrus took over the project and after making several changes to the original design, in 1831, he was able to construct the first commercially successful mechanical reaper. However, over the next few decades, he faced the threat of competing inventors but was able to improve its mechanism, thus making his machine a success and maintaining his market position. 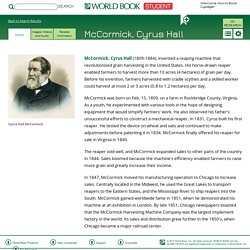 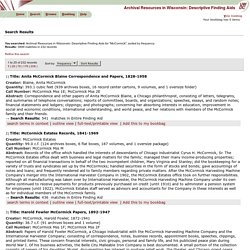 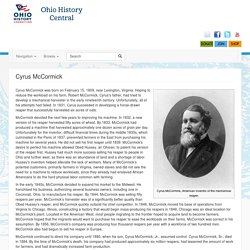 McCormick, Cyrus Hall. Great Inventors and Their Inventions by Frank P. Bachman. [142] THE chief occupation the world over is farming. 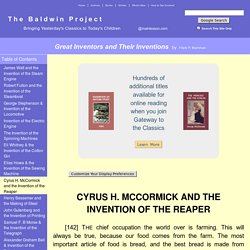 This will always be true, because our food comes from the farm. The most important article of food is bread, and the best bread is made from wheat. The amount of wheat raised depends largely on the amount that can be harvested. American industrialist and inventor. Cyrus McCormick and the mechanical reaper *** The McCormick reaper for kids: What crops are reaped? 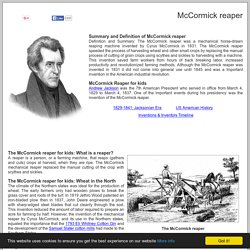 The grain crops that are reaped include wheat, rye, oats and maize. Cyrus McCormick Mechanical Reaper for kids: WheatThe success of wheat growing on the agriculture industry depended upon the ability quickly to harvest the crop. The process is as follows: Wheat must be allowed to stand until it is fully ripenedWhen ripe it had to be quickly reaped and stored away out of the reach of the wet rain which would ruin the cropEvery year at harvest time this led to a few weeks in which there was there was a huge demand for labor on the wheat farmsThe problem was that there was little labor to be had and the cost of the labor was high. The Reaper Revolution. Few people changed American agriculture more than Cyrus McCormick. 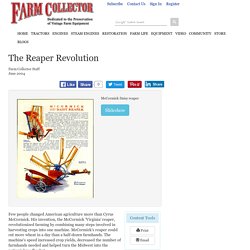