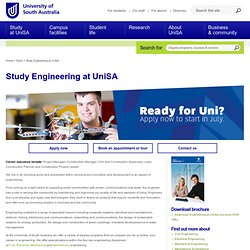 Find out more at World Top 100 for Engineering and Technology* *2013-14 Times Higher Education World University Rankings UniSA's Division of Information Technology, Engineering and the Environment is a world-leader in engineering teaching and research, boasting standards of academic excellence in engineering and technology that have been ranked amongst the top 100 universities in the world, the top six in Australia and the only university in South Australia in the 2013-14 Times Higher Education World University Rankings. These results follow recognition from Excellence in Research Australia for the Division's global vision and outstanding dedication to industry research with the achievement of a world-class or above rating for more than 86 per cent of our university's assessed research. 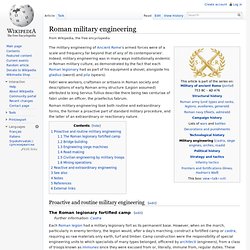 Indeed, military engineering was in many ways institutionally endemic in Roman military culture, as demonstrated by the fact that each Roman legionary had as part of his equipment a shovel, alongside his gladius (sword) and pila (spears). Military engineering. Military engineering is loosely defined as the art and practice of designing and building military works and maintaining lines of military transport and communications. 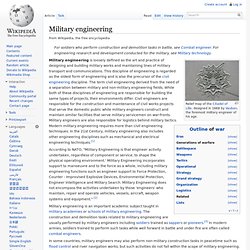 Military engineers are also responsible for logistics behind military tactics. Grandes écoles. The grandes écoles (literally in French "Grand School" or "Elite School") of France are higher education establishments outside the main framework of the French university system. 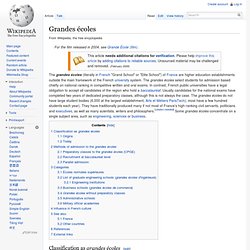 The grandes écoles select students for admission based chiefly on national ranking in competitive written and oral exams. In contrast, French public universities have a legal obligation to accept all candidates of the region who hold a baccalauréat. Usually candidates for the national exams have completed two years of dedicated preparatory classes, although this is not always the case. The grandes écoles do not have large student bodies (6,000 at the largest establishment, Arts et Métiers ParisTech); most have a few hundred students each year). Marc Isambard Brunel. Sir Marc Isambard Brunel, FRS FRSE (25 April 1769 – 12 December 1849) was a French-born engineer who settled in England. 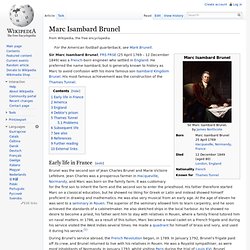 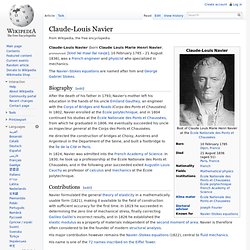 The Navier–Stokes equations are named after him and George Gabriel Stokes. Biography[edit] He directed the construction of bridges at Choisy, Asnières and Argenteuil in the Department of the Seine, and built a footbridge to the Île de la Cité in Paris. In 1824, Navier was admitted into the French Academy of Science. In 1830, he took up a professorship at the École Nationale des Ponts et Chaussées, and in the following year succeeded exiled Augustin Louis Cauchy as professor of calculus and mechanics at the École polytechnique. Contributions[edit] Navier formulated the general theory of elasticity in a mathematically usable form (1821), making it available to the field of construction with sufficient accuracy for the first time. His name is one of the 72 names inscribed on the Eiffel Tower. 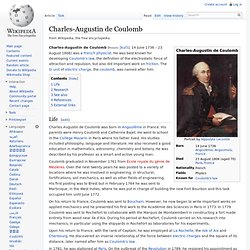 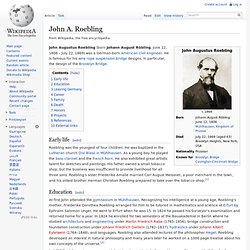 He is famous for his wire rope suspension bridge designs, in particular, the design of the Brooklyn Bridge. Early life[edit] Leonhard Euler. A statement attributed to Pierre-Simon Laplace expresses Euler's influence on mathematics: "Read Euler, read Euler, he is the master of us all. 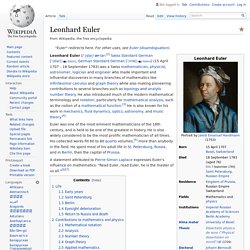 "[6][7] Life[edit] Early years[edit] Leonhard Euler was born on 15 April 1707, in Basel, Switzerland to Paul Euler, a pastor of the Reformed Church, and Marguerite née Brucker, a pastor's daughter. Euler's formal education started in Basel, where he was sent to live with his maternal grandmother. Saint Petersburg[edit] Around this time Johann Bernoulli's two sons, Daniel and Nicolaus, were working at the Imperial Russian Academy of Sciences in Saint Petersburg. 1957 Soviet Union stamp commemorating the 250th birthday of Euler. Euler arrived in Saint Petersburg on 17 May 1727. The Academy at Saint Petersburg, established by Peter the Great, was intended to improve education in Russia and to close the scientific gap with Western Europe. Isambard Kingdom Brunel. Isambard Kingdom Brunel, FRS (/ˈɪzəmbɑrd bruːˈnɛl/; 9 April 1806 – 15 September 1859), was an English mechanical and civil engineer who built dockyards, the Great Western Railway, a series of steamships including the first propeller-driven transatlantic steamship and numerous important bridges and tunnels. 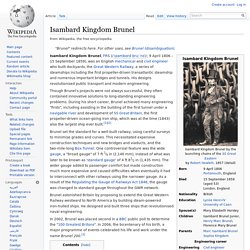 His designs revolutionised public transport and modern engineering. Though Brunel's projects were not always successful, they often contained innovative solutions to long-standing engineering problems. During his short career, Brunel achieved many engineering "firsts", including assisting in the building of the first tunnel under a navigable river and development of SS Great Britain, the first propeller-driven ocean-going iron ship, which was at the time (1843) also the largest ship ever built.[1][2] Brunel set the standard for a well-built railway, using careful surveys to minimise grades and curves. Bernoulli family. The Bernoullis (/bərˈnuːli/; Swiss [bɛʁˈnʊli];[1]) were a patrician family of merchants and scholars, originally from Antwerp, who settled in Basel, Switzerland. The name is sometimes misspelled Bernou-ill-i and mispronounced accordingly.[2] Leon Bernoulli was a doctor in Antwerp, which at that time was in the Spanish Netherlands.

Isaac Newton. Sir Isaac Newton PRS MP (/ˈnjuːtən/;[8] 25 December 1642 – 20 March 1726/7[1]) was an English physicist and mathematician (described in his own day as a "natural philosopher") who is widely recognised as one of the most influential scientists of all time and as a key figure in the scientific revolution. His book Philosophiæ Naturalis Principia Mathematica ("Mathematical Principles of Natural Philosophy"), first published in 1687, laid the foundations for classical mechanics. Newton made seminal contributions to optics, and he shares credit with Gottfried Leibniz for the development of calculus. Newton built the first practical reflecting telescope and developed a theory of colour based on the observation that a prism decomposes white light into the many colours of the visible spectrum.

Thomas Telford. Thomas Telford FRS, FRSE (1757–1834) was a Scottish civil engineer, architect and stonemason, and a noted road, bridge and canal builder. After establishing himself as an engineer of road and canal projects in Shropshire, he designed numerous infrastructure projects in his native Scotland, as well as harbours and tunnels. Such was his reputation as a prolific designer of highways and related bridges, he was dubbed The Colossus of Roads, and, reflecting his command of all types of civil engineering in the early 19th century, he was elected as the first President of the Institution of Civil Engineers, a post he retained for 14 years until his death.

Early career[edit] Robert Stephenson. Robert Stephenson FRS (16 October 1803 – 12 October 1859) was an early railway engineer. The only son of George Stephenson, he has been called the "Father of Railways" and built on the achievements of his father. Robert has been called the greatest engineer of the 19th century.[2] Eaton Hodgkinson. Eaton A. Hodgkinson FRS (26 February 1789 – 18 June 1861) was an English engineer, a pioneer of the application of mathematics to problems of structural design. Early life[edit] Hodgkinson was born in the village of Anderton, near Great Budworth, Cheshire to a farming family. George Stephenson. Samuel Smiles. William Fairbairn. Robert Hooke. Robert Hooke FRS (/hʊk/; 28 July [O.S. 18 July] 1635 – 3 March 1703) was an English natural philosopher, architect and polymath. His adult life comprised three distinct periods: as a scientific inquirer lacking money; achieving great wealth and standing through his reputation for hard work and scrupulous honesty following the great fire of 1666, but eventually becoming ill and party to jealous intellectual disputes.

Structural engineers must ensure their designs satisfy given design criteria, predicated on safety (e.g. structures must not collapse without due warning) or serviceability and performance (e.g. building sway must not cause discomfort to the occupants). Www.istructe.org - Home page - The Institution of Structural Engineers. What is Structural Engineering? Engineering. The American Engineers' Council for Professional Development (ECPD, the predecessor of ABET)[1] has defined "engineering" as: Iron Ring. Regulation and licensure in engineering. World Federation of Engineering Organizations. Institute of Industrial Engineers. ICE Home - Institution of Civil Engineers. Home.