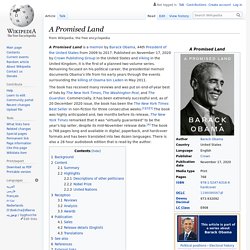 Published on November 17, 2020 by Crown Publishing Group in the United States and Viking in the United Kingdom, it is the first of a planned two-volume series. Remaining focused on his political career, the presidential memoir documents Obama's life from his early years through the events surrounding the killing of Osama bin Laden in May 2011. The book has received many reviews and was put on end-of-year best of lists by The New York Times, The Washington Post, and The Guardian.

Background[edit] Content[edit] Obama said in a tweet following the announcement of the publication of the book that he has aimed to "provide an honest accounting of my presidency, the forces we grapple with as a nation, and how we can heal our divisions and make democracy work for everybody".[10][11] Summary[edit] Highlights[edit] Fascism: A Warning.

Trumponomics: Inside the America First Plan to Revive Our Economy by Stephen Moore. Welcome to Trumponomics – Political Orphans. It took them a while, but you knew they’d eventually make their mark on our economy. 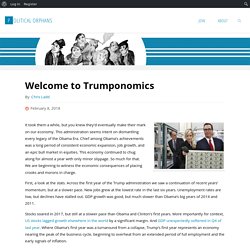 This administration seems intent on dismantling every legacy of the Obama Era. Chief among Obama’s achievements was a long period of consistent economic expansion, job growth, and an epic bull market in equities. This economy continued to chug along for almost a year with only minor slippage. So much for that. We are beginning to witness the economic consequences of placing crooks and morons in charge. First, a look at the stats. Stocks soared in 2017, but still at a slower pace than Obama and Clinton’s first years. How do you maintain healthy growth under these conditions?

Relieve some of the inflationary pressure by allowing interest rates to carefully tick upward. With tax revenues relatively high, this is an ideal moment to address any lingering debt concerns. Naturally, Trump’s Idiocrats aren’t doing these things. Obama is long gone and his legacy is more fragile than we realized. World on the Edge: How to Prevent Environmental and Economic Collapse by Lester R. Brown. The Relentless Revolution. The Relentless Revolution: A History of Capitalism is a 2010 book by Joyce Appleby. 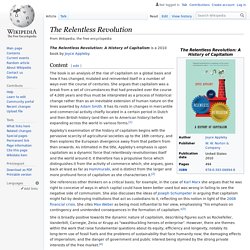 Content[edit] The book is an analysis of the rise of capitalism on a global basis and how it has changed, mutated and reinvented itself in a number of ways over the course of centuries. She argues that capitalism was a break from a set of circumstances that had prevailed over the course of 4,000 years and thus must be interpreted as a process of historical change rather than as an inevitable extension of human nature on the lines asserted by Adam Smith. It has its roots in changes in mercantile and commercial activity chiefly located in a certain period in Dutch and then British history (and then on to American history) before expanding across the world in various forms.[1] Appleby's examination of the history of capitalism begins with the pervasive scarcity of agricultural societies up to the 16th century, and then explores the European divergence away from that pattern from then onwards.

References[edit] Book review: House of Debt by Atif Mian and Amir Sufi. The Age Of Absurdity: Why Modern Life Makes It Hard To Be Happy by Michael Foley. Soul Without Shame: A Guide to Liberating Yourself from the Judge Within by Byron Brown. The Quest for the Shaman: Shape-Shifters, Sorcerers and Spirit-healers of Ancient Europe by Miranda Aldhouse-Green. Bill Gates Reads 50 Books Per Year. But Only These 6 Leadership Books Made His List of Recommendations. The Road Ahead (Gates book) We ask you, humbly: don't scroll away. 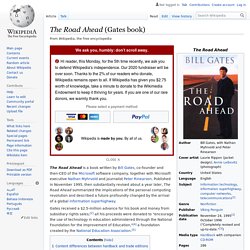 Hi reader, this Monday, for the 5th time recently, we ask you to defend Wikipedia's independence. Our 2020 fundraiser will be over soon. Thanks to the 2% of our readers who donate, Wikipedia remains open to all. If Wikipedia has given you worth of knowledge, take a minute to donate to the Wikimedia Endowment to keep it thriving for years. If you are one of our rare donors, we warmly thank you. The Road Ahead is a book written by Bill Gates, co-founder and then-CEO of the Microsoft software company, together with Microsoft executive Nathan Myhrvold and journalist Peter Rinearson. Both editions came with a CD-ROM that contained the text of the book and supplemental information.

One of Gates' coauthors, Nathan Myhrvold, was a computer scientist and Microsoft vice president who for a time oversaw Microsoft's research efforts and later co-founded Intellectual Ventures, an intellectual property company.