Posts to: this - item 7 - demise of #freespeech in EU. An opinion - freedom of opinion - literal AI ggl translation FROM DUTCH [laws & freespeech] A) no plan B) MAY a person, known victim (vulnerable) or group NO further damage or threat DELIVER as a result, the civil law provides for: prohibited ... o title 33: terror plans, organization ('purpose') o calls to hatred o calls to threaten person or property o Article 240b: for the protection of the abused child o extended with access to child pornography 'providing' (a o and artificial afflictions to be confused with real (b where a) is in line with target (1984, d66, discussion at 240b) and extension b) that is not, but very favorable against porn based on AI fabrications or based on existing ones images or 3d scans (eg cc footage, Avisa or ACC radar). this 3 items in Dutch two small files on Censorship ... 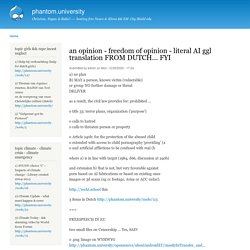 O .png Image on o my vcf People vcard - with Text on Censorship in (CIT) === eof You have reached the end of content for the Phantom online uni School of Justice Here's the Index. "certificates" with "browser" "block" quality html freespeech at DuckDuckGo. EU leaders agree on 55% greenhouse gas emissions reduction target. Acilo | E+ | Getty Images European Union leaders have agreed on a goal to cut greenhouse gas emissions by at least 55% by the year 2030 compared with 1990 levels. 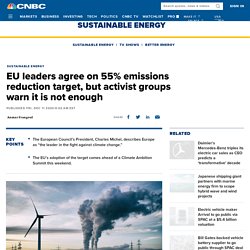 The previous target had been a reduction of at least 40% by 2030. The European Council’s President, Charles Michel, confirmed the news via Twitter on Friday morning, describing Europe as “the leader in the fight against climate change.” The new target was reached at a summit taking place in Brussels, Belgium. Ursula von der Leyen, who is president of the European Commission, the EU’s executive arm, said the target “puts us on a clear path towards climate neutrality in 2050.” The EU’s adoption of the 55% target comes ahead of a Climate Ambition Summit this weekend which will be co-hosted by the United Nations, the U.K. and France, in partnership with Italy and Chile. 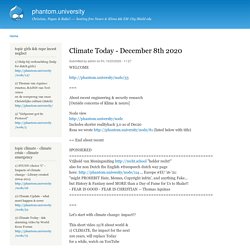 " also for non Dutch the English #freespeech dutch way page here: ... Europe #EU '16-'21: "might PROHIBIT Hate, Memes, Copyright infrin', and anything Fake... but History & Fantasy need MORE than a Day of Fame for Us to Shake!! Let's start with climate change: impact!? This short video 12/8 about world & 1) CLIMATE, the impact for the next 100 years, will replace Today for a while, watch on YouTube Source: World Economic Forum Time for sacrafice #EVs #electricheating NOW Here's Phantom's klima impact study '04-' Or go completely 2) NEURO With our 1 to 2 year neuroscience study PHANTOM's TOP FIVE PAGES 1. 2. climate update POPULAR news & what must be 4.