Holocaust Context. Night lesson guide. People of Earth Let Us All Unite - The Greatest Speech Ever Made - Charlie Chaplin. Visualizing Otherness I - Set 4 : Center for Holocaust & Genocide Studies : University of Minnesota. Night.pdf. Swastika. The swastika (also known as the gammadion cross, cross cramponnée, or manji) is a symbol that generally takes the form of an equilateral cross, with its four legs bent at 90 degrees (as a Chinese character: 卐 or 卍).[1][2] It was throughout the world considered a very important symbol. 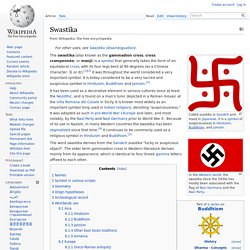 It is today considered to be a very sacred and auspicious symbol in Hinduism, Buddhism and Jainism.[3] It has been used as a decorative element in various cultures since at least the Neolithic, and is found on a man's tunic depicted in a Roman mosaic at the Villa Romana del Casale in Sicily. It is known most widely as an important symbol long used in Indian religions, denoting "auspiciousness.

" It was adopted as such in pre-World War I-Europe and later, and most notably, by the Nazi Party and Nazi Germany prior to World War II . The word swastika derives from the Sanskrit svastika "lucky or auspicious object". Names[edit] Other names for the symbol include: Symbol in various scripts[edit] Geometry[edit] Night (Wiesel) Video - Shmoop. Printable Maslow's Hierarchy of Needs Chart / Maslow's Pyramid Diagram.

Today’s post is a printable Maslow’s Hierarchy of Needs Chart. 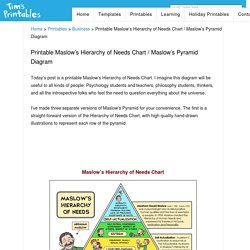 I imagine this diagram will be useful to all kinds of people: Psychology students and teachers, philosophy students, thinkers, and all the introspective folks who feel the need to question everything about the universe. I’ve made three separate versions of Maslow’s Pyramid for your convenience. The first is a straight-forward version of the Hierarchy of Needs Chart, with high quality hand-drawn illustrations to represent each row of the pyramid.

Maslow’s Hierarchy of Needs Chart And here is the diagram in black and white, for those of you who wish to save your color ink, or make coloring pages out of Maslow’s Pyramid. The third version below is a blank Maslow’s Pyramid Diagram. Blank Maslow’s Pyramid Diagram Abraham Maslow Biography Abraham Harold Maslow (April 1, 1908 – June 8, 1970) was a psychologist who studied positive human qualities and the lives of exemplary people. Related Printables. Reaching for the top of Maslow's Hierarchy of Needs Together - Liz and Ryan. Who knew that those psychology classes that I took in college and that summer of psychology research would come in so handy? 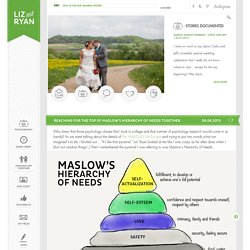 As we were talking about the details of The AMAZING Life Escape and trying to put into words what we imagined it to be, I blurted out… “It’s like that pyramid.” Lol. Ryan looked at me like I was crazy- as he often does when I blurt out random things! ;) Then I remembered the pyramid I was referring to was Maslow’s Hierarchy of Needs. The Maslow’s Hierarchy of Needs Pyramid has a base full of very basic needs: Food, Water, Air.

It has been a dream of ours to help people get closer to their self-actualization together as a couple! At the Escape, it is our goal to take care of everything so each couple can have a true getaway! It is so easy to get caught up in just maintaining and just doing what we have to do to complete that routine list of to-dos that fill our lives! There are currently 2 more openings for couples for the AMAZING Life Escape! About Utah: He rolls up his sleeve and votes. View 2 photos » Abe Katz shows the tattoo the Nazis stenciled on his forearm at Auschwitz when he was 16 years old. 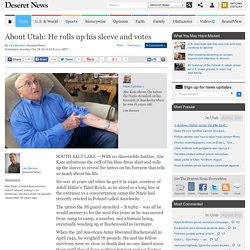 Lee Benson SOUTH SALT LAKE — With no discernible fanfare, Abe Katz unbuttons the cuff of his blue dress shirt and rolls up the sleeve to reveal the tattoo on his forearm that tells so much about his life. He was 16 years old when he got it in 1940, courtesy of Adolf Hitler’s Third Reich, as he stood in a long line at the entrance to a concentration camp the Nazis had recently erected in Poland called Auschwitz. The tattoo the SS guard stenciled – B 6282 – was all he would answer to for the next five years as he was moved from camp to camp, a number, not a human being, eventually winding up at Buchenwald in Germany. When the 3rd American Army liberated Buchenwald in April 1945, he weighed 78 pounds. Katz couldn’t go back to his native Poland because he would have been inducted into the Polish-Russian Army.