Ancient Greek Government. The government systems of ancient Greece were varied as the Greeks searched for the answers to such fundamental questions as who should rule and how? 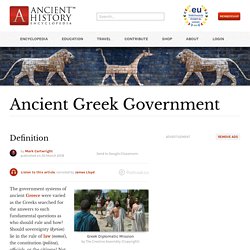 Should sovereignty (kyrion) lie in the rule of law (nomoi), the constitution (politea), officials, or the citizens? Not settling on a definitive answer to these questions, government in the ancient Greek world, therefore, took extraordinarily diverse forms and, across different city-states and over many centuries, political power could rest in the hands of a single individual, an elite or in every male citizen: democracy - widely regarded as the Greeks' greatest contribution to civilization. The four most common systems of Greek government were: Democracy - rule by the people (male citizens).Monarchy - rule by an individual who had inherited his role.Oligarchy - rule by a select group of individuals.Tyranny - rule by an individual who had seized power by unconstitutional means. Democracy Monarchy Tyranny Oligarchy Public Officials. Political system. Australian democracy: an overview · Museum of Australian Democracy at Old Parliament House.

Australia is a representative democracy. 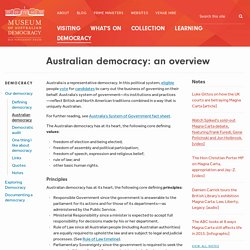 In this political system, eligible people vote for candidates to carry out the business of governing on their behalf. Australia’s system of government—its institutions and practices—reflect British and North American traditions combined in a way that is uniquely Australian. For further reading, see Australia’s System of Government fact sheet. The Australian democracy has at its heart, the following core defining values: Constitution Education Fund Australia. Friday, 7th April 2017 We thank the people who provided feedback on our birth of the Constitution article last week. 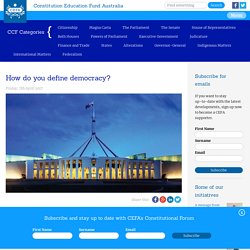 You have helped us immensely and your contributions will be incorporated. We continue writing content for the Australian Constitution Centre which examines the principles that are contained within our Constitution. This week we explore the important theme ‘democracy’. Political Identity and the Problem of Democratic Exclusion – Opinion – ABC Religion & Ethics. Liberal Democracy - Macquarie University. Constitutionally Australia is a religious country. What is the place of religion, especially Christianity, in a supposedly secular society? 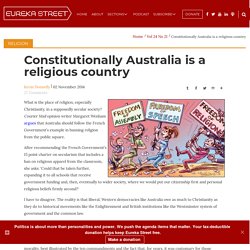 Courier Mail opinion writer Margaret Wenham argues that Australia should follow the French Government’s example in banning religion from the public square. After recommending the French Government’s 15 point charter on secularism that includes a ban on religious apparel from the classroom, she asks: 'Could that be taken further, expanding it to all schools that receive government funding and, then, eventually to wider society, where we would put our citizenship first and personal religious beliefs firmly second? ' I have to disagree. Theconversation. Political philosophy in the world: Liberalism and the end of the world as we know it - The Philosopher's Zone - ABC Radio National. The philosophers who will shape politics in Russia, China, Europe, France, and the US in 2018 from Confucius to Nick Land. McKinney, Texas Kevin Korenthal was once a registered Democrat, living in a California suburb. 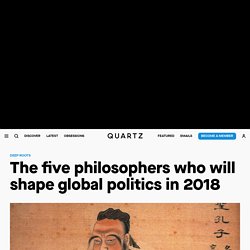 After struggling to keep his small public relations firm afloat for years, he decided to pack up his family and two dogs. Last year, Korenthal moved to McKinney, a conservative community in the outskirts of Dallas, Texas. By that point, he was a self-described Trump supporter. “California is a lost cause now. Usip. Aristotle’s Philosophy of Equality, Peace, & Democracy. Your complimentary articles You’ve read one of your four complimentary articles for this month. 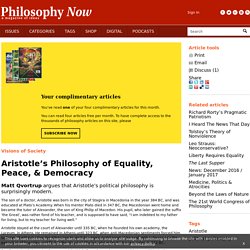 You can read four articles free per month. To have complete access to the thousands of philosophy articles on this site, please Visions of Society Matt Qvortrup argues that Aristotle’s political philosophy is surprisingly modern. Internet Encyclopedia of Philosophy. Plato (c. 427-347 B.C.E.) developed such distinct areas of philosophy as epistemology, metaphysics, ethics, and aesthetics. 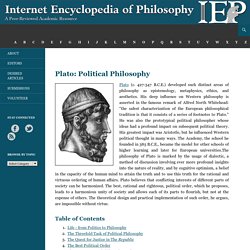 His deep influence on Western philosophy is asserted in the famous remark of Alfred North Whitehead: “the safest characterization of the European philosophical tradition is that it consists of a series of footnotes to Plato.” He was also the prototypical political philosopher whose ideas had a profound impact on subsequent political theory. His greatest impact was Aristotle, but he influenced Western political thought in many ways. The Philosopher’s Peace: Lasting or Final? Kant and Democratic Peace Theory. Since the beginning of political philosophy, peace has been considered to be a high if not one of the highest ends of political action, but anyone looking to account for what we mean by peace faces the fact that we seem to understand peace not on its own terms but only in relation to its opposite, war. 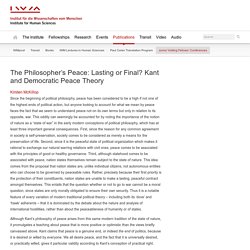 This oddity can seemingly be accounted for by noting the importance of the notion of nature as a “state of war” in the early modern conceptions of political philosophy, which has at least three important general consequences. First, since the reason for any common agreement in society is self-preservation, society comes to be considered as merely a means for the preservation of life. Second, since it is the peaceful state of political organization which makes it rational to exchange our natural warring relations with civil ones, peace comes to be associated with the principles of good or healthy governance. There are two kinds of argument supporting this position in Kant’s essay. Role of religion in conflict peacebuilding 0. People who have promoted world peace. A list of people who have contributed to peace. 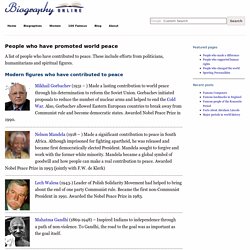 These include efforts from politicians, humanitarians and spiritual figures. Modern figures who have contributed to peace Mikhail Gorbachev (1931 – ) Made a lasting contribution to world peace through his determination to reform the Soviet Union. Gorbachev initiated proposals to reduce the number of nuclear arms and helped to end the Cold War. Also, Gorbachev allowed Eastern European countries to break away from Communist rule and become democratic states. Nelson Mandela (1918 – ) Made a significant contribution to peace in South Africa.

Lech Walesa (1943-) Leader of Polish Solidarity Movement had helped to bring about the end of one party Communist rule. Mahatma Gandhi (1869-1948) – Inspired Indians to independence through a path of non-violence. U Thant (1909 – 1974) was a Burmese diplomat and the third United Nations Secretary-General. Doesn't religion cause most of the conflict in the world? Rachel Woodlock (Islam) Religion is powerfully motivating and belligerent humans fight over it. 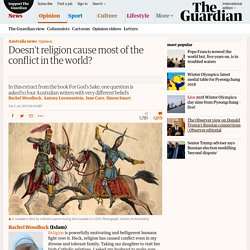 Religion Peace Conflict Journal. Religion, after all, is a powerful constituent of cultural norms and values, and because it addresses the most profound existential issues of human life (e.g., freedom and inevitability, fear and faith, security and insecurity, right and wrong, sacred and profane), religion is deeply implicated in individual and social conceptions of peace. Scott Appleby explains that the ambivalence of religion lies in the interpretation of the sacred, in imperfect human perception: “At any given moment any two religious actors, each possessed of unimpeachable devotion and integrity, might reach diametrically opposed conclusions about the will of God and the path to follow.”

In other words, religion can underwrite both conflict and peace on its own terms. It is an intervening variable that sometimes escalates, sometimes de-escalates conflict behavior. Religion & Politics. Religion and Political Theory. 1. The Standard View.