Understanding Race and Ethnicity. An Overview of Labeling Theory in Sociology. By Ashley Crossman Updated July 14, 2016. 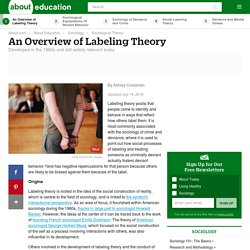 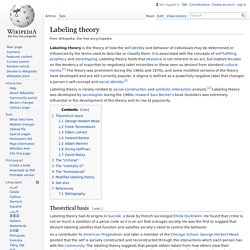 Howard Saul Becker's book Outsiders was extremely influential in the development of this theory and its rise to popularity. Theoretical basis[edit] This theoretically builds a subjective conception of the self, but as others intrude into the reality of that individual's life, this represents objective data which may require a re-evaluation of that conception depending on the authoritativeness of the others' judgment. Family and friends may judge differently from random strangers. More socially representative individuals such as police officers or judges may be able to make more globally respected judgments. Scapegoat theory sociology dictionary definition: scapegoat theory defined. (noun) “[Theory that s]uggests that the dominant group will displace its unfocused aggression onto a subordinate group” (OpenStax College 2012). 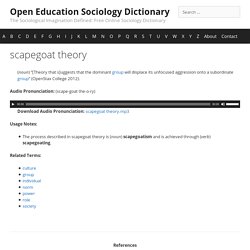 According to Bell-Fialkoff and others, the Assyrian Empire practiced ethnic cleansing when it forced millions of people in conquered lands to resettle between the ninth and seventh centuries B.C. 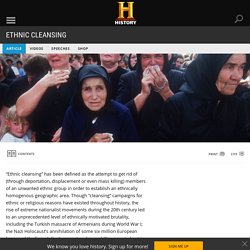 Groups such as the Babylonians, Greeks and Romans continued this practice, though not always on such a large scale and often to procure slave labor. During the Middle Ages, religion rather than ethnicity was a main source of persecution; episodes of religious cleansing tended to target Jews, often the largest minority in European countries. In Spain, which had a large population of Jews and of Muslims, Jews were expelled in 1492 and Muslims in 1502; those who remained were forced to convert to Christianity, though all Muslim converts (called Moriscos) were expelled in the early 17th century. Despite these examples, some scholars argue that ethnic cleansing in its strictest sense is a 20th-century phenomenon. Ethnic cleansing. The Practical Theorist. Several Marxist governments have committed genocide[1]. 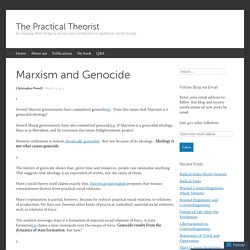 Does this mean that Marxism is a genocidal ideology? Several liberal governments have also committed genocide[2]. If Marxism is a genocidal ideology, then so is liberalism, and by extension the entire Enlightenment project. Western civilization is indeed chronically genocidal. Louis Wirth. Louis Wirth (August 28, 1897 – May 3, 1952) was a German born, Jewish-American sociologist. 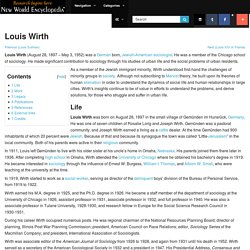 Minority Groups. Minority group. The term "minority group" often occurs alongside a discourse of civil rights and collective rights which gained prominence in the 20th century. 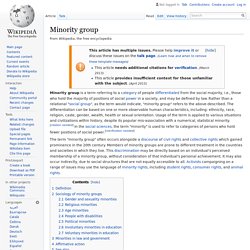 Members of minority groups are prone to different treatment in the countries and societies in which they live. This discrimination may be directly based on an individual's perceived membership of a minority group, without consideration of that individual's personal achievement. It may also occur indirectly, due to social structures that are not equally accessible to all. Activists campaigning on a range of issues may use the language of minority rights, including student rights, consumer rights, and animal rights. Definition[edit] Sociology of Race and Ethnicity. By Ashley Crossman Race and ethnicity are important concepts in the field of sociology and are ones that are studied a great deal. 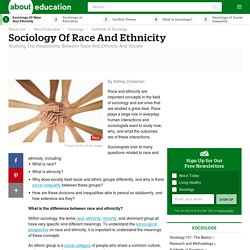 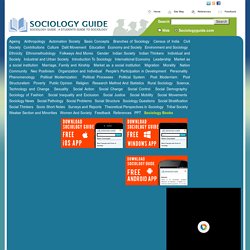 Sociological theories are necessary because without theory our understanding of social life would be very weak. Good theories help us to arrive at a deeper understanding of societies and to explain the social changes that affect us all. Sociological Theories of Prejudice and Racism. Home >> Ethnicity >> Sociological Theories of Prejudice and Racism Functionalist theory argues that for race and ethnic relations to be functional and thus contribute to the harmonious conduct and stability of society, racial and ethnic minorities must assimilate into that society. 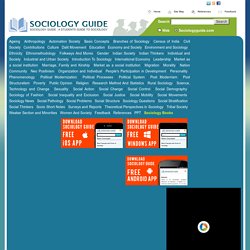 Assimilation is a process by which a minority becomes socially, economically, and culturally absorbed within the dominant society. The assimilation perspective assumes that to become fully fledged members of society, minority groups must adopt as much of the dominant society's culture as possible, particularly its language, mannerisms, and goals for success, and thus give up much of its own culture. The toxic spread of COVID-19 racism. We believe in the free flow of information. This work is licensed under a Creative Commons Attribution-No Derivatives 3.0 Australia (CC BY-ND 3.0 AU), so you can republish our articles for free, online or in print. All republished articles must be attributed in the following way and contain links to both the site and original article: “This article was first published on Pursuit. Read the original article.” Racism undermines COVID-19 Response. Since the beginning of the COVID-19 outbreak, there have been persistent reports of racist abuse and discrimination.

It’s an alarming trend that deeply affects individuals and undermines the community’s ability to respond effectively to the pandemic. As the virus first arrived in Australia, people of Chinese and other Asian backgrounds suffered discrimination, often from those fearful of contracting it. They were discriminatorily barred from restaurants, schools and other areas of public life.

They were subject to verbal abuse—and worse. More recently, frustration at the disruption, confinement and hardship so many people are facing has led to even more aggressive forms of racism. Throughout the crisis, I have joined politicians and other community leaders in publicly condemning these incidents of racism in the strongest possible terms. It is the responsibility of all Australians to stand up to racism, because racism only thrives when communities fail to say ‘No’. Why Australia is the world's most successful multicultural society - McKell Institute. Download the discussion paper here. The path to a multicultural Australia Over the past century, one of the most defining trends has been globalization and the increasing migration associated with it. Multiculturalism has become a defining feature in many of the world’s economies with Canada, the United Kingdom, the United States and South Africa examples of nations that have embraced a strong immigrant receiving tradition.

Similarly, Australia has a robust tradition as a country built upon migration that continues to this day. In 2016-17, Australia demonstrated a net overseas migration gain of 262,500 persons, a rise of 27.3 percent compared to 2015-16. Australian Multiculturalism: the roots of its success. Dr Sev Ozdowski OAMDirector, Equity and Diversity, University of Western Sydney Third International Conference on Human Rights Education: Promoting Change in Times of Transition and CrisisThe Jagiellonian University in Krakow, Poland, 6-10 December 2012 Download Word version of speech [DOC, 309 KB] (opens in new window) Abstract Despite its racist past, high and diverse immigration and enormous cultural and religious diversity, contemporary Australia is a highly successful and well functioning multicultural society.

The paper will analyse the reasons behind this success. The paper starts with an examination of Australia’s history from early settlement, with special focus on Australia’s social justice ethos and egalitarianism, its initial reliance on mother England for migrants, economy, governance, culture, its self-imposed regional isolation and tight immigration controls. Introduction Human rights are the basic norms that make a multicultural society possible. Our history - Multicultural affairs.

Celebrating Multiculturalism everyday. Between 16–18 February, the 22nd National Multicultural Festival continued its tradition of uniting our city in a celebration of culture, cuisine, language, music and dance, with more than 280,000 people attending over three days. The celebration of multiculturalism extends well beyond a weekend event in our national capital. Every day, Canberrans eat at one of the diverse range of restaurants ranging from Ethiopian to Peruvian, Afghani to Sri Lankan.

We come out in hordes to celebrate multicultural events – whether it’s the Canberra Nara Candle Festival or the Holi Mela/Colour Food and Fun Fiesta. All throughout our Capital are dance groups, sporting organisations and social clubs that keep cultures, traditions and communities alive – Canberrans have the highest participation rate in cultural and leisure activities in the nation. *21.8% – Statistic taken from the ABS 2016 Census **26.4% – Statistic taken from the ABS 2016 Census.

How culturally diverse are Canberra’s neighbourhoods? How culturally diverse is Canberra? It’s Harmony Week – a period to reflect on how multiculturalism has enhanced Australia’s social and cultural fabric – and realestate.com.au data analysts have taken a microscope to the nation’s neighbourhoods for a closer look. As the world closes its borders to combat the unprecedented COVID-19 health crisis, it’s a sobering time to embrace our nation’s diversity as we come together and support local communities.

MORE: Kingston penthouse sells for $3.5m Canberra estate sets new record with $8m sale According to realestate.com.au’s analysis of Census data, the majority of the nation’s population has Australian ancestry (40%), followed closely by English at 38%. ViewContent?readform&view=productsbytopic&Action=Expand&Num=5.