Spain, an economy which is becoming ever more globalised. Catalonia’s drive for independence and the emergence of global cities. Hundreds of pro-independence activist demonstrate during the general strike in Barcelona on October 3, 2017. 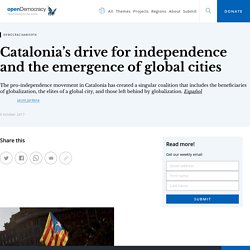 Miquel Llop/NurPhoto/Sipa USA/PA Images. All rights reserved. There are two large metropolitan areas in Spain: Barcelona and Madrid. While Madrid, with a population of 6.5 million, sits in third place in Europe, after London and Paris, Barcelona is in sixth place, with nearly 5 million. Reflections on Globalization, Spain, and the IMF. June 29, 2001 Eduardo Aninat Deputy Managing Director, International Monetary Fund General Meeting of ELKARGI San Sebastian, Spain, June 29, 2001 Español Thank you for inviting me to join your conference. 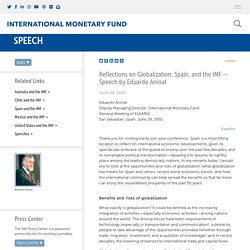 Spain is a most fitting location to reflect on international economic developments, given its spectacular embrace of the global economy over the past few decades, and its remarkable political transformation—allowing it to assume its rightful place among the leading democratic nations. 9789264111905 2 en. Spain declares climate emergency, signals move to renewables. Spain’s new government on Tuesday (21 January) declared a “climate emergency” and pledged to unveil a draft bill on transitioning to renewable energy within its first 100 days in office. 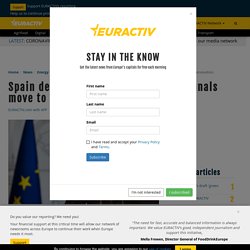 In a statement announced after the weekly cabinet meeting, the government committed to bringing a draft bill “to reduce greenhouse gas emissions with the objective of reaching climate neutrality by 2050” — effectively net-zero carbon emissions. Prime Minister Pedro Sánchez’s leftwing coalition government, which took office on 13 January, also committed to updating the national plan for tackling climate change. Climate change: More than a feeling: summers in Spain really are getting longer and hotter. It’s more than a feeling: there are figures to back it up. 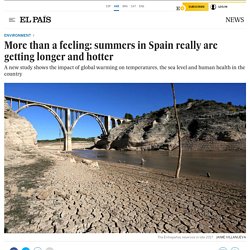 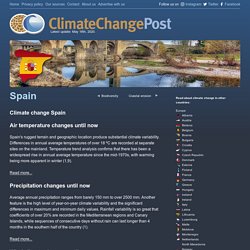 Discover the climate and geography of Spain. Weather and climate Best time to visit Spain's climate varies from temperate in the north to dry and hot in the south. 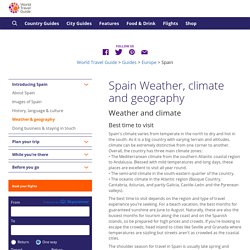 As it is a big country with varying terrain and altitudes, climate can be extremely distinctive from one corner to another. What is it that makes living in Italy so healthy? Italy is officially the world’s second healthiest country, narrowly beaten to the top spot by Spain. 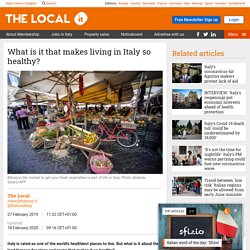 That's according to the Bloomberg Healthiest Country Index, which ranks 169 economies according to factors that contribute to overall health. There's no doubt that the legendary Mediterranean diet is a big factor in the ranking. But is living in Italy really better for your health? We put the question to our readers and were quickly inundated with stories of how a change in lifestyle after moving to Italy has helped people reach a healthy weight, feel more energetic, and even find relief from health problems.

Photo: AFP Almost everyone reported being at a healthier weight since making the move - despite many admitting to a weakness for pizza, pasta or gelato. “I lost three stone in four months and couldn’t put weight on no matter how much I ate,” said Peter Barber in Campania. Frederick Bee in Siracuse, Sicily, was one of many who reported accidental weight loss. 5 Health Lessons To Learn From Italians - Longevity LIVE. According to the Bloomberg Global Health Index, Italians are the healthiest people in the world (1). 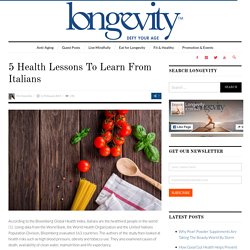 Using data from the World Bank, the World Health Organization and the United Nations Population Division, Bloomberg evaluated 163 countries. The authors of the study then looked at health risks such as high blood pressure, obesity and tobacco use. They also examined causes of death, availability of clean water, malnutrition and life expectancy. Using these factors, each country was then given a rating out of 100.

Attitudes towards health in Italy 2018. Basic Account Get to know the platform You only have access to basic statistics. 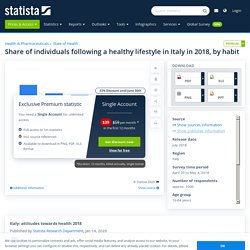 This statistic is not included in your account. Single Account. Italy Leads in Scientific Innovation on Earth and Beyond - South EU Summit. An Italian research project is growing plants in extremely hostile conditions, and may in the future be able to cultivate olive trees on Mars. 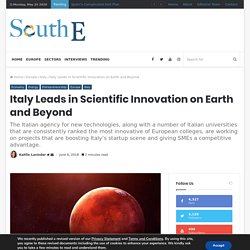 The European Country Becoming an Unexpected Hotbed of Innovation. When you think of markets abroad to study from an innovation perspective, you might think of the United Kingdom, China, or Germany. Italy declares own ports 'unsafe' to stop migrants arriving. In an unprecedented move, the Italian government has declared its seaports “unsafe” due to the coronavirus pandemic, and will not authorise the landing of migrant rescue boats until the end of the emergency. Italian innovation: Technology Revolution Italia-USA. Italy has a long presence of science and technology, from the Renaissance and the Roman era.

Through the centuries, Italy has advanced the scientific community that has produced many inventions and significant discoveries in biology, physics, chemistry, mathematics, astronomy and other sciences. Furthermore, the peninsula is Europe's second largest manufacturing economy and home to some of the region's most environmentally friendly production systems. The third largest exporter in Europe of flexible manufacturing technologies, including robotics, with $ 9.6 billion of Italian exports only to the United States. Only five countries worldwide with a trade surplus of production exceeding $ 100 billion. Italy - Immigration and foreign policy. Italy presents plan to accelerate expulsion of migrants. NPR Choice page. 18 Key Changes in France That Affect your Pocketbook and Lifestyle in 2020.

France - Daily life and social customs. ISDRS LeGallic. European Journal of Public Health. Sante mondiale en web cle4c7677 1. Social Media Monitoring in France. Facebook Facebook is the fourth most popular website in France, behind Google.com. Social media guide for France: main social media networks. Internet penetration in France is one of the highest in Europe with nearly 80% of people being connected. Social Media in France. France imposes 1-hour deadline on some social media censorship on pain of massive fines – Telecoms.com. A changing nation: the effects of globalisation on China. China is rapidly becoming the new champion of economic cooperation, trade and globalisation. China and Globalization. China and Globalization is a new website from Asia Society. Made in China – The new globalisation - Central Banking. The Silk Road International Association (SRIA) was inaugurated by former major policy-makers, financial experts and scholars from countries involved in the Belt and Road Initiative (BRI) in 2016 at the 13th Annual Conference of the International Finance Forum.