The Origins of the World: The Story of Creation in the Bible, the Qur'an, Epic of Gilgamesh, the Ginnungagap and Hesiod's Theogony. CREATION STORIES. Ancient Egyptian Creation Myths: Of Water and Gods. By Bob Brier, Ph.D., Long Island University Ancient Egypt’s Eight Water Gods For the Egyptians, in the beginning, there was water. 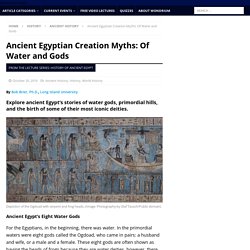 In the primordial waters were eight gods called the Ogdoad, who came in pairs: a husband and wife, or a male and a female. These eight gods are often shown as having the heads of frogs because they are water deities, however, there isn’t more known about them except their attributes. First, there was Hok and Hoket, and their attribute was formlessness.

This is a transcript from the video series History of Ancient Egypt. Next come Kuk and Kuket: darkness. Ra, The Creator God of Ancient Egypt. In a northwestern quarter of suburban Cairo, covered by 20 meters of earth, development and the lost echoes of history, is ancient Iwn, the city that witnessed the creation of the universe. 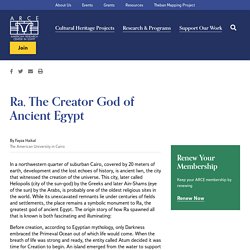 This city, later called Heliopolis (city of the sun-god) by the Greeks and later Ain-Shams (eye of the sun) by the Arabs, is probably one of the oldest religious sites in the world. While its unexcavated remnants lie under centuries of fields and settlements, the place remains a symbolic monument to Ra, the greatest god of ancient Egypt. The origin story of how Ra spawned all that is known is both fascinating and illuminating: Before creation, according to Egyptian mythology, only Darkness embraced the Primeval Ocean out of which life would come. Greek mythology origin story (article)

Creation myth. Symbolic narrative of how the world began and how people first came to inhabit it Creation myths develop in oral traditions and therefore typically have multiple versions;[3] found throughout human culture, they are the most common form of myth.[7] Definitions[edit] Creation myth definitions from modern references: 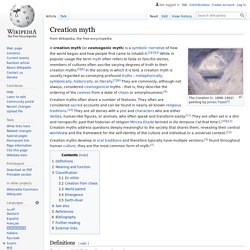 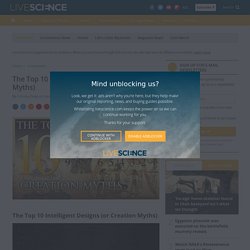 Unlike the theory of evolution which is taught at most schools as a fact-based science, "intelligent design" -- as argued by the plaintiffs -- was nothing more than a philosophy predicated on the Judeo-Christian belief that the logical sequences found in nature are not random happenings or surprising mutations, but deftly managed events created by a greater omniscient and omnipresent intelligence with a specific plan. The Creation of the Cosmos. The Norse creation myth or cosmogony (an account of the origins of the cosmos) is perhaps one of the richest in all of world literature. 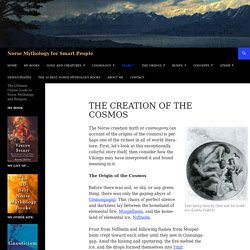 First, let’s look at this exceptionally colorful story itself, then consider how the Vikings may have interpreted it and found meaning in it. The Origin of the Cosmos Before there was soil, or sky, or any green thing, there was only the gaping abyss of Ginnungagap. Creation of the World in Norse Mythology. In Norse mythology, there are 9 worlds that are divided among three levels all held together by the world tree, Ygdrasil. 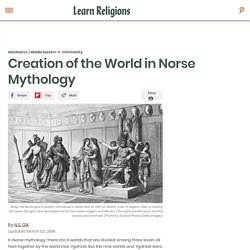 But the nine worlds and Ygdrasil were not there in the beginning. Upper level. Covenant as Creation Care. Wicca - HISTORY. Wicca is a modern-day, nature-based pagan religion. 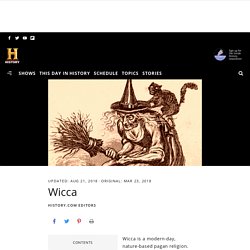 Though rituals and practices vary among people who identify as Wiccan, most observations include the festival celebrations of solstices and equinoxes, the honoring of a male god and a female goddess, and the incorporation of herbalism and other natural objects into rituals. Wiccans practice their religion according to an ethical code, and many believe in reincarnation. Wicca is considered a modern interpretation of pre-Christian traditions, though some involved claim a direct line to ancient practices. It may be practiced by individuals or members of groups (sometimes known as covens). Wicca also has some commonalities with Druidism in its environmental component, and is considered the inspiration of the goddess movement in spirituality.

Other Wiccan practices are atheist, pantheist, polytheist or respectful of gods and goddesses as archetypal symbols rather than as actual or supernatural beings. Pagans and Creation Stories - Pagan Creation Myths. Many religions, especially those of the Judeo-Christian variety, believe that the universe and everything in it was created by a single supreme being. 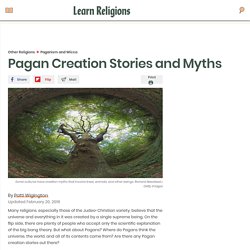 On the flip side, there are plenty of people who accept only the scientific explanation of the big bang theory. But what about Pagans? Story of Creation (part 1 of 2) God Created Everything So how did it all start? 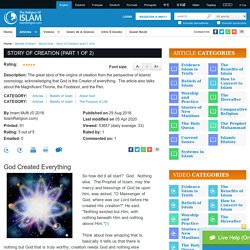 God. Nothing else. The Prophet of Islam, may the mercy and blessings of God be upon him, was asked, "O Messenger of God, where was our Lord before He created His creation? " He said: "Nothing existed but Him, with nothing beneath Him and nothing above Him. " Think about how amazing that is, basically it tells us that there is nothing but God that is truly worthy; creation needs God and nothing else because in the beginning there was God while there was nothing else. Religions 11 00667 v3. The origin of the universe - The world - GCSE Religious Studies Revision - WJEC - BBC Bitesize. Creation stories - continued - The existence of God - GCSE Religious Studies Revision - CCEA - BBC Bitesize. The Origins of Life: A Muslim View. Judaism - Myths. Creation and Cosmogony in the Bible. The Hebrew Bible commences with a majestic cosmological account of the genesis of the universe. 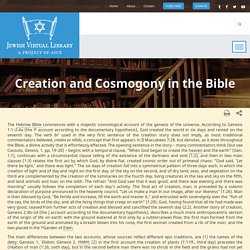 According to Genesis 1:1–2:4a (the P account according to the documentary hypothesis), God created the world in six days and rested on the seventh day. The verb brʾ used in the very first sentence of the creation story does not imply, as most traditional commentators believed, creatio ex nihilo, a concept that first appears in II Maccabees 7:28, but denotes, as it does throughout the Bible, a divine activity that is effortlessly effected.

Kaplan on Creation: An Explanation of Jewish Mission. D'var Torah. God as creator - Key beliefs in Judaism - GCSE Religious Studies Revision - Eduqas - BBC Bitesize. Traditional stories of creation from Australia's first people. What is Aboriginal Dreamtime? The Aborigines learned about their beginnings through their Dreamtime creation folklores that told of the momentous actions of the creators. The myths were the foundation of Aboriginal society and provided certainty about existence. The Australian aborigines believed that the land they occupied was once not in existence like it is today. It was free from form or life, vacuous – empty. They unquestionably believed that this was the way things once were because the ancestors had said so and they would never doubt their word. Popular Aboriginal Dreamtime Stories.

Aboriginal Dreamtime stories speak of events from the time of creation. These stories have been passed on from one generation to the next for thousands of years. Dreamtime stories are also preserved in our songs and dances. These stories give us understanding of the past and have helped us survive through the laws and morals that lay within these stories. If you’re a teacher or student looking for more educational articles, make sure to bookmark/save our Education Series link here. 1. 2. 3. 4. 5. 6. 7. 8. 9.

Understanding and respecting creation stories. Creation stories provide important information about culture, values, people, animals and the environment, and are passed down from generation to generation through storytelling. Sharing Aboriginal and Torres Strait Islander people creation stories should be done respectfully. The Creation Story – Historical and Contemporary Realities: Movement Towards Reconciliation. Indigenous peoples have their own versions of origin stories. These stories are in conflict with the western understandings of the world. Western science insists on the theory of Asian origins and that Bering Strait theory accounts for how Indigenous people came to exist in North America (Brownlie, 2009).

Indigenous people have their own versions of how they came to exist in North America. Indigenous people refer to North America as ‘Turtle Island.’ We can learn from Indigenous creation stories: Canadian bishops - BC Catholic - Multimedia Catholic News. Māori creation traditions. The Legend of New Zealand. Aboriginal spirituality changes and adapts. Aboriginal spirituality can not only be changed by other religions, for example Christianity, but also by the environment Aboriginal people live in. What is the 'Dreamtime' or the 'Dreaming'? English cannot express the 'Dreaming' 'Dreamtime' or 'Dreaming' has never been a direct translation of an Aboriginal word. Naji (Film) Kalbarri Aboriginal history. BBC - Religions - Christianity: Creationism and intelligent design. Creationism. 1. The Creation - Bible Story Summary and Study Guide.