A taste of Japan 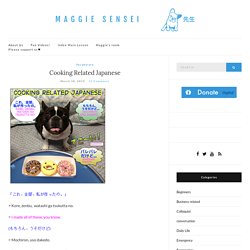 = Kore, zenbu, watashi ga tsukutta no. = I made all of these, you know. (もちろん、うそだけど) = Mochiron, uso dakedo. Japanese Food. A look at the Japanese lifestyle and customs. Customs surrounding eating differ extremely in different countries. 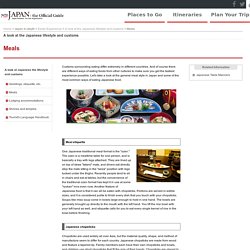 And of course there are different ways of eating foods from other cultures to make sure you get the tastiest experience possible. Let's take a look at the general meal style in Japan and some of the most common ways of eating Japanese food. Meal etiquette One Japanese traditional meal format is the "ozen. " The ozen is a mealtime table for one person, and is basically a tray with legs attached. Japanese chopsticks Chopsticks are used widely all over Asia, but the material quality, shape, and method of manufacture seem to differ for each country. Using the "oshibori" When you sit down at a restaurant, the first thing that a wait staff will bring to your table is an "oshibori. " Eating sushi Sushi restaurants are generally divided into two types, the "kaiten-zushi" restaurants and counter style sushi restaurants.

Japanese Table Manners. Tables and Seating Some restaurants in Japan have low tables and cushions on tatami floor instead of (or in addition to) Western style chairs and tables. 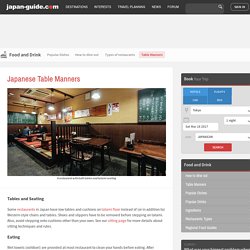 Shoes and slippers have to be removed before stepping on tatami. Also, avoid stepping onto cushions other than your own. See our sitting page for more details about sitting techniques and rules. Eating Wet towels (oshibori) are provided at most restaurant to clean your hands before eating. When eating from small bowls, it is correct manner to pick up the bowl with your hand and lead it close to your mouth when eating from it; however, larger types of dishes should generally not be picked up. Blowing your nose at the table, burping and audible munching are considered bad manners in Japan. 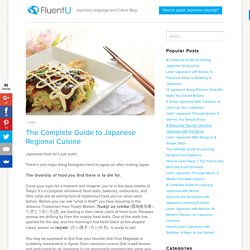 There’s one major thing foreigners tend to agree on after visiting Japan. The diversity of food you find there is to die for. Close your eyes for a moment and imagine: you’re in the busy streets of Tokyo. It’s a complete whirlwind: food stalls, bakeries, restaurants, and little cafes are all selling tons of mysterious food you’ve never seen before. Before you can ask “what is that?” You may be surprised to find that your favorite dish from Nagasaki is suddenly nonexistent in Kyoto. Now that you know chopstick etiquette and how to order without looking like a fool, it’s time to discover regional specialties or kyoudo ryouri (郷土料理 / きょうどりょうり) from across the nation!

Hokkaido (北海道 / ほっかいどう) Hokkaido is a northern prefecture that covers Japan’s second largest island. Ishikari Hot Pot – Ishikari Nabe (石狩鍋 / いしかりなべ) Named after the Ishikari-gawa River, Ishikari nabe is a miso-based hotpot filled with a generous amount of salmon, stewed vegetables, and tofu. Famous Japanese Foods Sorted by Prefecture. Since we’re getting ready to pop over to Japan to do some filming, I wanted to do some research on all the famous foods of every area in Japan. 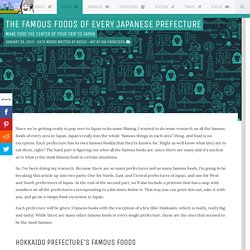 Japan’s really into the whole “famous things in each area” thing, and food is no exception. Each prefecture has its own famous food(s) that they’re known for. Might as well know what they are to eat them, right? The hard part is figuring out what all the famous foods are, since there are many and it’s unclear as to what is the most famous food in certain situations. So, I’ve been doing my research. Each prefecture will be given 3 famous foods with the exception of a few (like Hokkaido, which is really, really big and tasty). Regional Specialities - Japan National Tourism Organization.

Regional Specialities Japan’s diverse landscape stretches from the tropical south to the wintery highlands of the north, in which Pacific climates meet Siberian winds. 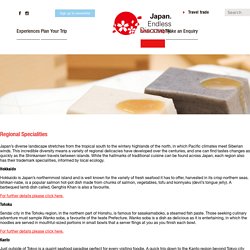 This incredible diversity means a variety of regional delicacies have developed over the centuries, and one can find tastes changes as quickly as the Shinkansen travels between islands. While the hallmarks of traditional cuisine can be found across Japan, each region also has their trademark specialities, informed by local ecology. Hokkaido Hokkaido is Japan’s northernmost island and is well known for the variety of fresh seafood it has to offer, harvested in its crisp northern seas. For further details please click here. Tohoku Sendai city in the Tohoku region, in the northern part of Honshu, is famous for sasakamaboko, a steamed fish paste. For further details please click here. 2017 Food Tour of Japan in Autumn - Journey to the East.

Where Food collides with Art….. 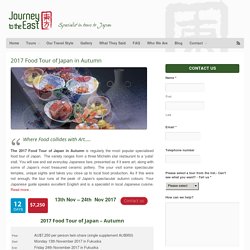 The 2017 Food Tour of Japan in Autumn is regularly the most popular specialised food tour of Japan. The variety ranges from a three Michelin star restaurant to a ‘yatai’ stall. You will see and eat everyday Japanese fare, presented as if it were art, along with some of Japan’s most treasured ceramic pottery. The your visit some spectacular temples, unique sights and takes you close up to local food production.

Gastronomic Adventure - Self Guided Adventure. Roll your own sushi, sample the delicacies of Nishiki food market, test the defences of Nijo Castle and wander through the gates at Fushimi Inari Shrine as you discover the “City of Ten Thousand Temples”. 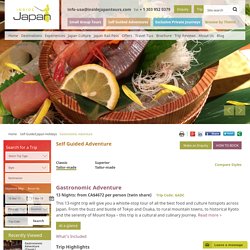 The express train will take you back through the mountains today to Kyoto. This city was the Imperial capital of Japan for more than 1,000 years and remains the beating cultural heart of the country to this day. On arrival you will have the afternoon free to explore the city – we suggest a visit Ginkaku-ji Temple, a stroll through Nishiki food market or a wander through the hundreds of vermillion torii gates at Fushimi Inari shrine. For dinner tonight we suggest visiting Tempura Endo Yasaka, one of Kyoto's most celebrated restaurants.

The restaurant is famous for its tempura dishes: lightly battered vegetables and seafood served piping hot with dipping sauce, salt or grated radish.