Physics For Idiots. There are 4 laws to thermodynamics, and they are some of the most important laws in all of physics. 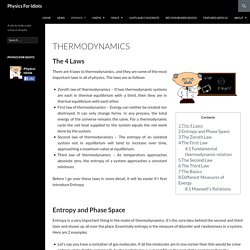 Before I go over these laws in more detail, it will be easier if I first introduce Entropy. Create your Own Temperature Scale. Chemical Reactivity. The term energy is commonly used in many contexts, but seldom in a carefully defined way. 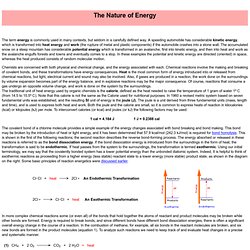 Catalysis in industry. Catalysts are substances that speed up reactions by providing an alternative pathway for the breaking and making of bonds. 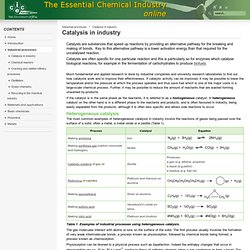 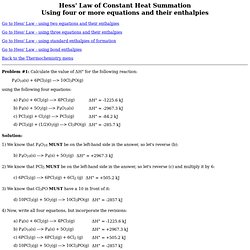 Chemistry: The Central Science, Chapter 5, Section 7. By using the methods we have just discussed, we can calculate the enthalpy changes for a great many reactions from tabulated H values. 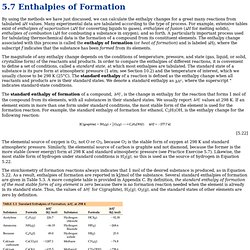 Many experimental data are tabulated according to the type of process. Enthalpy (Chapter 5) Enthalpy In the previous section we defined enthalpy as being the heat transferred during a constant pressure process. 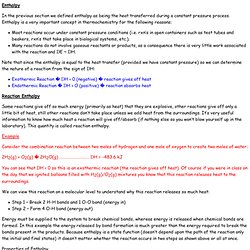 Enthalpy is a very important concept in thermochemistry for the following reasons: Most reactions occur under constant pressure conditions (i.e. rxn’s in open containers such as test tubes and beakers, rxn’s that take place in biological systems, etc.). Many reactions do not involve gaseous reactants or products, as a consequence there is very little work associated with the reaction and DE ~ DH.

Hess's Law and enthalpy change calculations. First you have to design your cycle. 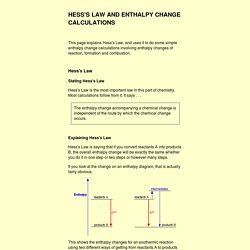 Write down the enthalpy change you want to find as a simple horizontal equation, and write ΔH over the top of the arrow. (In diagrams of this sort, we often miss off the standard symbol just to avoid clutter.) Then fit the other information you have onto the same diagram to make a Hess's Law cycle, writing the known enthalpy changes over the arrows for each of the other changes. Finally, find two routes around the diagram, always going with the flow of the various arrows. 5.6a Standard Heat of Formation. Enthalpy change values that are tabulated under standard conditions are indicated with a superscripted ° symbol, as in ΔH°rxn. 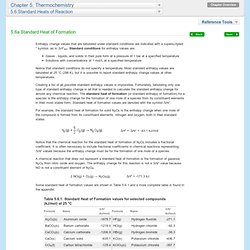 Standard conditions for enthalpy values are: Gases , liquids, and solids in their pure form at a pressure of 1 bar at a specified temperature Solutions with concentrations of 1 mol/L at a specified temperature Notice that standard conditions do not specify a temperature. Most standard enthalpy values are tabulated at 25 °C (298 K), but it is possible to report standard enthalpy change values at other temperatures. Thermodynamics. In physics and chemistry, thermodynamics is the study of energy conversion between heat and mechanical work, and subsequently the macroscopic variables such as temperature, volume and pressure. 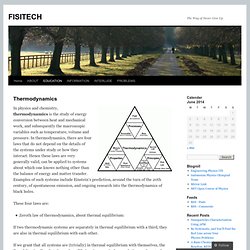 In thermodynamics, there are four laws that do not depend on the details of the systems under study or how they interact. Hence these laws are very generally valid, can be applied to systems about which one knows nothing other than the balance of energy and matter transfer. Solutions. The properties of solutions are dominated by the intermolecular forces between solute and solvent. 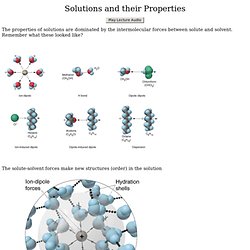 Remember what these looked like? The solute-solvent forces make new structures (order) in the solution But the solute breaks up the structure (order) that the liquid solvent may already have. Some dissolution processes are quite complex and depend on different sides of a molecule doing different things. Such is the case with the action of SOAP (detergent) on a grease stain. Solids and Gases make solutions. 11.7 Phase Diagrams. Chemistry Unit 2A - Chemistry in the home. Exothermic reactions are used in many situations around the home to produce an increase in temperature.

Endothermic reactions are less common, but these will cause a reduction in the temperature of the surroundings. You can carry out the following experiments to investigate energy change in reactions. Experiment: Mini experiment Add one teaspoon of baking soda and one teaspoon of citric acid to a glass. Alternatively, use some sherbet from a lolly shop added to water, as this will cause the same chemical reaction to occur. Exothermic activity This is a more involved experiment that compares energy given off from a variety of food products.

Science.blurtit. Chemistry. Section 4: Heat, Work, and Internal Energy. SCH4U: Calorimetry. Thermochemistry and calorimetry. 1 Thermochemical equations and standard states In order to define the thermochemical properties of a process, it is first necessary to write a thermochemical equation that defines the actual change taking place, both in terms of the formulas of the substances involved and their physical states (temperature, pressure, and whether solid, liquid, or gaseous. To take a very simple example, here is the complete thermochemical equation for the vaporization of water at its normal boiling point: H2O(l, 373 K, 1 atm) → H2O(g, 373 K, 1 atm) ΔH = 40.7 kJ mol–1. Concepts in Biochemistry - Concept Reviews. Thermodynamics - it is an impressive term that might seem more than just a little intimidating at first. Luckily, like many things, once you get to know it a bit, it’s not as mysterious and difficult as it seemed at first.

Energy and Chemical Changes. Free Energy Calculations- Trier - Confluence. Free Energy Calculations-Enthalpy, Entropy, Standard Heat Of Formation Before we begin.... Exothermic and Endothermic Reactions - Mr Carson's Science Page. Heat (enthalpy) of Reaction. Key Concepts. Introduction to the Second Law of Thermodynamics: Heat Engines and Their Efficiency. Second law of thermodynamics. A simple, everyday statement of the second law is that it is impossible for heat to flow 'uphill' of its own accord. Science aid: Enthalpy Change. SCH4U Standard Heats of Formation and Hess's Law. 4 Ways to Calculate Joules. Edit Article Calculating Joules as WorkCalculating Joules as Kinetic EnergyCalculating Joules as Electrical EnergyCalculating Joules as Heat Edited by IngeborgK, Gaurang, Lutherus, Jack Herrick and 6 others. Hess' Law - using three equations and their enthalpies.

Answer to the Cold Drink Problem - thermal equilibrium between ice and water. At a bar, there is a bucket containing ice, some of which has melted. A bartender gets an ice cube weighing 20 grams from the ice bucket and puts it into an insulated cup containing 100 grams of water at 20 degrees Celsius. Will the ice cube melt completely?