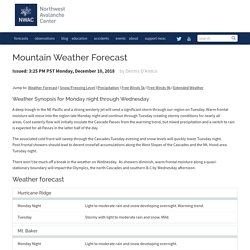 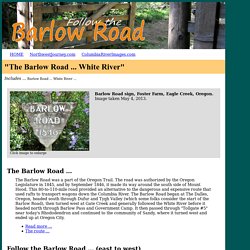 (original route/Smock Road) The early Barlow Road route crosses Gate Creek a little over 5 miles upstream from where Gate Creek merges into Rock Creek. Between 1846 to 1852 the first of five tollgates operating on the Barlow Road was established at this Gate Creek crossing. The route on the 1860 cadastral survey for T4S, R12E, shows the "Immigrant Road" crossing Rock Creek and heading southwest to Gate Creek, where it then turns west following Gate Creek's north bank until it crosses in T4S, R11E, Section 35. The route shown on the 1872 cadastral survey map shows "Road Across the Cascades to Barlow's Gate" crossing at the same location, but entering the area from the northeast. Gate Creek - Oregon Trail: Barlow Road. West of the Tygh valley, the emigrants moved along a grassy ridge about 10 miles to Rock Creek, a tributary to the White River. 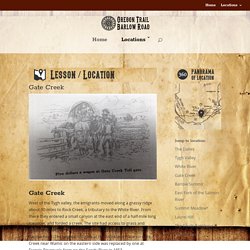 From there they entered a small canyon at the east end of a half-mile long meadow, and forded a creek. The site had access to grass and water, and became the location for the first toll gate along the Barlow Road. Hiking the Pacific Crest Trail: Oregon: Section Hiking from Donomore Pass to ... - Eli Boschetto - Google Books. Oregon Field Guide. Use one of the services below to sign in to PBS: You've just tried to add this video to your Watchlist so you can watch it later. 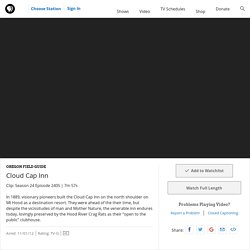 But first, we need you to sign in to PBS using one of the services below. You’ll be able to manage videos in your Watchlist, keep track of your favorite shows, watch PBS in high definition, and much more! GIS Division. What is GIS? 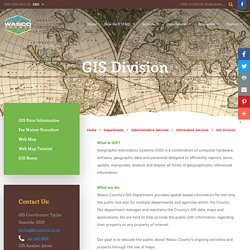 Geographic Information Systems (GIS) is a combination of computer hardware, software, geographic data and personnel designed to efficiently capture, store, update, manipulate, analyze and display all forms of geographically referenced information.What we do:Wasco County's GIS Department provides spatial based information for not only the public but also for multiple departments and agencies within the County. Our department manages and maintains the County's GIS data, maps and applications. We are here to help provide the public with information regarding their property or any property of interest.

Wasco County Base Map. Mazamas: An abbreviated history. The Mazamas and its members were among the early leaders of Oregon, and they figure prominently in the epic story of the state. 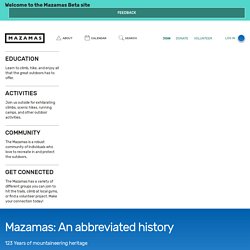 William Gladstone Steel, a no-nonsense postman, was the driving force behind the Mazamas. Steel wanted to establish a climbing organization run by climbers for climbers. He was adamant that summiting a glaciated peak be a requirement for membership, a threshold that remains today. As if founding a new organization was not enough, Steel was also advocating for the creation of Crater Lake National Park. His seventeen years of work paid off when President Theodore Roosevelt signed the Park into law. Swim – Mt. Hood History. The resort community of Swim was once located at the base of Multorpor Mountain near Government Camp.

It was established sometime prior to 1924, when it appears on the USGS topo map. A post office opened there in 1925, with resort owner Boyd Summers named postmaster. In 1928 two different advertisements ran in the Oregonian on June 15 and on August 10 listing the features and amenities of the resort, including fishing, hiking, campgrounds, a store, cabins, and “hot tub baths of radio active mineral water.” Pool at Swim Resort (sign on pole says “Swimming Pond Warm Mineral Water” and sign on building says “Mt.

March. Albert Bierstadt’s magical 1869 vision of Mount Hood Long before white settlement had reshaped the American West, artists were traveling with early explorers to capture scenes of the stunning landscape and native peoples. 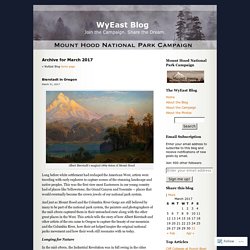 This was the first view most Easterners in our young country had of places like Yellowstone, the Grand Canyon and Yosemite — places that would eventually become the crown jewels of our national park system. And just as Mount Hood and the Columbia River Gorge are still believed by many to be part of the national park system, the painters and photographers of the mid-1800s captured them in their untouched state along with the other great places in the West.

Mount Hood WebCams. Mt. Hood Meadows Webcams. 1 climber dead in Mount Hood fall, six others rescued. Newest story: Climber dies after falling on Mount Hood: 'He started cartwheeling' GOVERNMENT CAMP -- A climber died after falling from a ridge on Oregon's tallest peak Tuesday, and at least one other was injured, according to the Clackamas County Sheriff's Office. 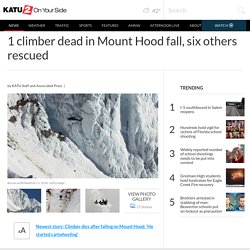 Crews were able to rescue six others who were stranded on the steep slopes of Mount Hood. Dozens of rescuers were called into action to rescue a total of seven climbers just before 10:30 a.m. The climbers were stranded in the Hogsback area of the mountain. Clackamas County Sgt. Lost Man Maps. 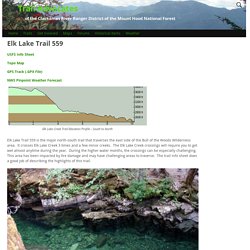 Historical Items – Trail Advocates. Here are some historical items of interest Oregon Skyline Trail. Your access to this site has been limited. Your access to this service has been temporarily limited. Please try again in a few minutes. (HTTP response code 503) Reason: Advanced blocking in effect. Important note for site admins: If you are the administrator of this website note that your access has been limited because you broke one of the Wordfence advanced blocking rules.