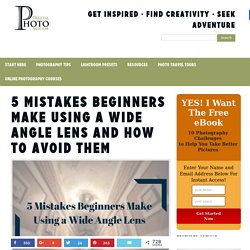 Many beginners get a really nice wide lens, a 50mm lens (because someone said they should) and a longer zoom len1s, then assume they have everything covered because they have focal lengths from 10mm (for a cropped or APS-C sensor camera) to 300mm. But the biggest mistake is not understanding how lenses work, and why you want each of those. In this article we’re going to look at wide angle lenses. What they do, how to use them, and how to avoid the five most common mistakes beginners make using them. Are you making these mistakes with your wide angle lens? Everything in the image is equal distance from the lensHaving no clear subject in the imageUsing a wide angle lens just to be able to fit more “stuff” in the imageTaking unflattering photos of peopleShooting wide for no reason. 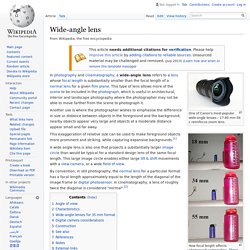 How focal length affects photograph composition. Three images depict the same two objects, kept in the same positions. By changing focal length and adjusting the camera's distance from the pink bottle, it remains the same size in the image, while the blue bottle's size appears to dramatically change. Also note that at small focal lengths, more of the scene is included. Another use is where the photographer wishes to emphasise the difference in size or distance between objects in the foreground and the background; nearby objects appear very large and objects at a moderate distance appear small and far away. This exaggeration of relative size can be used to make foreground objects more prominent and striking, while capturing expansive backgrounds.[1] What lens do I need? A guide to buying your next camera lens.

Despite buying cameras which have been specifically designed to take and make use of different lenses, a large number of photographers only ever use the kit lens that their DSLR or interchangeable lens camera came with. 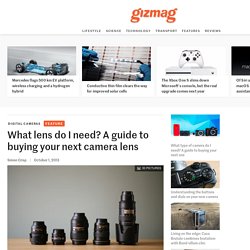 But it's really not that surprising, picking the right next lens can be daunting, which is why we're going to try to help with our guide to life after the kit lens. Lenses are arguably the most important part of your camera set-up, they make or break your pictures. They control the image that's projected onto your imaging sensor, and ultimately what photos you are taking home. As such, many photographers would prefer to shoot with an okay camera and a great lens, than a great camera with ho-hum glass attached. But knowing the importance of good glass is one thing, it's another to know what lens will give you the creative freedom to capture the photos you want to get. Rokinon 12mm F2 0 NCS CS Ultra Wide Angle Lens for Samsung NX. The First Sony E-Mount Lenses You Should Buy. Sony’s interchangeable-lens cameras come in two flavors: those with full-frame 35mm sensors and those with smaller but still great APS-C sensors. 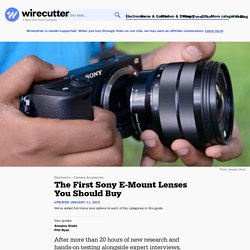 This guide is exclusively for owners of the latter class of camera—we’ll talk about Sony’s lens-mount system in a bit. For now, be assured that whether you own an older NEX-branded Sony camera or a newer a5000- or a6000-series model, these lenses will work just fine on them. If you don’t shoot with a Sony camera but still want to invest in some great starter lenses, take a look at our lens guides for Canon, Nikon, Micro Four Thirds, and Fujifilm bodies. Table of contents Why you should trust me I’ve worked as a professional photographer and digital-imaging consultant for close to 15 years. In researching for the latest version of this guide, I pored over spec sheets for Sony’s entire E-mount lens lineup, read more than 50 reviews, and took our final picks out for some real-world shooting. E 10–18 mm F4 OSS. E 55–210 mm F4.5-6.3 OSS.