Chapter 31. Chap 1 classification of fungi. Fungi I - Evolution and Diversity, Phyla Chytridiomycota and Zygomycota - BIOL110F2012 - Confluence. This tutorial will cover the vast and variable Kingdom Fungi, and its impact on the environment. 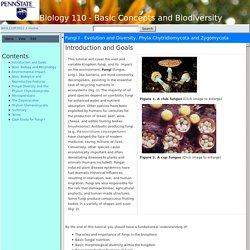 Fungi (fungus, sing.), like bacteria, are most commonly decomposers, assisting in the essential task of recycling nutrients in ecosystems (Fig. 1). The majority of all plant species depend on symbiotic fungi for enhanced water and nutrient absorption. Other species have been exploited by humans for centuries for the production of bread, beer, wine, cheese, and edible fruiting bodies (mushrooms). Antibiotic-producing fungi (e.g., Pennicillium chysogenum) have changed the face of modern medicine, saving millions of lives. Conversely, other species cause economically important and often devastating diseases to plants and animals (humans included).

Figure 1. Figure 2. By the end of this tutorial you should have a fundamental understanding of: Performance Objectives(these are the same for Tutorials 16 and 17): Microsporidians Chytridiomycota Zygomycota Glomeromycota Ascomycota Basidiomycota. Ways of Enlichenment - Lichens of North America. Consortium of North American Lichen Herbaria.

The Consortium of North American Lichen Herbaria (CNALH) was created to serve as a gateway to distributed data resources of interest to the taxonomic and environmental research community in North America. 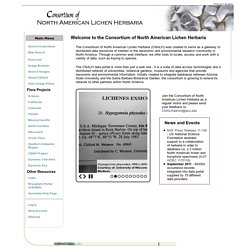 Through a common web interface, we offer tools to locate, access and work with a variety of data, such as keying to species. The CNALH data portal is more than just a web site - it is a suite of data access technologies and a distributed network of universities, botanical gardens, museums and agencies that provide taxonomic and environmental information.

Initially created to integrate databases between Arizona State University and the Santa Barbara Botantical Garden, the consortium is growing to extend its network to other partners within North America. Join the Consortium of North American Lichen Herbaria as a regular visitor and please send your feedback to CNALHadmin@asu.edu. Gallery of Featured Fungi. Featured Fungus Number 1 Seifertia azaleae Cause of Rhododendron Bud Blast Also known by various synonyms such as Briosia azaleae and Pycnothysanus azaleae, scientists recently found the fungus on several Rhododendron species and cultivars not previously known to be affected by this pathogen in the Pacific Northwest. 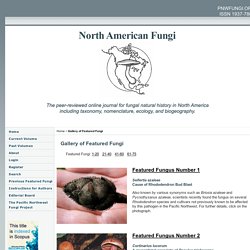 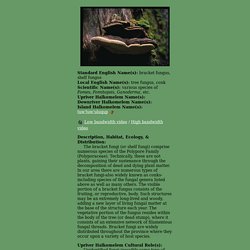 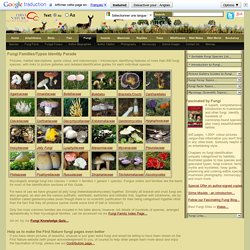 Fungus orders and families are the basis for most of the Identification sections of this Guide. For ease of use we have grouped all jelly fungi (heterobasidiomycetes) together. Similarly all bracket and crust fungi are also grouped, as also are the various puffballs, earthballs, earthstars and stiltballs that, together with stinkhorns, are by tradition called gasteromycetes (even though there is no scientific justification for their being categorised together other than the fact that they all produce spores inside some kind of ball or 'stomach').

Go on: try our Fungi Knowledge Quiz... Shelf fungi. Encyclopedia Britannica. Basidiomycota, a large and diverse phylum of fungi (kingdom Fungi) that includes jelly and shelf, or bracket, fungi; mushrooms, puffballs, and stinkhorns; and the rusts and smuts. 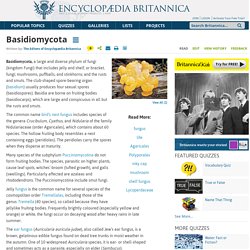 The club-shaped spore-bearing organ (basidium) usually produces four sexual spores (basidiospores). Basidia are borne on fruiting bodies (basidiocarps), which are large and conspicuous in all but the rusts and smuts. The common name bird’s nest fungus includes species of the genera Crucibulum, Cyathus, and Nidularia of the family Nidulariaceae (order Agaricales), which contains about 60 species. The hollow fruiting body resembles a nest containing eggs (peridioles). The peridioles carry the spores when they disperse at maturity. Many species of the subphylum Pucciniomycotina do not form fruiting bodies. Jelly fungus is the common name for several species of the cosmopolitan order Tremellales, including those of the genus Tremella (40 species), so called because they have jellylike fruiting bodies.