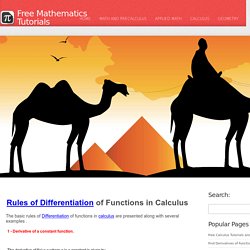 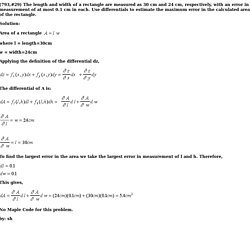 Math 21a Midterm I Review. Lab3-.html. Functions of two variables Let us start with a simple function -- the distance between the point (x,y) and the origin. 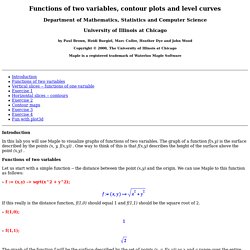 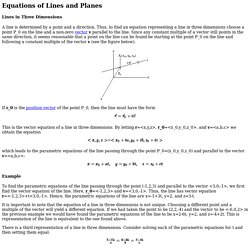 Thus, to find an equation representing a line in three dimensions choose a point P_0 on the line and a non-zero vector v parallel to the line. Since any constant multiple of a vector still points in the same direction, it seems reasonable that a point on the line can be found be starting at the point P_0 on the line and following a constant multiple of the vector v (see the figure below). If r_0 is the position vector of the point P_0, then the line must have the form This is the vector equation of a line in three dimensions.

ProblemsSection9.5.html. Everything Maths and Science. Decide how to tackle the problem The first thing we must realise is that the order that we add the vectors does not matter. 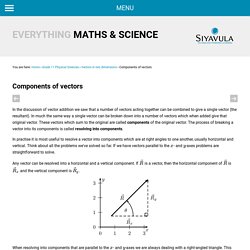 Therefore, we can work through the vectors to be added in any order. CIRCULAR MOTION,2D motion,mechanics revision notes from A-level Maths Tutor. Summary of equations Describing the circle - position vector R i & j are unit vectors along the x and y-axis respectively. 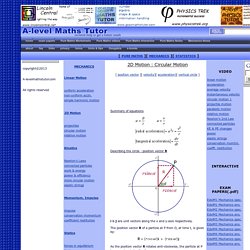 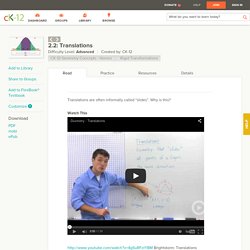 Why is this? Guidance A translation is one example of a rigid transformation . Presentation1 yash maths. Quick Reference Guide. Quadcopter Math and Modelling: May 2014. The center of mass is the unique point at the center of a distribution of mass in space that has the property that the weighted position vectors relative to this point sum to zero. 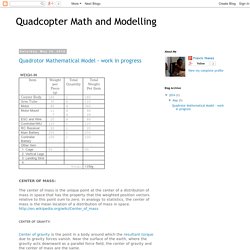 In analogy to statistics, the center of mass is the mean location of a distribution of mass in space. Center of gravity is the point in a body around which the resultant torque due to gravity forces vanish. Point, Line, Plane. In what follows are various notes and algorithms dealing with points, lines, and planes. 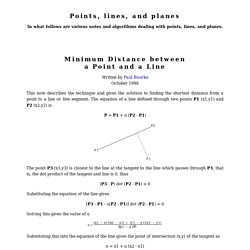 Written by Paul Bourke October 1988 This note describes the technique and gives the solution to finding the shortest distance from a point to a line or line segment. The equation of a line defined through two points P1 (x1,y1) and P2 (x2,y2) is P = P1 + u (P2 - P1) The point P3 (x3,y3) is closest to the line at the tangent to the line which passes through P3, that is, the dot product of the tangent and line is 0, thus. How to Plot Points in Three Dimensions: 8 Steps. Index. 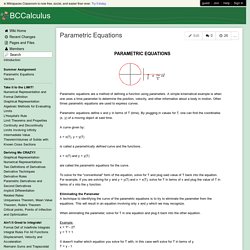 A simple kinematical example is when one uses a time parameter to determine the position, velocity, and other information about a body in motion. Often times parametric equations are used to express curves. Math.sci.ccny.cuny. Volume of Right Circular Cone - ProofWiki. Calculus, by Smith and Minton. Surface Area Figure 5.38 Surface of revolution. The only problem with this is that we don't know Figure 5.39a Right circular cone. Figure 5.39b Flattened cone. Figure 5.40 Frustum of a cone. 6+ integral [a,x] (f(t)/(t^2))dt = 2sqrt(x) for x>0. How do you find function f and number a? VisualCalc. Geometry I WS 12. Cross-ratio of lines through a point (again). Claim. The map which maps a point g∗∈p∗ to the intersection point of g∩ℓ is a projective map. Proof. Let {b1,b2,b3} be a basis of R3, such that P=[b1] and ℓ=P(span{b2,b3}). This yields a dual basis {b∗1,b∗2,b∗3} of R3 with b∗i(bj)=δij.

Let g∗=[sb∗2+tb∗3]∈p∗ be a point on the line P∗. 0=(sb∗2+tb∗3)(xb2+yb3)=sx+ty. Solving this for x and y yields the following point of intersection Q=g∩ℓ=[−tb2+sb3], so the map P∗→ℓ is given by g∩ℓ=[(0−110)(st)] for g=[sb∗2+tb∗3]. Archimedes and the area of an ellipse: an intuitive approach. Tangent Line: Definition & Equation. Free online math calculators and solvers. Here you can find variety of powerful online math calculators and solvers for problems including polynomial equations, rational expressions, systems of equations, vectors, matrices, complex numbers, analytic geometry, statistics... These calculators can help you with basic and advanced problems in high school and college math. All of them are capable of performing exact computations. Also, almost every of them will generate a step by step explanation. All calculators have simple and easy-to-use interface. 1. Arithmetic Operations With Polynomials - This calculator performs arithmetic operations with polynomials i.e., addition, subtraction, multiplication and division.

Synthetic Division Calculator - Divide polynomials, determine remainder, check if x-c is factor. Expand and Simplify Polynomials - This calculator will expand and simplify any polynomial. Polynomial Roots Calculator - finds the roots of any polynomial. 2. Or . 3. Or even 4. And 5. 6. 6.1 Triangles 6.2 Quadrilaterals 6.3 Circle. Numerical integration. Some functions cannot be integrated analytically (on paper). The integrals above cannot be solved analytically, that is, on paper. They can't be expressed exactly as some combination of elementary functions. Another way to say it is that for each of those integrals above (and many others), there is no combination of trigonometric, polynomial, root, exponential or logarithmic functions that can be found which, when differentiated, give back the integrand you're working with.